Orchard Hill: It’s worth the climb 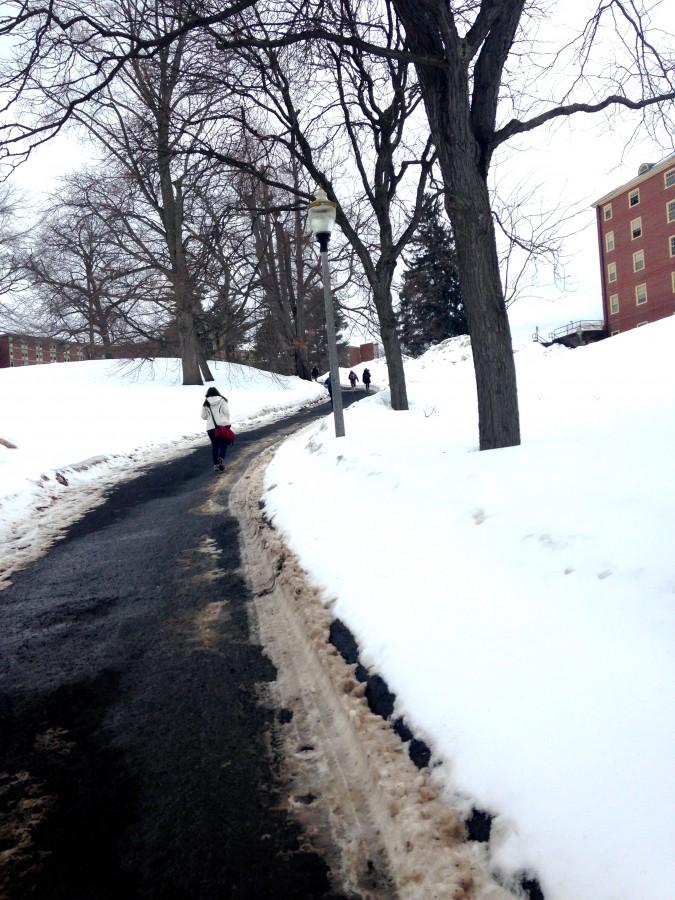 On top of a steep hill, far above the rest of the University of Massachusetts Amherst campus, one residential area impresses with stunning views and gorgeous sunsets. The atmosphere is laid-back, the people are especially friendly, and the freshman fifteen “isn’t really a thing.”

It may sound too good to be true, but that’s how Orchard Hill residents describe their home.

“I like the Hill a lot, but I don’t want housing [selection] to get super competitive, so I almost don’t want to say anything!” joked Dan Kallin, a chemical engineering major.

Orchard Hill, past Franklin dining common and behind the Chancellor’s house, is a large but secluded residential area. There are four buildings: Webster and Dickinson for freshmen and Field and Grayson for multi-year students. Webster also houses a Commonwealth Honors College satellite community.

Unlike most dorms at UMass, the rooms in Orchard Hill are equipped with two built-in closets instead of wardrobes, and one long, faux-granite desk instead of two smaller ones. Many residents like the unique set up. The rooms are symmetrical, which makes it easy for roommates to divide up the space. Fixed furniture, however, doesn’t allow for much creativity.

“You can only arrange the rooms in a few ways,” said Manon Garulay, a German major. “There’s not a lot of freedom to redecorate because the closets and desks don’t move.”

There are plenty of places around the Hill to meet new people, do homework, and catch up with friends. Many residents leave their doors open or hang out in the lounges on each floor.

“I’m in the lounge more than my room,” said Ashley McDermott, an English major.

Lounges on the first floor have ping pong, pool, and air hockey tables as well as vending machines. Kitchens are scattered throughout the buildings for students to use. And if residents are looking for a quieter space to study, there are classrooms in the buildings, free to use whenever they’re empty.

When it’s time for a study break, Sweets and More, a student-run business on the first floor of Field, offers snacks, ice cream, milkshakes, and baked goods from 8 p.m. to midnight. Baby Berk makes an appearance most nights, which is a lifesaver for tired and busy students who don’t want to make the trip  back down the hill for food.

The truth is, the hill is steep. And residents either love it or loathe it.

McDermott has grown to appreciate it. “It’s actually kind of made me into more of a walker,” she said. “We have a joke that the freshman fifteen isn’t really a thing here.”

Garulay still remembers the first time she climbed the hill, on move-in day. “I didn’t know what I was getting into. I was exhausted coming back from band camp. I saw the hill, and I was kind of scared, like, ‘Oh my God, do I have to do this every day?'”

Marketing major Julia Lugten admits that “if [she’s] really swamped with work, [climbing the hill] is a little inconvenient,” but she added that she and her friends have no trouble making it down to eat dinner at Southwest’s Hampshire dining common every night.

On a nice day, you’ll find a lot of people in the Bowl, a large, sloping lawn in the center of the four buildings. Residents say it’s a great place to play soccer or Frisbee, or to just hang out. Often, there are musicians playing guitar or saxophone. In the spring, it’s the stage for Bowl Day, a festival with food, music, and games for Orchard Hill residents.

Most agree that there’s a real balance between work and play on the Hill. Separated from the rest of UMass’ bustling campus, it can be a quiet place to get work done or to catch the best sunsets on campus.

“I was pleasantly surprised by Orchard Hill. Everyone’s very friendly, and there’s a laid back, down-to-earth, peaceful atmosphere,” McDermott said. “I guess what surprises me most is how much it feels like home.”