After last semester's emotional uproar, students and faculty work to develop a plan to increase racial diversity at UMass Amherst. But it's a slow-moving process and not everyone is satisfied with beginning stages. 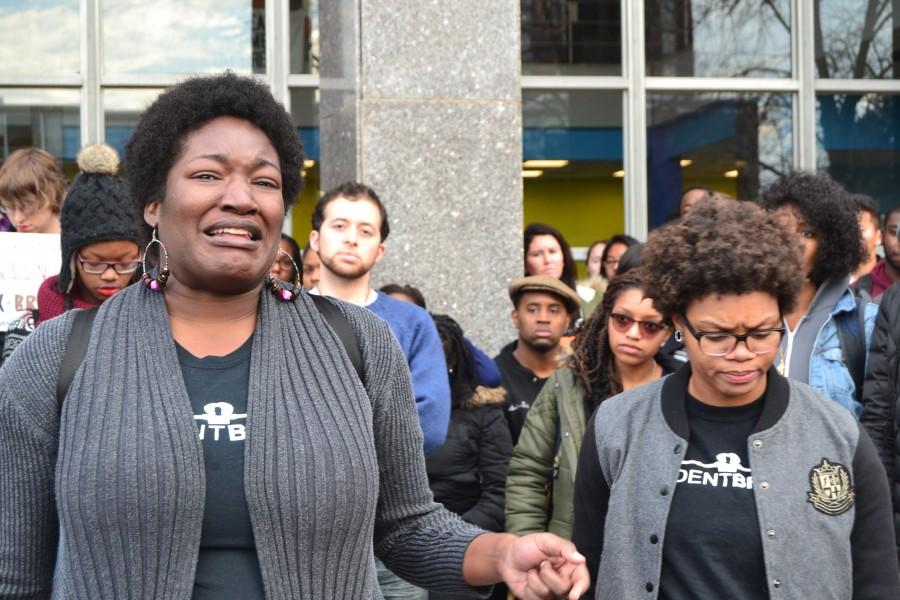 One evening last October, over 500 University of Massachusetts Amherst students, faculty, and staff crowded around tables, lined all four walls, and spilled out the doorways of the packed Student Union Ballroom. The students stood scores-deep at the microphone, many wearing ‘UMass Stands Against Racism’ tee-shirts, to talk about their personal experiences with racial tension on the flagship campus. The energy of the emotional forum brought to light a harrowing lack of diversity, equity, and inclusiveness among Minutemen.

Just a week before, news of three incidents of racially-motivated vandalism galvanized students and faculty who were already captivated by developments in Ferguson, Missouri and New York. Students demanded that the UMass administration take action.

Fast forward four months: March, 2015. It’s another town meeting, this time to talk about a draft proposal of action to tackle diversity. The atmosphere is strikingly different. Instead of hundreds of bodies, swelling silence fills the Campus Center Auditorium, where about 50 attendees sit, scattered seven, eight, and nine seats apart. Members of the Diversity Strategic Planning Steering Committee sit at a table in front, looking out into the cavernous room. One by one, seven students rise and approach the microphone to offer feedback on the committee’s draft plan.

Instead of applause and cheers in support, the only sounds heard are finger snaps.

Long after the immediate and fleeting outrage of the larger campus community, a handful of determined student leaders continue to invest in the diversity committee’s plan. Their tireless fight, Jishava Patel says, “has been a very long and quiet [one]. But it’s a fight that’s been happening.”

The group of students, members of campus organizations including the Center for Education Policy and Advocacy (CEPA), the Graduate Student Senate (GSS), and the Black Student Union (BSU), attributed the February forum’s low turnout to administration’s poor scheduling. Many students were still in class during the late-afternoon meeting, held at the same time as a Commonwealth Honors College Dean Search presentation.

One problem is a difference in perspective between white students and students of color. The diversity committee found that, while 32 percent of students of color agreed that there is racial tension at UMass, only nine percent of white students agreed. Patel, a grassroots organizing and social movements major, called for more student engagement and diversity education, particularly among non-minority students.

“[These conversations] need to be institutionalized,” Patel said. “Especially for [the people] who are able to go on and live their daily lives to the fullest without talking about [diversity]. For them to be [talking] gives this so much weight. That’s the urgency that is needed to keep these conversations going mainstream.”

Deputy Chancellor Robert Feldman, chair of the diversity committee, admitted this lack in awareness on campus.

“I think if we talk to the average person walking by,” the professor of psychology said, pointing out his Whitmore office window at the throng of students below, “they would have only a vague idea of what is going on.”

Patel said more open forums, at more convenient times, would encourage community awareness and involvement. At the February forum, she and other active student leaders asked for regular meetings between student organizations and the diversity committee. They believe it is necessary for students to have a more direct influence throughout the planning process.

GSS vice president Dani O’Brien says that it’s up to the administration to increase community involvement.

“While it’s not to say that it’s not great to have a website where you can go and comment,” she continued, “that is not the administration actively getting input.”

The diversity committee is one piece of the larger strategic planning and assessment process that began at UMass over two years ago. Last spring, at the urging of students like Patel and O’Brien, Chancellor Kumble Subbaswamy appointed the subcommittee to produce a plan to increase campus diversity. The urgency of the committee’s mission picked up as emotions bubbled over last semester, and committee members met weekly to write their 35-page draft, drawing from feedback presented at the October meeting and submitted online.

But many said the draft report lacks the urgency expressed at the first public forum.

“We don’t feel the humanity [and the empathy] in this document,” GSS international students coordinator Javier Campos-Martínez said, holding up a copy of the draft released late-January. “The story of UMass,” he continued, “[is] having this moment of catharsis and then having the administrators drop the ball.”

But Feldman responded that this  “look in the mirror” was a necessary starting point.

O’Brien said accountability is a means of tracking progress. She and fellow student leaders insist that the plan’s final draft has a system of accountability that looks forward and not behind, with definite methods, goals, and timelines attributed to particular university offices or individuals.

“If it’s just these ideas,” she said, hands groping the empty air in front of her, “then it means that in the end we’ll be having this conversation and making this same plan every five years or so.”

Fast forward five years or so. Will the plan in Campos-Martínez’s hands, and in the forefront of student leaders’ minds, truly transform? More importantly, how?

The diversity committee will release a second version of its strategic plan next week. Feldman said “[this] second, and presumably final, draft” should specifically address the hateful vandalism that electrified students and faculty last fall. He also said the plan will name specific groups or individuals responsible for implementing the committee’s recommendations. Since the February forum, several candidates have interviewed for the new position of assistant provost for diversity.

Campos-Martínez said the committee met with GSS once since the February forum.

“At the final draft, we’re going to know if we were really invited to be listened to or if we were just invited to validate whatever the [committee] already had planned,” he said. “If [our feedback and the final draft] don’t speak to each other… we’ll have to think about other ways in which we can bring our voices.”