Tattoos in the workplace: is there a right to bear ink? 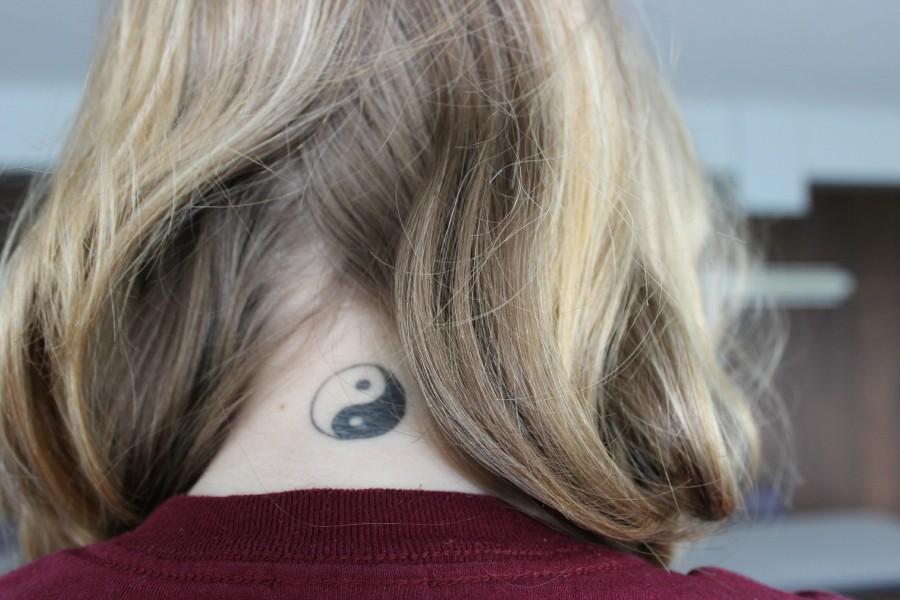 At a recent career fair at the University of Massachusetts Amherst, it was clear that businesses had a different opinion about tattoo culture in today’s society. Potential employees were uniformly dressed in clean-shaven faces, dark suits and steam pressed shirts. Women, though fewer and less uniform, were dressed in quarter sleeve blazers and sleek black trousers or below the knee skirts. The occasional colored shirt with a mismatch tie combination stuck out among the crowd of interviewees who moved from table to table like a school of fish. As I ducked and weaved to avoid handshakes and introductions, everyone stood around, hoping not to stand out in any unsavory way like the girl with the notebook and neck tattoo.

Tattoos shouldn’t be taboo. Almost a fourth of men and women between the ages of 18-64 have tattoos. The number of tattooed individuals in the United States has increased to 20 percent this year and has increased 13 percent since 2007. According to a survey done by Northwestern University in 2006, 36 percent of people from ages 18-29 had tattoos. On the other hand, only 11 percent of those aged 50-64 were recorded having tattoos. Through this generational gap, we’ve seen that the popularity of tattoos has increased only recently, but its increasing  popularity has also changed ideas about the people who have them.

The origin of tattoos dates back to the Yakuza mafia, founded in 17th century Japan, who were easily identified by their ink; these intricate designs stretched along their bodies resembling a decorative suit. In the United States, the tattoo of the five point crown originated in the 1940s as a symbol of the Latin Kings gang in Chicago, IL. Another example is the tear drop tattoo right under the eye, one of the most recognizable tattoos worn by gang affiliates or criminals, which signifies an act of murder. According to multiple tattoo blogs, such as “Get Inked,” this specific tattoo can be traced back to 1957 but made popular by rappers such as Lil’ Wayne.

All of this ink is worn by criminals drug dealers, murderers, and thieves. But when I watch my boss sitting at a nearby desk roll up the sleeves of her knit sweater,  I see a dainty script tattoo on the inside of her left wrist, and not a hardened criminal. As the secretary in front of her crosses her legs under the desk revealing a small colored tattoo on her ankle, again, my first thought is not a hardened criminal. Not all tattoos are created equal. Tattoos aren’t just associated with rebellious groups and crime, so why do we still see them as inappropriate in professional settings?

At the college fair, Tim S., who preferred not to give his full name, gave some insight as a recruiter for Northwestern Mutual, a major insurance company and financial network in the United States. Like many of its competitors, he described Northwestern Mutual as a “conservative” company. When asked about tattoos, Tim said with a slight grimace and a moment of hesitation, “Well there are other conservative ways to express yourself.” Breaking his tall posture, Tim reached down to lift the pant leg of his dark pinstriped suit, revealing a multi-colored striped sock.

“Progressive to us is fun socks and maybe a loud tie. You have to be able to sit across the table from grandma and not scare her away,” Tim started. “With that said, you could be the best member of my team and be all tattooed and I might never know.”

Proof of Tim’s theory was a younger employee named Tia, who also preferred not to give her last name. Tia may be new to recruiting for businesses here on campus but not new to the world of tattoo discrimination. Tia wore a long-sleeved beige blazer and floor length black trousers; no one would suspect that she had four tattoos. “I absolutely picked the placement of my tattoos thinking about job prospects in the future. Even when I was younger,” she said. The leg of her pants flared over her patent-leather heels to the floor, concealing the tattoo that adorned her foot.

“It’s hard enough being taken seriously as a blonde,” she said. “Throw in a big tattoo and forget my chances of any kind of professional career.”

The fear of having tattoos at work doesn’t just stop at college fairs. Starbucks revisited its dress code policy that forbid workers to have any visible tattoos at work. Starbucks baristas started to gather signatures for a petition in August 2014 to abolish the company’s tattoo-discriminating policy. The campaign, created by Starbucks employee, Kristie Williams, currently has 24,619 signatures

“Over 45 million Americans have tattoos. It’s art, it’s beautiful, and it’s inspiring,” Williams wrote on the main page of the petition. “It’s time for Starbucks to get with the times and have some tattoo acceptance in the workplace.” However, Starbucks is just the tip of the iceberg. The issue of tattoo discrimination is rooted much deeper in corporate America.

Although many businesses, like the Starbucks franchise, pride themselves on accepting diversity, they manage to discriminate. These developments may one day lead to a push for American’s right to bear their arms at work, even if they’re covered in tattoo ink.

Colleen Jones can be reached at [email protected]