Puffton Village: A home away from home 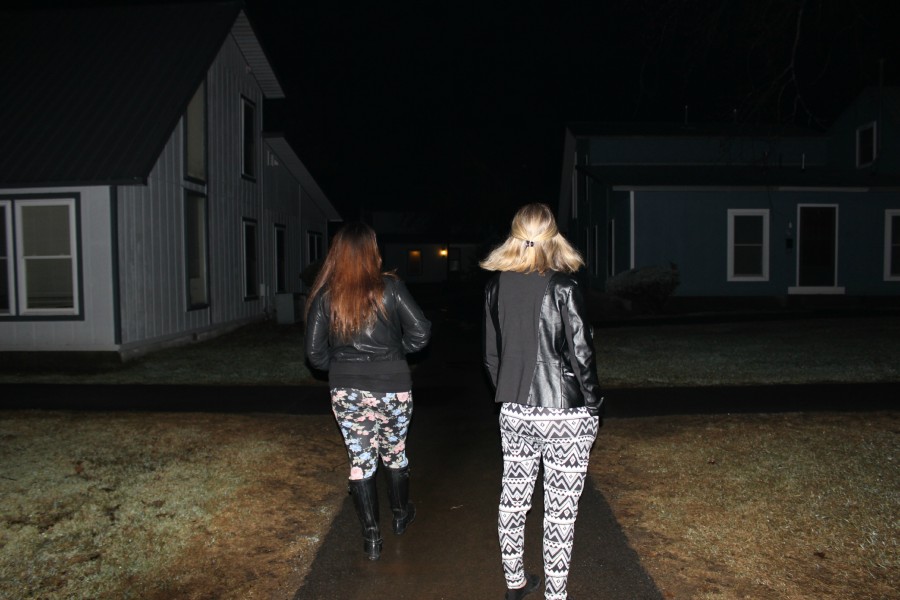 At the New Puffton Village stop on a Friday night, a steady flow of buses unloads passengers from Amherst Center and the Studio Arts Building in the heart of the University of Massachusetts Amherst campus. They rush out as if arriving in Disneyworld, weaving their way through the jungle of apartments. The partygoers keep asking each other, “What’s the address again?”

Puffton Village is a second Southwest for many students, a step-up from life in UMass dorms with fellow freshmen and sophomores, and a sequel that guarantees an even crazier time. It is one of, if not, the closest and cheapest off-campus housing option, at $1,850 per month for a three-bedroom townhouse, and it symbolizes freedom, a stride into the real world. For the past 47 years, 900 UMass students have called Puffton home each year and hopefully thousands more can for as long as the apartments stay standing.

“This is my second year living here, and we didn’t even think about living anywhere else,” said Alexis Melvin, a senior English and psychology double major. “It’s so convenient. They are very accommodating to students and it’s mostly students here, so I still feel like I have that kind of community we have in the dorms. It’s not like I moved off campus and I’m living with adults.”

Inside, it sounds like a festival; the thumping of the bass, Kanye West rapping that he writes his curses in cursive and the voices of students can be heard through the paper-thin walls of the apartments throwing galas. This place is alive.

Students who move to these off-campus apartments can peel off the shiny decal sticker on their UMass UCards that previously let them into their on-campus dorms past the 8 p.m. curfew. They no longer need to wait in line to sign in their four-guest limit or dread the knock of an RA who’s come to write them up for a funny smell; the days of pre-gaming in a tiny corner room are over.

On a nice day, residents pull out their grills, flipping burgers and popping open beers on lawns with neighbors. During the summer and winter breaks, it is a ghost town. Pets aren’t allowed, but a bark and a meow can be heard now and then.

Stephen Walczak, the manager of New Puffton Village, said UMass needed the apartments near the end of the 60’s when the university expanded so much that it experienced a housing crisis. The Village was built in three phases; students living in the apartments from the first and second phases might not know that their homes were constructed in Virginia and then brought over and assembled in Amherst like real-life doll houses. Apartments in the final stage were built on site and finished in 1972.

Although they had been built as somewhat temporary homes, Walczak said the apartments still had to meet housing qualifications. “They were given a normal life span for houses in New England. Obviously, at some point in time, as with any project, some structural changes will have to be made to Puffton.”

The different phases could be the reason the 378 apartments are numbered in a confusing way and why some apartments seem nicer than others.

“I think I’m in an older one,” said Ashley Hatstat, a 2014 UMass graduate. “The newer Puffton apartments are really nice and I think they are better looking on the outside. They have a nice door, a nice railing in their walkway, and they have a peephole in the door. We don’t have a peephole in our door. We had to get our screen door fixed and fix the windows when we moved in.”

The apartments’ glory days might have passed them by; other complaints include limited visitor parking and bedroom and bathroom doors that do not lock.

“The biggest problem I [have] is with visitor parking,” said Melvin. “There is very minimal visitor parking. If there is someone coming up, I have to park my car there to save the spot for the day, or by 6 p.m. on a Thursday or Friday, it’s gone.”

And the walls really are very thin.

“When I used to hang out at my neighbor’s house, I could hear my TV from their apartment, and they lived across from me. You can hear people whispering in the room next to you, and you can hear your neighbor’s music if they’re playing it at a moderate level,” said Hatstat.

But these middle-age apartments still have some goods to offer. Puffton is only half a mile from campus, offers lower rent than the North Apartments and Brandywine Apartments, and flaunts five tennis courts, one basketball court, and a swimming pool. Although there are only two bus stops, the route 30 buses come every 15 minutes, and trash gets picked up after weekend festivities. Residents say the maintenance staff is wonderful.

“Maintenance comes whenever you ask them, like the day of. We had not very updated kitchen appliances at first, but we got them all updated because they broke. They’re pretty good about putting new things in if you ask, but if you don’t, it’s just going to stay the same,” said Melvin.

Melvin also said she did not think of paying for utilities when she moved to Puffton. “I’ve always had cable and heat, but now I don’t unless I pay for it, so that’s different. That becomes another thing you have to think about.”

These apartments look like they’re here to stay, and Walczak said there’s been talk of long-term plans. “We talked seriously about talking to the town and building a community-type building, maybe a gym or a juice bar. We looked at that extensively to replace the existing laundry rooms and to give a gathering place.”

A bus pulls up at the end of the night to take its passengers back to where they came from. The party animals at UMass Amherst leave Puffton Village, only to come back next weekend to do it all again.

Hae Young Yoo can be reached at [email protected] or on Twitter @drinkyoohoo.