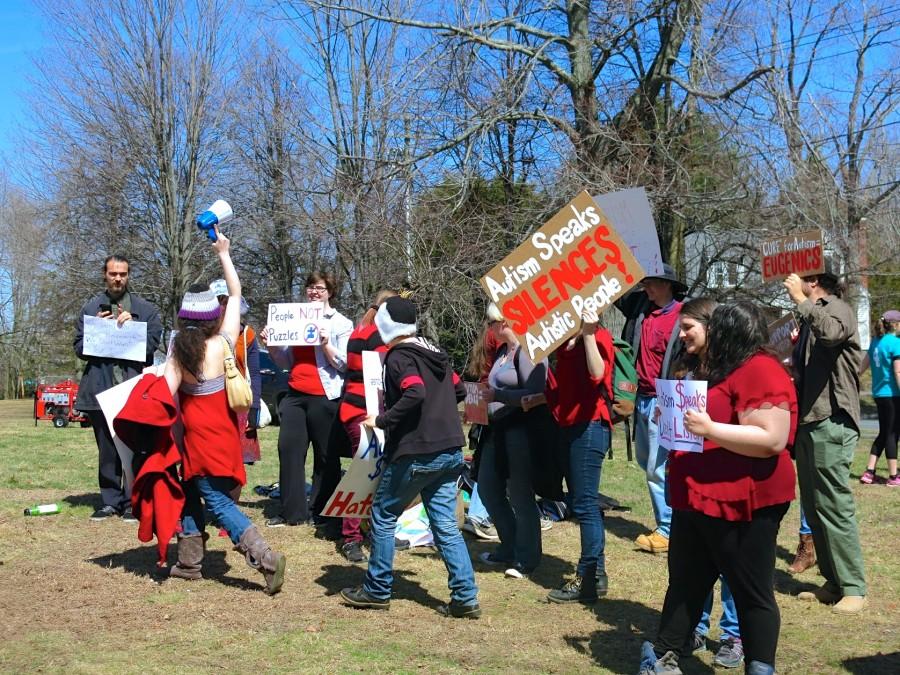 Autism Speaks held its seventh annual awareness fundraiser and 5K run on April 12 at Kendrick Park. The outreach effort was a success for the non-profit organization, raising nearly $31,000 for autism research. But for a group of local autistic protesters, the event marked a second year speaking out against the Autism Speaks mission.

The Don’t Speak For Me demonstrators arrived in time for event registration. Rebecca Binns, a substitute teacher at Nonotuck Community School, led the group, calling out and into her small megaphone that Autism Speaks is a hate group that supports eugenics.

“I am autistic and many of the people who came with me are also autistic,” Binns said. “[Autistic people] don’t want to be ‘cured.’ We think our neuro-diversity is a valuable part of human diversity. Just as race or gender.”

Binns has Asperger syndrome (AS), one of many disorders on the autism spectrum. Asperger’s is often characterized by social impairment, repetitive behaviors, difficulties with outward communications, and trouble reading body language. Binns said that, despite some difficulties, she loves the life she leads. She discourages the use of social programs like Applied Behavioral Analysis (ABA) and said that typical school settings with understanding teachers work best for those living with autism.

Binns once supported Autism Speaks, but recently, through online bloggers like Lydia Brown of Autistic Hoya, discovered the “disturbing” language the organization uses to represent her. She encourages people to donate to other organizations, like the Autistic Self Advocacy Network (ASAN).

Autism Speaks was founded by Bob and Suzanne Wright in February 2005, three years after their grandson, Christian, was diagnosed with autism. In 2010, about 44 percent of the funds raised went toward continued research into the brain functions and genetics of the autism spectrum.

So far, research has yet to yield answers to the causes autism. It was once theorized that vaccinations for certain diseases like measles caused it, a myth debunked by the Institute of Medicine. What research has discovered is that, at some point, a certain trigger goes off, allowing autism to develop. This genetic abnormality can be hereditary in families with histories of mental disabilities, but is still not a definite cause for it.

The autism spectrum is a range of verbal and non-verbal autistics. Mild diagnoses, like Asperger’s, are considered high-functioning forms of autism.

“More often, the case is that we have difficulty expressing what we’re thinking and feeling, and so people interpret that as not having any reaction,” Binns said, her voice competing with the shouts of Autism Speaks volunteers from UMass Amherst.

As children with autism enter into adulthood, the level of risk for anxiety or depression increases. Often, individuals living with non-verbal autism don’t speak very much. In some cases, this silence can last for years.

Kate O’Neil, one of the senior directors for field development at Autism Speaks, said that as far as she knows, the protest group is the only one in New England. Amherst is the only town where O’Neil has personally witnessed vocal protesters.

“I don’t really understand what their argument [is],” O’Neil said. “I wish we could talk to them, so we could [have] a real conversation about it.”

Members of the protest group did manage to speak with several curious fundraiser attendees, explaining why they protest the organization’s events.

“All [disabilities] should be valued as part of human diversity,” Binns said. “A cure by definition would be eugenics. A cure means that they’re going to look for the genes that cause autism [and] they’re going to try and eliminate it.”