Antonio’s: Stories by the slice 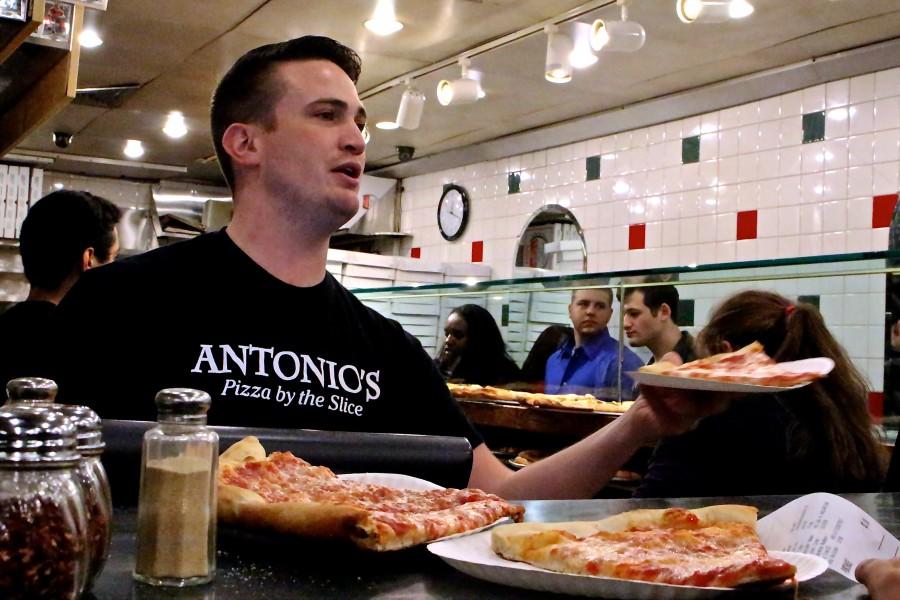 One late November morning in 2010, a man wearing a Bob Dylan backstage pass stumbled into Antonio’s and ordered 178 pizzas he claimed were for Dylan and the rest of his roadie crew. Workers stayed until 5:30 a.m. making the pies, but the imposter never returned.

When news of the late-night, $4,000 heist at their beloved pizza parlor reached Five-College alumni across the country, they sent notes of well wishes and donations to Antonio’s. The pizza-slinging team at the Amherst location was overwhelmed by the generosity of its loyal customers from as far away as California and Texas, and they returned the donations with gift cards to put toward future visits.

“People were shocked about what happened,” manager Jay Carreiro says of customer reactions, peering out from beneath the brim of his pepperoni pizza baseball cap. “They thought, ‘How could someone do this to Antonio’s?'”

The North Pleasant Street storefront with the perpetual line out the door is the well-loved icon of Amherst — the college town institution that students remember and talk about long after they flip their graduation cap tassel and move on to the “real world.”

It’s the shared experience that turns strangers into friends when they meet halfway around the world and discover they’re both from the Pioneer Valley and love the Chicken Florentine slice best.

It’s the cherished moment of youth that out-of-town customers re-experience when they toss the slices they’ve kept hidden in their freezer into the oven. When the stack of preserved pizza dwindles, they’ll willingly make the hours-long drive to Amherst to stock up again.

It’s the time capsule that, with a push on its wrought iron door, transports nostalgic visitors years back, to a time when they were carefree and, undoubtedly, really hungry.

Antonio’s is much more than an adventurous slice of pizza. 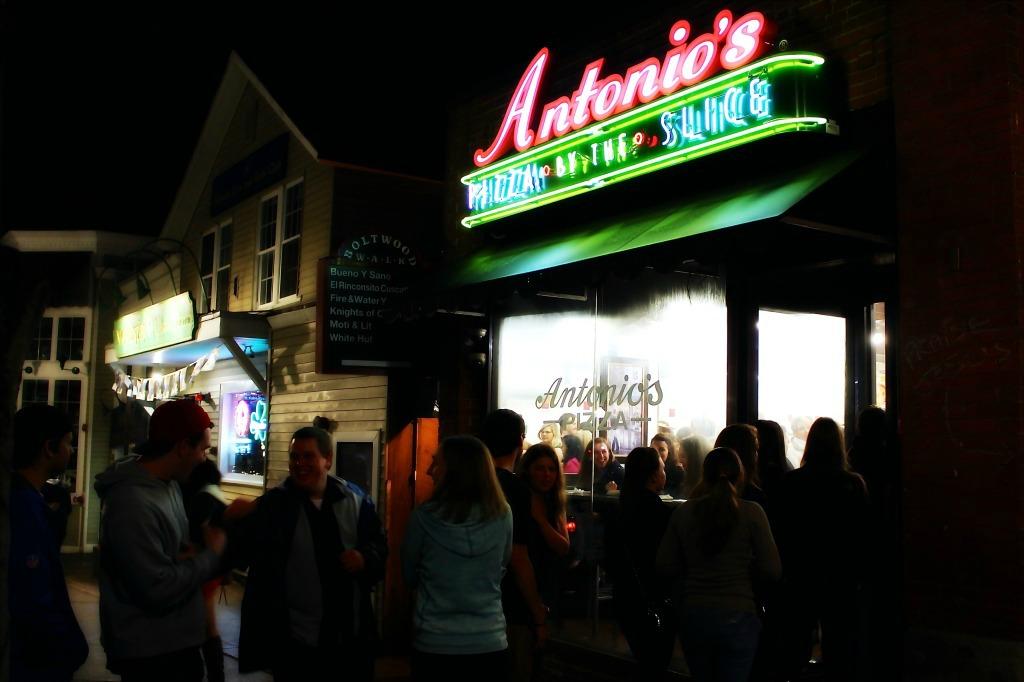 Once the clock on the wall strikes midnight on Friday nights, the workers behind the counter ready their game faces. They yank on the oven door and throw hundreds of slices onto an ever-dwindling stack of paper plates.

Robert Walters hollers over the boisterous crowd wandering in from Stackers Pub and Monkey Bar. Two early birds find a space at the front counter, taking bites of their cheese slices and sipping from the scorpion bowl they’ve, well, borrowed from Panda East.

From 12 a.m. until 2 a.m, the pizza oven, the same one used since the shop opened in 1991, is packed with cheese pies for Dollar Hot Cheese. Whole pies crowd surf over the counter and through the throng of customers that twists and turns out the door and onto the sidewalk down North Pleasant. Most are broke college students who can’t resist their favorite slices at the $1 bargain price.

Once inside, the crowd scatters and fills the 800 square foot shop. Some head right, for the gourmet slices on display behind the glass: Black Bean Avocado, Potato Bacon, and the extra cheesy Tortellini. They suck everything in as they shimmy down the deep, narrow aisle to the right of the L-shaped counter. The others wave their hands and clench fistfuls of dollar bills, huddling together like a stack of cardboard pizza boxes on the left.

“A box?” Walters, the assistant manager, asks one customer. “You need this in your belly. It’s hungry time!”

On weekend nights, when bombarded by the high-spirited partygoers, the shop often sells out. The Amherst Survival Center picks up any uneaten slices the next morning.

It’s hard to imagine just how many slices travel from oven to mouth daily. Add Chicken Quesadilla, multiply by Barbecue Chicken Bacon Ranch, and raise to the exponential Dollar Hot Cheese power; whatever the attempt at solving the pizza pie equation, the Antonio’s crew intends on keeping that magic number a secret. Carreiro hesitates when asked about the shop’s daily output.

“A lot [of pies],” he answers and then sighs, “I know, it’s just a closely guarded secret. I can’t divulge that kind of information!”

Service is a big part of any dining experience, no matter how good the food. And that rings especially true at a place as fast-paced as Antonio’s. One set of hands delivers the pizza to the oven, another retrieves and boxes it, and yet another grabs drinks and rings out orders. The line moves unimaginably quickly. Even in that short period of time, the plate-juggling Antonio’s staff makes an impression.

The team behind the counter is relaxed under pressure and most definitely does not shy away from conversation. They get to know their customers: the man in the construction vest, the family of five, or residents from the Ann Whalen senior living apartments on Kellogg Street. For customers, a visit to Antonio’s is like visiting friends— with one hell of a kitchen. 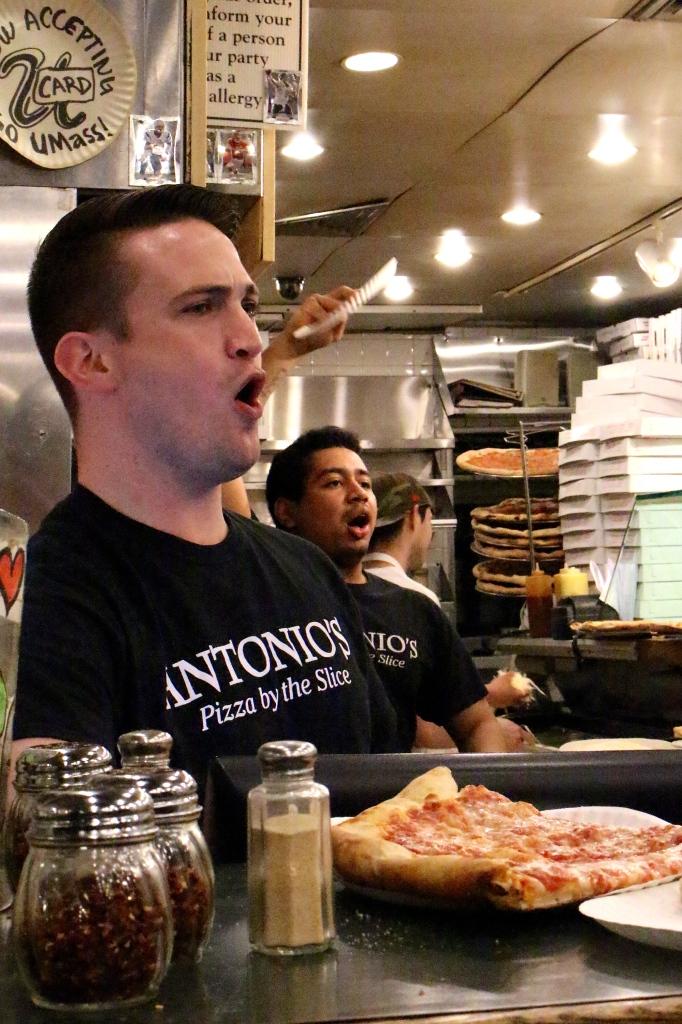 He crosses his arms and closes his eyes, struggling to come up with the word that best describes the Antonio’s staff. From behind the glass, a customer calls out before ordering her lunch slice.

It seems that, when they step behind the counter, members of the Antonio’s family experience the same transformation their customers do when they visit.

“I’m not very articulate,” Carreiro, who recently celebrated his tenth anniversary at Antonio’s, says and smirks. “I’m more articulate when I’m behind the counter.”

The good eats, memorable service, and weekend mayhem took Amherst by storm nearly 24 years ago, when Bruno Matarazzo opened the store to keep busy during retirement. The former owner of Bruno’s, another popular takeout spot at the corner of Main and Triangle streets, named the new pizza shop after his father, Antonio, after selling his name along with his old shop.

“It ended up being this insane place,” Carreiro says of the ever-expanding business, naming its other locations in Belchertown, Easthampton, Pawtucket, Providence, RI, Champagne, IL, and College Station, Texas. The Worcester location is the next on the horizon, set to open this coming fall. Carreiro clarifies rumors of other locations.

“[The opening of] Boston and Lowell? Unknown. But we’re working on them,” he says.

Carreiro’s professional love affair with pizza began in Providence where, after six years of pizza slinging, he was asked to make the move to western Massachusetts. And it seems the Amherst community has made the change worthwhile.

“My favorite part [of the job] is interacting with people,” Carreiro says. “The regulars? We’re like friends.”

Friends, and the inspiration for up-and-coming specialty slices. Carreiro named one slice after daily customer Jackie Bagwell. The “Bagwell” is a slice of Don Giovanni — with fresh mozzarella, avocado, chopped tomatoes, and shaved Asiago cheese — topped with grilled chicken. Carreiro speedily rattles off the slice ingredients.

Bagwell, the Amherst College women’s tennis coach, first bonded with Carreiro over their shared love of tennis. She then forged a connection with the rest of the Amherst location staff over music.

“Much of the staff has some form of a musical background,” Bagwell says, “[And] my daughter is a budding performer. [They] call her ‘Junior.'” And ‘Junior’ is an Antonio’s celebrity, too, regularly enjoying her pepperoni and bacon-topped specialty slice before becoming a vegetarian.

The mailman calls out when he makes his late-morning visit to Antonio’s. The staff erupts in an excited chorus of “¡Hola!” and “¿Cómo estás?” before he hands over a stack of envelopes and says he’ll see them all again tomorrow.