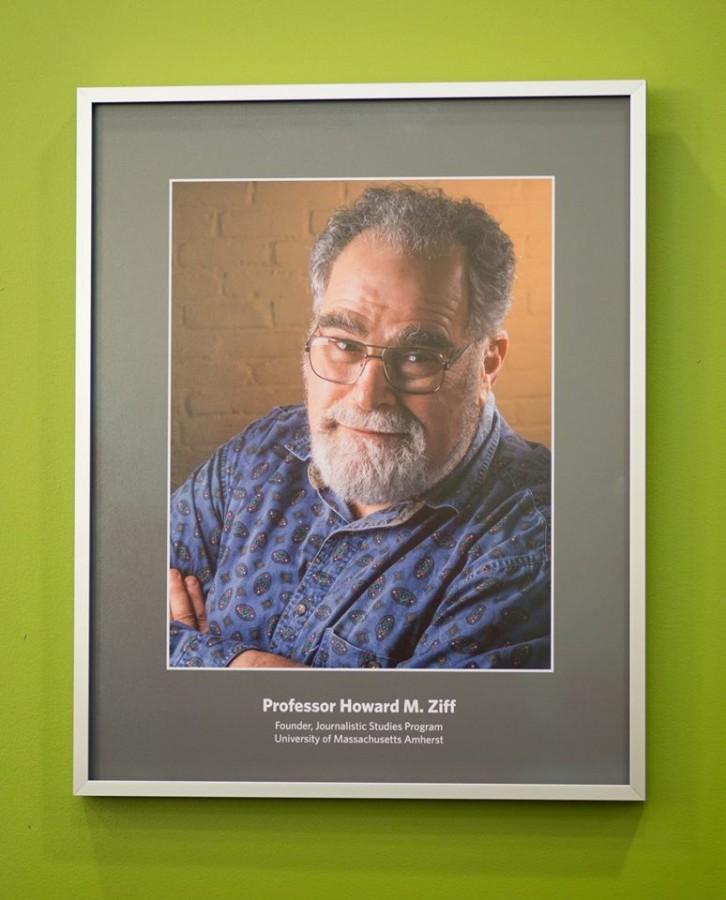 On Saturday, Sept. 26, the University of Massachusetts Amherst Journalism Department hosted the friends of Howard Ziff for a reunion to honor the man who shaped the department in its early days. Students, alumni, and faculty crowded the newly-named Ziff Gallery on the fourth floor of the Integrative Learning Center for tours and a short dedication.

Ziff founded the department in 1971 after working as a newspaper reporter in Chicago for more than 10 years. He served as department chair for 13 years and dedicated his work to bettering the lives of students while teaching them the ins and outs of journalism. Ziff passed away in April 2012 but his memory lives among those who knew him.

Journalism professor Greeley Kyle compiled a short video about Ziff, including photos and interviews with Ziff’s widow Jane and Professor Ralph Whitehead, longtime friend and colleague of Ziff. After the presentation, guests moved to the Amherst Room in the Campus Center for a memorial ceremony, dinner, and drinks.

Master of Ceremonies, Jon Hite, started the celebratory dinner with a toast.

“To the memory of Howard Ziff and the futures that he helped make,” said Hite. Guests echoed his sentiments and held up their glasses as senior lecturer B.J. Roche took the podium.

“[Ziff] would be so proud and happy to see where everyone is with their lives,” she said.  “And,” she added with a smirk, “Howard would have been happy to see that he’s still the center of attention at a great party!”

Larry Carpman, member of the Board of Trustees, spoke next about how honored he was to share his memories of Ziff.  He fondly remembered his old professor, referring to past students as “Ziff’s disciples.” Ziff, he told the guests, cared about his students and followed their careers long after they graduated. He took pride in their craft, he said. According to Carpman, that’s what made Ziff such a special person.

Carpman explained that he wanted to see his old professor one last time in his final days. While Ziff was in hospice care, Carpman visited and spent a good two hours with him. Carpman looked at the nurse in the room and asked her if she thought that Ziff could hear him. She said yes.

“So I touched his shoulder,” said Carpman, “and told him that he enriched the lives of hundreds of students like me, [and] that we were all grateful. We are all better human beings because of the time we had with you,” he recited.

An adjunct professor at Boston University, Carpman urges all of his students to stay in touch with professors whom they feel they have a special bond with, like he did with Ziff.

“The proof of what Howard built at UMass is in this room tonight,” she said, looking at the faces alumni and faculty staring back. “I see Pulitzer-prize winning journalists, entrepreneurs, business owners, public officials, and public servants, all devoted to the public good of education.”

After thanking the entire faculty for their hard work and dedication, Forde handed the microphone back to Hite, who introduced keynote speaker Kevin Cullen. Cullen, award-winning journalist for the Boston Globe, took the podium and brought guests back to 1977, his freshman year at UMass and the first time he met Professor Ziff.

It was the first day of Journalism 101 and Cullen took a seat at the back of the class, listening to a burly, bearded man tell animated stories of the Chicago police.

“He spoke with such enthusiasm and he was waving his hands like a cop directing traffic at an intersection,” Cullen remembered. “I was hanging on every word, like we were going to be told the secret of life.”

“As Howard paced back and forth,” he continued, “it occurred to me that one of his hands was holding a hot dog bun and in the middle of the story, he somehow took a bite of that hot dog and just kept talking.”

At that moment, Cullen explained, Ziff said a word that began with the letter “p,” and as he spoke, a piece of hot dog flew out of his mouth and onto a girl sitting in the front row. Disgusted, she shrieked and ran out of the room. Ziff, unfazed by the event, simply paused for a brief moment and continued speaking.

“It was at that moment, that precise moment, I knew that I wanted to be a newspaper reporter,” he said, generating laughs from the audience.

Cullen said that Ziff taught not only core journalistic skills but, more importantly, he taught that the essence of journalism was telling a good story and representing the powerless.

“The most heroic journalists move toward the people that other people tend to avoid,” said Cullen.

Cullen said that as graduation rapidly approached, he was nervous he wasn’t ready. People at the Daily Collegian, he remembered, had resumes, clips, and experiences. When he relayed his concerns to Ziff he simply said, “I’ll make a call.”

Ziff phoned the editor at the Daily Telegram in Holyoke and said that Cullen was worth hiring. The editor gave Cullen an interview and, later, the job.

“My clips didn’t get me the job,” he said. “Howard got me the job. He vouched for people, for people in this room. And that mattered.”

Guests nodded in appreciation, some seeming to connect their own experiences with Cullen.

Ziff’s lessons and personality were beloved by all who knew him in UMass Journalism, and their thanks will never be enough to show the gratitude that they all feel.