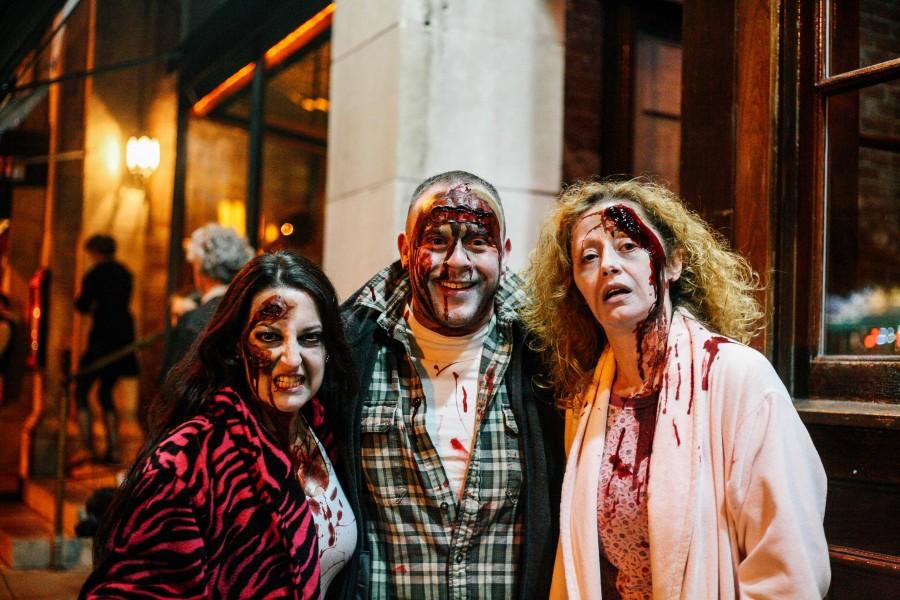 The streets of Northampton resembled the set of Michael Jackson’s “Thriller” on Saturday, Oct. 25. The quirky Western Mass. city hosted the tenth annual Zombie Pub Crawl in anticipation of Halloween this weekend.

Chase, a resident of Holyoke, was zombie Superman. This was his second year participating in the pub crawl.

“It’s fun to participate, and you meet a lot of cool people,” he said.

The first six venues featured in this year’s crawl included Sam’s Pizzeria and Cafe, The Toasted Owl, One Bar & Grill, Ye Ol’ Watering Hole, Hugo’s Cafe and Diva’s Night Club. Participants changed bars every hour, between 6 p.m. and midnight. The night ended at 2 a.m., with zombie karaoke at World War II Club. For Katie of West Springfield, karaoke was the best part of the pub crawl.

Katie was joined by Brittany, fellow zombie Hooter’s waitress, also from West Springfield. Red blood ran out of the open gashes on their necks and trickled down the owls’ faces on their infamous, snug white tank-tops and onto their orange shorts. People watching at the event is a pastime for the pair, who have participated in the crawl for four years.

“This is my first time, however, wearing sneakers,” joked Katie.

Katie and Brittany were joined by fellow Mass. natives, in groups or with newly acquainted zombie friends.

Joe of Greenfield, in an orange jail jumpsuit, was easily picked out of the crowd of zombie costumes. His face — or lack thereof — looked like a cherry pie without the dough. This was Joe’s fifth year as a pub crawl zombie and, for him, the night is an opportunity to include everyone in the community, even those who generally aren’t in a ‘typical’ social setting.

Russ, from Southampton, said he “[blames the phenomenon] on ‘The Walking Dead.'” He participated in the pub crawl for the first time this year as part of a ‘PJ party zombie’ trio, joined by two friends, Allie of Ludlow and Ashlee of Southampton.