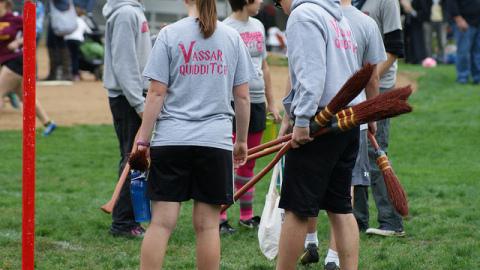 They may play on an old soccer field, but these athletes are playing a completely different ball game, or rather, a Quidditch match. Teams play for the chance to compete in the ultimate honor, The International Quidditch Association’s World Cup.

That’s exactly what the University of Massachusetts Amherst’s Quidditch team, the UMass Crabs, fought for Halloween weekend. Despite going 3-1 on the first day of the Northeast Regional Championship, this dream was crushed, all because of a bad call by the head referee.

“The game was essentially stolen from us,” said chaser Marina Olesen, a Japanese language and literature major.

Inspired by the sport played in the “Harry Potter” series, six players line up on each side of the field to play Quidditch, brooms in between their legs. Three hoops of different heights stand behind them, waiting for balls to be thrown through them for points.

While these players may not be actually flying like in the books and movies, they are running as fast as they can when the referee yells, “Brooms up!”

After the whistle, each team member has a job to do. The keepers (the goalies of the team), fearlessly guard the hoops, stopping opposing chasers (the goalscorers), from scoring with the quaffle (a deflated volleyball) and earning 10 points for their team. Meanwhile, four beaters (the defenders of the team), fight to grab one of the three bludgers (dodgeballs) to hurl at opposing players, sending them back to their own hoops.

For a while, players are solely focused on scoring and defending their hoops. Twenty minutes in, the game introduces a new challenge. A person dressed head to toe in yellow suddenly appears on the field: the golden snitch.

This person may look like a lunatic wreaking havoc on the field, and that’s because they are. The snitch can do whatever he wants because the rules do not apply to him. Catching the snitch and grabbing the ball in the sock that he wears around his waist wins 30 points for the team. But the snitch will pull players off their brooms and stomp all over them before he lets them win. That’s where the seekers come in, also known as the secret weapon; their sole responsibility is to catch the snitch, which ends the game.

According to Captain Thomas Walsh, UMass was projected to go 0-4 and be eliminated on day one of the tournament. This of course, was in reference to a post on the blog, “The Quidditch Post” that called UMass a “less experienced team.”

The Crabs exceeded expectations by making it to day two of the weekend tournament. Their final game against the Rochester Institute of Technology (RIT)’s Dark Marks even kicked off in their favor. UMass was leading 70-30, just out of snitch range, which means we were ahead enough to win the game, even if RIT caught the snitch and won the 30 points.

“I was so proud of the way everyone was playing,” said Walsh. “Arguably two of our best players were injured, so our second-string players had to step up and they played their hearts out.”

Instead of ejecting the player, the referee treated the penalty as if it was the keeper’s first yellow card. According to the official Quidditch rules, the player should have had to sit out of the game for one minute, or until UMass scored. UMass scored in just a few seconds.

“Even though we were supposed to have the advantage, because of this call, RIT had an extra defensive and offensive player on the field,” said Walsh.

The referee did not realize his mistake until after RIT was able to recover the quaffle and send it straight through one of the Crabs’ hoops. According to Walsh, the referee decided that because the keeper did not directly impact that play, the goal would count.

UMass players expressed their disappointment after the call. Most players agreed that it was a huge hit to the team’s morale.

“[The call] completely killed our morale and energy,” said chaser Michael Ferro, a history and kinesiology major. “It changed the entire momentum of the game.”

“It kind of just shut us all down,” said beater Rachel Colonni, a food science major.

Shortly after reaching snitch range, RIT’s seeker caught the snitch, tying the game. UMass lost in overtime, and the team was devastated. The Crabs played one of the best games of their careers, even without two starters.

“They put everything into that game,” said Kelly Kline, a beater and public health and communication disorders major, who was supporting her team from the sidelines.

What’s worse is that the Crabs were so close to proving everyone who didn’t believe in them that they are a viable team. For some, this was a chance to prove that the team could compete against, and triumph over any competitor they face.

“It sucks because we actually could have won that game,” said beater Erin Mathews, a psychology major. “We were so close, even though everyone said we were going to get demolished.”

The loss was especially felt by older players, who were looking forward to enjoying their last year with the team at the World Cup.

Olesen, who has been a part of UMass Quidditch for the past five years said, “It hurts more because we did so well and came so close to qualifying. For a lot of players, including myself, this was our last chance.”

Freshman players were also looking forward to spending their first year on the team at the World Cup, where the upperclassmen had some of their best memories.

Walsh has since made a formal appeal of the game to the U.S. Quidditch directors of gameplay. He hopes to get the game overturned for his team so they have a chance to go to the World Cup.

“I feel we deserve to go to the World Cup because the bad call significantly impacted the outcome of the game,” said Walsh. “It was essentially a huge momentum swing in RIT’s favor.”

Walsh and the Crabs are currently waiting to hear the results of the appeal. Whether or not they are headed to the World Cup is to be determined. Until then, the team plans to carry on as UMass’ most magical sport.