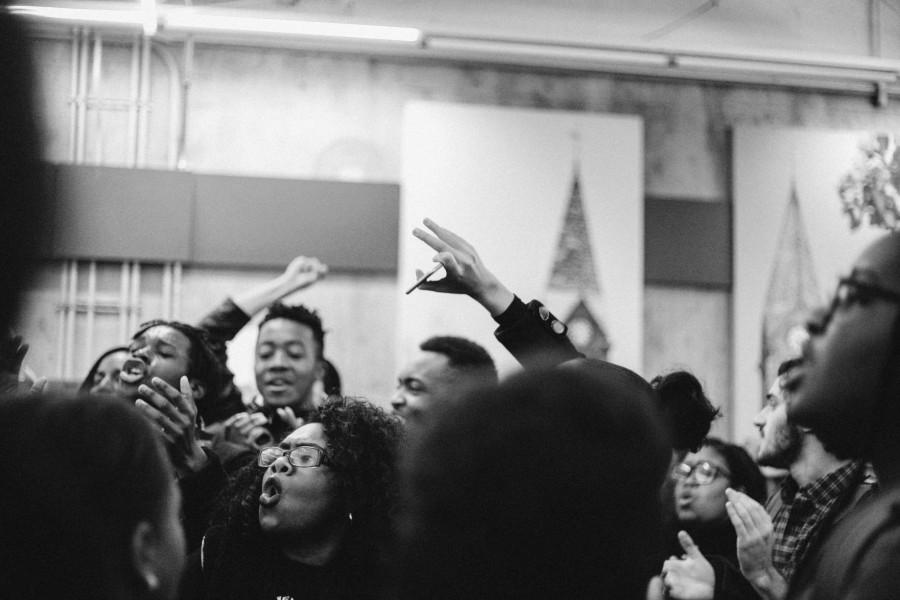 On Wednesday, Nov. 18, students at the University of Massachusetts Amherst gathered in the Commonwealth Honors College (CHC) to protest a lack of diversity on campus and to stand in solidarity with students of color at universities throughout the country.

The national day of action, known as #StudentBlackOut, began when students, dressed in all black, walked out of their classes at 11:45 p.m.

UMass students planned to march to the Whitmore Administration Building, where members of Student Bridges and the Black Student Union (BSU) would demand to talk with Provost Katherine Newman face-to-face about racial injustices on campus.

“We are coming together in solidarity with the students at Mizzou and the students who are dealing every day… with institutional racism, institutional oppression, being marginalized in our own communities, and being oppressed on our campuses,” the sociology major said.

Sheena Jeune, vice president of BSU and double legal studies and political science major, stood next to Hall and spoke briefly about the “listening session” hosted by Chancellor Kumble Subbaswamy this past Friday.

In a post on his Facebook page, the chancellor said the discussion was meant to “address some of our nation’s most enduring and troubling difficulties” amidst racial uprisings at several universities.

“That session was an act to stop us from… coming together and rallying,” Jeune said. “I relay to Subbaswamy that we know that he was saving face.”

The problem, according to Jeune, needs to be actively addressed rather than discussed.

Zareb Noel, a mechanical engineering major, then came forward to share his experiences as a student of color in CHC.

Noel said that last year, just two weeks after moving into Oak Hall, he became the target of racial slurs. The problem though, he said, wasn’t with the n-word itself, but with his peers.

“The group of people around [me] did absolutely nothing to interject themselves into the situation and sort of reprimand the individual for saying those things,” Noel explained.

Hadiya Williams, another CHC student, fell victim to a similar incident when she found “Hadiya is a n*****” written across her door in Birch Hall.

“The problems… are stemming from a lack of diversity,” Williams said. “It shouldn’t be the case where I walk outside and Stephanie is the only sister I see, and Zareb is the only brother I see. When I walk around, I want to see all of these beautiful faces,” she continued, pointing to the students surrounding her.

Williams handed the megaphone to Hardy Jean, a legal studies major and CHC student who lives in the Southwest residential area. Jean spoke about his own experiences with the lack of diversity, focusing on the overwhelming number of black student athletes.

“Why is it that the people scoring touchdowns and dunking basketballs are the only people I see? Where are my black scholars?” Jean asked. “UMass needs more black people, more brown people, more Asian people. UMass needs diversity. Period. You don’t need to be a person of color to realize the lack of diversity,” he continued.

Stacy Tchouanguem, a senior microbiology major and a policy advocacy coordinator for Student Bridges, then signaled the start of the march. Hall chanted beside her,”If we don’t get no justice, you don’t get no peace,” as students headed toward the Learning Commons in the W.E.B. DuBois Library.

After a quick lap, the group marched to Blue Wall and stopped between the rows of tables filled with students.

Tchouanguem and several others stood at the head of the line and asked for protestors to listen.

“I’m tired of seeing more brown and black bodies at Blue Wall than I am in my own classes,” said Tchouanguem. “We are here, standing in solidarity for all the black and brown bodies working for us here at UMass.”

After thanking the dining facility’s workers, students walked to the middle of the Campus Center and back outside.

When the group arrived at Whitmore, Tchouanguem paused at the bottom of the ramp and asked a series of questions: “Does anyone know who our provost is? Does anyone know her name? Did anyone know she was a her?”

Students shouted, “No!” and “Shame!” in response as Tchouanguem shook her head.

“Out of all the listening sessions we’ve had about race at this university, I’ve never seen Provost Newman,” Tchouanguem continued. “I have never seen her face.”

As Hall and Jeune walked into the building to speak with Newman, fellow protestors gathered in a single-file “line of solidarity,” their hands clutching each other’s shoulders. Hall and Jeune quickly returned and said that neither the chancellor nor the provost was on campus.

Susan Pearson, associate chancellor, came out soon after to directly address the crowd. She said that she would happily relay any messages to the officials and try to schedule meetings, but students were not convinced. Tchouanguem asked for a confirmation via email from the provost herself by Friday at 5 p.m., or, she promised, students would come back to Whitmore.

“I don’t mind coming back out here for this again,” Tchouanguem said. “I want another beautiful black woman to come onto this campus and feel safe and feel secured that her education will be valued and taken care of, so we can actually make a change.”

As Pearson walked back into Whitmore, Hall helped students re-organize into a line and asked for complete silence as they followed Pearson up to the chancellor and provost offices.

Vice Chancellor of University Relations John Kennedy approached the group as students demanded to speak to an official.

“We, students of colors and allies feel as though our voices are not heard on this campus,” Tchouanguem said. “We have been fighting for several years. We have the same list of demands since 1969, and nothing has been changed.”

Kennedy said that this issue is a priority, and that he would try to set up a meeting with the chancellor; his suggestion was met with discontent and heavy sighs.

“Meetings do nothing,” said Tchouanguem. “We need action now.”

After working through multiple schedule conflicts, Kennedy and the student leaders eventually agreed to meet with the provost at 12 p.m. this Sunday, Nov. 22, in the Malcolm X Center.

Hopefully, murmured one student, this meeting would finally bring about some change.