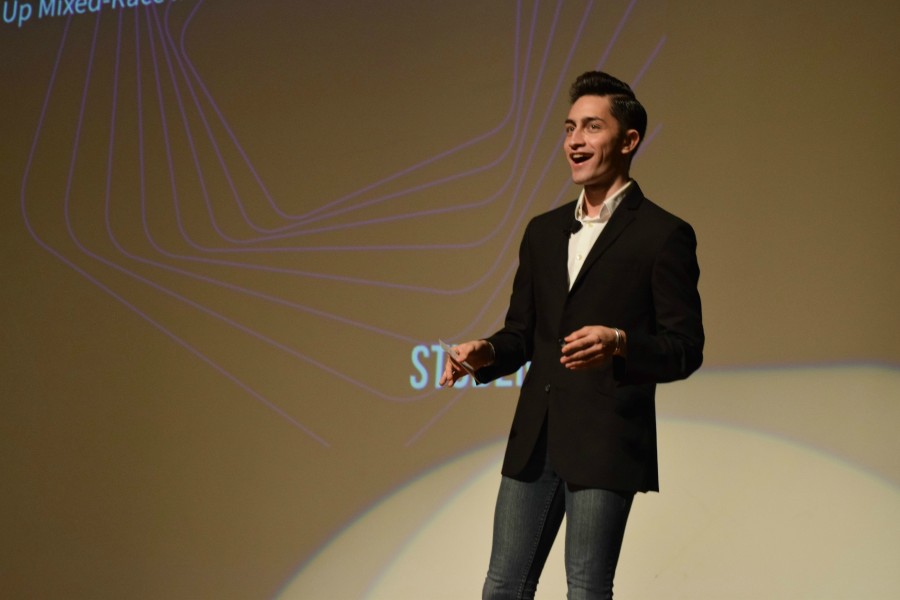 On Thursday, Nov. 19, STUDENTx, a registered student organization on campus, hosted their second annual showcase in the Campus Center auditorium at the University of Massachusetts Amherst. The show featured student speakers and performers from each of the five colleges.

They prepared backstage while ushers dressed in red and black led audience members to their seats.

At the beginning of the show, host Meghna Purkayastha, president of the Student Government Association at Smith College, greeted the crowd and said how excited and honored she was to be there.

According to Elwood, these programs give “the inmate(s) a sense of responsibilities.”

“The unconditional love of a dog gives these people a reason to stay happy, drug free, and crime free, and a new outlook on how their future life outside of prison can be,” she continued.

Kaelan McCone, a freshman at Amherst College, took the stage after Elwood and spoke about the struggles of identifying as bi-racial. After experiencing ignorance and racism while growing up in North Carolina, McCone said he wanted to go to a college that accepted diversity. Upon arriving at Amherst, however, he was disappointed.

He realized that acceptance of diversity is still an issue after repeatedly being asked offensive questions about his race. The solution to this problem, he suggested, is to host discussions about race and identity.

“Who is ultimately responsible for educating people about race and ethnicity and how to have these conversations?” McCone asked. “You.”

The Zumbyes, an A capella group from Amherst College, performed a few songs after McCone.

Liana Weeks, a senior at Smith College, followed after the performance. Her talk, “Youth culture: how it’s defining our generation,” focused on youth subcultures. It was about younger generations creating cultures for themselves, and experiencing the release from societal oppressions.

The goal of these subcultures, she explained, is “communitas,” which she defined as an unstructured community where all people are equal based on a shared experience.

“When communitas hits, you have a full-on confrontation of someone’s socially constructed identity,” said Weeks. “We live in a world that is just misguided by society, and we, as young people have the ability to guide it to the right path.”

Chrissy Dasco, a senior at UMass, was next and performed an original spoken-word poem titled, “Do less, be more.” Dasco spoke out against the injustices within the nation’s education system.

She called attention to the fact that not everyone benefits from schooling, especially when students are tested with multiple choice, fill in the black questions.

“Great products leverage the way people function because they are simply easy to understand. Great products are an intersection of different fields, they blend into your life so fluidly,” explained Dave.

After founding a company called CircuiTricks, Dave realized what made great products, and he said that he ‘s ready to spread these ideas.

When they were finished, Sanah Rizvi, a senior psychology major at UMass, took the stage to talk about “the extraordinary nature of being ordinary.”

According to Rizvi, one-third of all Americans are dissatisfied with their lives, and this is largely due to the fact that humans are constantly comparing one another to those we think are extraordinary, like proteges and young businesspeople. But what’s really amazing, she said, is simply living.

“We live in a world that is so enthralled by this idea of an abstract extraordinary brilliance that we forget to look at ourselves and realize that we are pretty amazing too — you are extraordinary because you are the protagonist of your story,” said Rizvi.

Purkayastha came back on stage for the last time to thank the audience and TEDxAmherst, who assisted STUDENTx with the event.

Interested in attending the TEDxAmherst conference in the spring to hear more stories like these? Learn how to apply here.