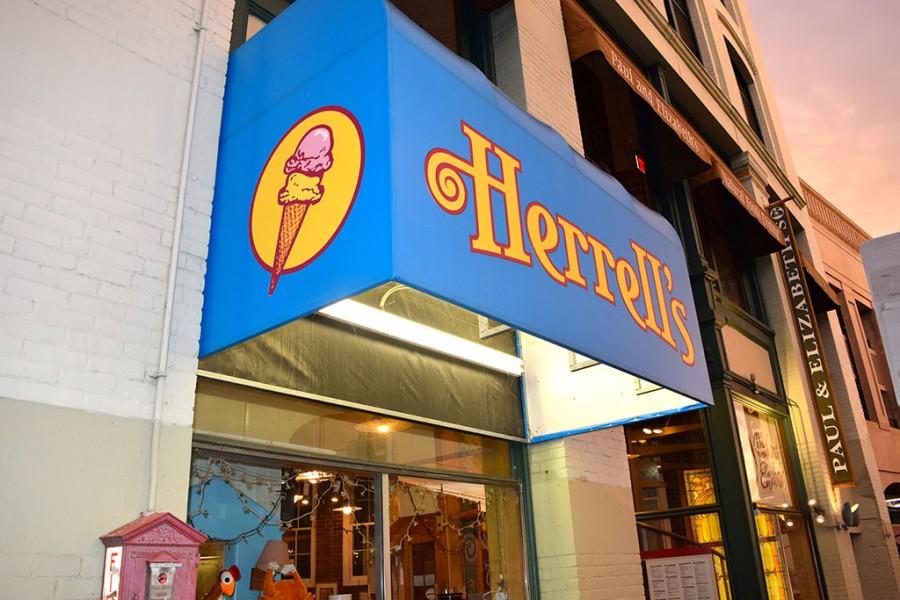 It’s a crisp November afternoon and a long line of customers waits inside Herrell’s Ice Cream shop. A little girl with long blonde hair and a blue and pink striped shirt stands with her father, waiting for her turn to order. Her eyes scan the rows of candy on display. Her father asks her what flavor she wants.

“Chocolate chip!” she shouts. She jumps up and down in front of the counter to get a better view of Michael Burin, 23, as he scoops her ice cream into a small cup.

Her dad looks down and asks if she wants any hot fudge, but she shakes her head and reaches out to grab the cup of ice cream. Burin hands her a spoon and she runs to the nearest table, scooping the chocolate chip ice cream into her mouth as she goes.

Workers run back and forth behind the counter, smiling as they serve the continuous line of customers.

“This isn’t even busy,” said Nadia Kamel, 17, who has worked at Herrell’s for about seven months.

Since Steve Herrell first founded the flagship store in Northampton, Mass. in 1980, there has always been a crowd of people waiting to taste the shop’s handmade ice cream. The store is known for its award-winning hot fudge, unique flavors, and “smoosh-ins,” chunks of cookies and candies mixed in.

Herrell was the first person to incorporate sweets into ice cream, and, according to Judy Herrell, his business partner, it became incredibly popular.

The store will undergo renovations in the next few months. The layout will be switched, the counter will move to the left side of the store and the tables will move to the right, said Judy. A brand new kitchen behind the counter will allow the staff at Herrell’s to make more homemade baked goods. And though the store is “first and foremost ice cream,” the company is looking to expand into a bakery as well.

Though the renovations will change the look of Herrell’s, Judy said that the shop will maintain its “funky, sophisticated and fun kind of feeling.”

“We’re doing some pretty cool things with some of the things we have in here now,” she said. “They’ll still be here, but in a different form. You can still walk in and say, ‘I’ve been coming here for 35 years.’ And you’ll know something is different,” she continued, “but you won’t be able to put a finger on it.”

Rather than using a machine to make all of the flavors the trained ice cream makers at Herrell’s mix in candy and cookies by hand. The job requires what Judy calls “baseball muscles.”

“We’re ejecting [ice cream] into the tub and we literally mix in and spoon in the goodies,” said Judy. “Unlike large manufacturers who pint immediately on ejection, we do it by hand.”

According to Judy, a three-gallon tub of ice cream takes anywhere from eight to 15 minutes to make. However, she adds, some flavors take longer than others, like “Cookie Combustion,” for example. This flavor is chock-full of several different types of cookies, so mixing it all together takes longer.

“It’s labor intensive,” said Judy. “But this way, we can put more of the goodie into the ice cream. If it was done by machine, we would be limited to what we could put in.”

Today, Herrell’s serves over 340 flavors, all made with local and natural ingredients. Some day, said Judy, they’ll have 366, one for each day of the year (including leap day).

Different flavors pop up throughout the course of the year. In March, Herrell’s makes a handful of beer-flavored ice creams in honor of Saint Patrick’s Day, and even offers beer-flavored whipped cream. During Thanksgiving, they offer a special sage-based ice cream with cranberry and nuts.

The invention of new flavors is one of Judy’s favorite parts about working at Herrell’s, because she her background in food science comes in handy. Sometimes, she said, she’ll taste something and think: “Hm, that could be an interesting flavor.” Then she gets to work. Suggestions are always welcome from both her employees and customers.

“If you walk in the office right now, there are bags of roasted chestnuts,” said Judy. “Someone suggested it, and I thought it was interesting and said, ‘Okay, let’s try it!'”

And sometimes, flavors come out of nowhere.

When Steve and Judy’s daughter was eight years old, they took her on a vacation to Nantucket. Upon their arrival at the hotel, the Herrells’ daughter flopped right down on the bed and asked Steve to get some ice cream. When he asked her what kind she wanted, she simply looked at him and said, “Something ooey and gooey.”

Judy said that she and Steve looked at each other “like a light bulb had just switched on in [their] brains.”

When they got back to Herrell’s, the pair made a new flavor and named it Ooey Gooey, a vanilla ice cream with caramel and fudge swirls.

Once a new flavor is made, it’s time for a taste test. Judy said that all the employees try the new ice cream and write down what they like or don’t like on a feedback sheet.

Judy said that, though developing new flavors can be hard, Herrell’s is a great place to work.

When Steve retired, the two went on the early morning television show, “Connecting Point.” They brought with them their jalapeño ice cream, which is simultaneously spicy and cold. The host of the show tried a big scoop of it and could only say, “Wow.”

“She took more [ice cream] to cool off her mouth, but it kept getting hot,” Judy laughed. “It’s spicy, but it cools itself. [The host’s] producer teased her for weeks. It’s just one of those moments in time where you just crack up thinking about it.”

On the other side of the store, a group of eight to 10 people sit at a table in front of three fun-house mirrors, their faces swirling together in the reflection. The middle of the table is cluttered with empty cups and used spoons, evidence of ice cream that once was.