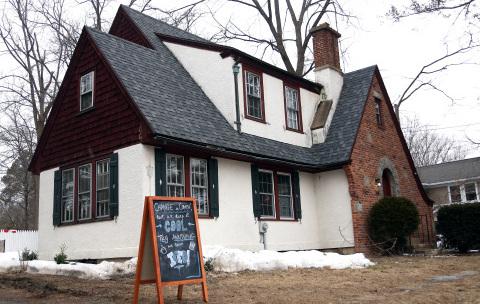 ‘Freedom is not for sale.’

This message is boldly painted on a white picket fence just a few steps from the University of Massachusetts Amherst campus. There, tucked away in the back of the Chi Alpha Christian fellowship house, stands a coffee shop with a cause: the Freedom Café.

General Manager Dan Johnson founded the café in 2012 to make a difference, he said, in the lives of victims affected by human trafficking. There are plans for the Freedom Café to open a second location on campus in 2016. But Johnson had not always planned on running a non-profit business. It was not until he saw the success of an event he hosted that year to bring awareness to the cause, that he realized the contribution he could make. In just one night, he raised $100.

“At the end of the event we realized this needed to be a bigger part of our life, a bigger part of the lives of students on campus, and if we were to do this event everyday, what impact could we make if we could raise $100 a day, instead of a one time event,” Johnson said.

With the support his community, Johnson went on to build a business based around social justice principles, where 100 percent of the donations would go to those in need.

Johnson said the cause itself guides the success of the business every day.

“We raise money to build vocational centers for victims of human trafficking, so people can come in and buy a coffee and literally change lives right now.”

While the café helps many abroad, Johnson said it also serves a purpose here on campus. He said educating the community is another primary goal of the café.

“We can educate people about human trafficking, and even taking it a step further and thinking, what is our role as American people who consume products? What is our role in worldwide slavery?” Johnson said.

Audrey Donahue, a volunteer barista at the café, talked about how her experience there has helped her find a cause she is passionate about.

“I’ve really been able to get behind this cause, and I’ve volunteered over 100 hours over the past two years that I have been involved,” Donahue said.

Donahue and Johnson both said they have become “other-centered people” through working at the café. Living a life for others is the most fulfilling life a person can live, Johnson said.

“We are lucky to have around 90 volunteers this year working at the café,” Johnson said, “but we always have room for more volunteers that want to learn about our cause and get more involved.”

According to the Freedom Café’s website, the non-profit has raised nearly $27,000, which accounts for 10 percent of its target goal to build a new vocational center.