The Victory Theatre: A palace of a playhouse 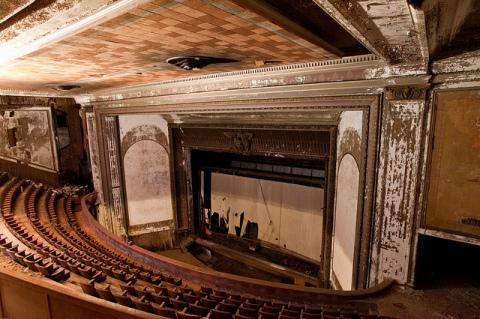 Nestled next to a boarded up hotel and cocktail lounge, the Victory Theatre is almost indistinguishable from any other building on an eerily quiet street in Holyoke. A billboard advertising “Air Conditioning Year Round” sits atop the roof. The building’s blade sign hangs over the boarded-up doorway with a marquee announcing the shows that used to perform on the stage 36 years ago, before the city took possession of the property due to back taxes.

The inside of the theater is warped due to water damage, with rotting walls and broken Rock Maple seats. The white movie screen, last used to show “Every Which Way but Loose,” starring Clint Eastwood, is tattered and torn, still hanging — but barely.

Donald Sanders and his organization, the Massachusetts International Festival of the Arts (MIFA), took ownership of the Victory Theatre in 2008, three years after Sanders began planning his restoration of the once-great masterpiece. Sanders has formal training as a theater director and producer, and was always interested in architecture and how it is used to develop and preserve the communities surrounding the structures. Sanders predicts the Victory will be completed sometime between winter 2017 and spring 2018.

“I compare [the restoration] to if you’re trained to be a brain surgeon, you operate on brains,” said Sanders. “I trained to be a theater director and an empresario, a producer of theater, and performing events. So in order to produce those events, you have to have a place to produce them.”

The Victory Theatre opened on Dec. 30, 1920 as a theater for live vaudeville performance, with a premiere featuring Bert Lytell and “other notable movie stars.” The theater was built next to the Holyoke House, a hotel and bar that moved uptown eight years before the Victory Theatre opened. Sanders explained that before or after the show, people would go to the Holyoke House to drink, and visitors to the city would have a convenient walk to the best entertainment in the city.

For that’s what the Victory was: the best.

“Everything that was done was very perfect,” Sanders said.

In its heyday, the Victory was the conqueror, arguably the most successful theater in Western Massachusetts. With 2,500 seats covered in silk produced by Holyoke’s Skinner Silk Mills, the Victory was a palace of a playhouse, costing $1 million to build. Its proscenium stage configuration brings seats closer to the stage in a fan-shape, giving an unobstructed view from anywhere in the auditorium. But the Victory changed over completely to a movie theater in 1931 when it could no longer stand against the changing media landscape.

Sanders said the theater went through four stages of renovations in its lifetime, though they were more decorative than substantive or structural, mostly changing the look of the interior. In order to properly restore the theater, MIFA has reviewed its entire history to see what it’s been through. One renovation in the 1940s removed the traditional proscenium boxes from the theater, replacing it with tremendous murals that filled two stories worth of wall space.

The Victory Theater was the once-great jewel in the Goldstein Brothers’ entertainment dynasty. The Goldstein Brothers Amusement Company operated theaters all over the Pioneer Valley, including the Calvin Theatre in Northampton, the Garden Theatre in Greenfield, and the Mohawk Theatre in North Adams. But no theater compared to the Victory, named for the Allied Victory in World War I. The brothers called the city of Holyoke home and decided to open their flagship theater there.

At a certain point – Sanders is unsure of the year – the eldest Goldstein brother’s son inherited the family theater chain. He is still alive today, but Sanders has had little to no contact with him because he isn’t interested in the theaters. According to Sanders, when he inherited them, he just let them “drift into dementia.” Sanders pointed out, however, that the son inherited the theaters during a tough time when populations in Western Massachusetts were dwindling, as were ticket sales, making it harder to pay taxes and maintain the upkeep of the facilities.

“He either didn’t have the resources to [run the theaters], or the inclination. Maybe both,” Sanders said.

Over time, the roof began caving in, letting rain into the sacred hall, and though it has been fixed “many times,” other problems still persisted. In order to preserve the exterior architecture, the Victory was built with lead-lined internal drainpipes. When the pipes began to break, the water flowed into the theater, flooding it and damaging everything inside.

Additionally, arsonists started a fire in the basement in 1986, further damaging the theater.

Samples and artifacts from the theater offer a glimpse into the Victory’s history, especially since not many photos were taken of the interior – it was taken for granted, according to Sanders. Many pictures have been taken now, however, while collecting information about the state of the theater. The MIFA office has filled binders, boxes and poster boards with pictures of the present-day Victory’s interior and samples from inside, as well as relics from its glory days: programs, newspaper clippings and various other memorabilia, donated to the MIFA.

The murals that replaced the proscenium boxes are one of the major pieces of the restoration. The pieces of art have been housed in the studio of the artist who will restore them for the MIFA to avoid further water damage. When the Victory is completely restored, it will have 1,600 seats total – 800 on the floor and 800 in the balcony.

To fund the restoration, the MIFA has applied for tax credits, mainly from the Massachusetts Historical Commission, the Federal Historic Tax Credit Program and the New Markets Tax Credit Program. The MIFA has also received donations from companies and individuals. In total, the restoration will cost $28 million, including pre-development evaluations and any overhead the MIFA requires. Sanders said there is only $8 million left to raise.

Sanders said he hopes the restoration will bring life back into the city, especially the downtown. When the Holyoke Mall at Ingleside was built, a lot of downtown businesses moved up to west Holyoke along Westfield Road, leading to the mall.

And when the Victory Theatre once more opens its doors to the public, there may be a special guest, if time allows: Mimi, the daughter of one of the original Goldstein brothers who is close to 90 years old.

“She loved her dad, and she would love to see the theater reopened and going,” Sanders said. “I hope that she will be there the day it’s reopened.”