What do the Minutemen have to say? 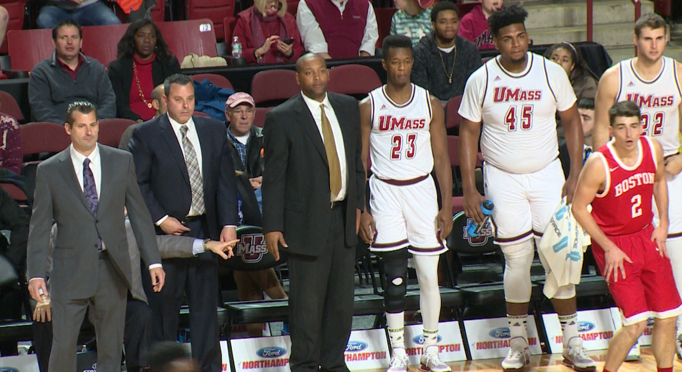 The committee announced back in June of 2015 that the changes would include a 30 second shot clock, moving the arc under the basket from three to four feet, and eliminating the five second call when a player is dribbling.

Timeouts have been slightly adjusted as well. Any timeout that is called within 30 seconds of a media timeout, from the 16:30 mark and on, will automatically become that scheduled break. Teams now have only 15 seconds, instead of 20, to make a substitution.

But with the season well underway and avid fans focused on their respective teams, these small adjustments can often go overlooked.

Why was it time for a change?

Talk of rule changes in NCAA men’s basketball has been in the works for several seasons, but it wasn’t until the 2015 National Invitation Tournament (NIT) that they were given a test run.

Scoring in the 2014-15 season averaged only 67.6 points per game, making it one of the lowest in history. According to the Associated Press and ESPN’s Eamonn Brennan, the organization wanted to change the rules to increase this scoring and speed up play.

And by issuing less time for substitutions, automatically turning timeouts into the media timeouts and implementing a shorter shock clock, these goals can be met.

In terms of the arc, the NCAA decided to move it in what they say is part of a “continued focus” to reduce collisions that happen within the arc. The idea is to force defenders to stand farther away in order to create a legal charge.

What is the impact?

Now that we are in the midst of basketball season, how have these changes impacted the game? Do players and teams see a difference?

For the University of Massachusetts Amherst men’s basketball team, players and head coach Derek Kellogg say it is something that is definitely noticeable.

“The new rule changes were really to try to increase the offensive output of teams and I’m thinking the thirty second shot clock obviously will give a few more possessions each half and should increase scoring,” Kellogg said.

One of the initial impacts Kellogg and his team have seen is the change in defensive structure. “We’ve seen a lot more zone from teams and kind of slowed down zones, where they are picking up full court to slow you down so you have less time against the shot clock. We’ve seen a few more rushed shots late in the shot clock,” Kellogg said.

Kellogg supports the changes by reporting that teams are playing faster, coming up the court quicker and creating a more high-scoring game, something he says fans want to see.

Forward Seth Berger noted that these changes have made a difference in the speed of play, but he says this is something the Minutemen are used to. “I think as a team, we haven’t really noticed it much because we play sort of a fast style of play and we get a lot of shots up, a lot of possessions,” Berger said.

Forward Zach Coleman says it was normal to apply pressure to certain teams before, but now this has become more difficult because some teams hold the ball as their way of defending.

Coleman admits he’s already seen how these changes have made a difference and that, at times, it can get confusing. In the Minutemen’s first game of the season against Howard University on Nov. 14, Coleman says he was confused on a particular call.

“I remember the guy picked up the ball at half court and he just couldn’t get it to anybody and they called a five-second call,” he said. “And I was confused, I initially thought the ref made a mistake because I knew that there was no more five-second call.”

“But it actually — that’s when I learned the rule — that it’s actually when a player picks up the ball and they aren’t making a move or doing anything in which the five-second rule still applies,” he added.

This is all part of the process and adjustments that come along with the changes.

Kellogg specifically finds this rule ironic because he has become accustomed to all the different styles as both a player and as a coach. When Kellogg played basketball for UMass, there was no five-second call. As a coach, he’s seen the rule come into action and now return to where it was before. Personally, he wishes that the call was still in place because he says his team likes to pressure the ball. However, he thinks the rule changes have been good for college basketball and this change in particular gives guards more time to run their offense and get their team into play. 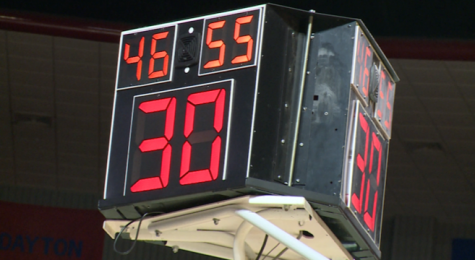 Looking at the 2015-16 changes, it’s hard to recall that the game of basketball did not always include all of these elements. There was a time when there was no shot clock and no 3-point line in college basketball. The clock itself was implemented after the NCAA tournament was expanded in 1985.

The five-second decrease is the first time changes have been made to the shot clock since the 1993-94 season, when it was changed from 45 to 35 seconds.

While five seconds might not seem like a big difference, the 30-second shot clock is actually one of the most prevalent and noticeable changes this season. The shorter time on the shot clock forces teams to do everything quicker, which is something that Coleman says is always consciously on his mind.

The sociology major pointed out that once he gets down to a half court set, that’s when he realizes how the 30-second shot clock impacts the pace of play. “By the time you’re set up, instead of having 15 seconds, you only have 10,” he said.

As a coach, Kellogg likes the shorter shock clock.

“I thought anywhere from 25 to 30 seconds, or 28 to 30 seconds, would be good for college basketball. At times as a coach you’re watching a game on television, you’d see teams move the ball from one side to the other and screen to defense before they actually would go to make a play. It was kind of like wearing the defense down and making moves so I think this does make you incorporate your offense a little quicker,” Kellogg said.

And Kellogg believes out of all the rule changes, the shorter shock clock is the one most coaches have adapted to this season and are using to their advantage and benefit.

It will take time and a collection of statistics once this season is over to see if the shot clock makes a difference in shots and shot attempts.

Arc under the basket 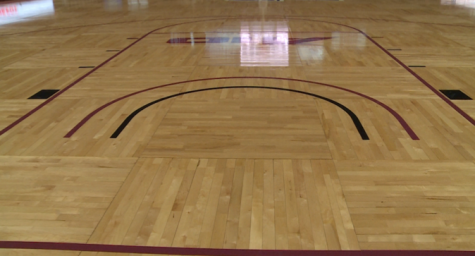 Moving the arc out a foot is something that the NCAA hopes will reduce collisions by giving players more room. But UMass players do not seem to notice a significant difference.

“I feel like there’s still a lot of banging going on inside,” Coleman said, “so I don’t know what collisions they’re trying to reduce.”

Berger added that the only time he has noticed the difference is in practice when coaches will simulate charge calls and they will work through whether their feet were on the line or in the box.

The future of college basketball: Should it look more like the NBA?

Looking at the bigger picture, is college basketball going to become more like the NBA? Should the game make even more changes to prepare those players who hope to go to the professional level more prepared?

Breaking it down, there are a lot of differences between the college level and NBA. Collegiate basketball plays two 20-minute halves, while the NBA and the International Basketball Federation (FIBA) play four 12-minute quarters. The shot clock in professional basketball is only 24 seconds.

Both Coleman and Berger believe the college game should move toward the direction of the NBA.

“Why not prepare players for what they want to go to?” Berger said. “It’s nothing that’s hindering the game in any way it’s just making it faster. And that’s what people want to see.”

Coach Kellogg agrees that there are a lot of advantages to following the way the NBA is played. He says that small, subtle changes like the arc moving back are beneficial, but that changing the shot clock to 24 seconds might be too fast for the college game.

Kellogg mentioned that what differs the most between the two levels is that the NBA teams often have special players who are quick hitters and can make plays on their own. “I’m not sure we’re ready to go the full NBA model just because of talent differential,” he said.