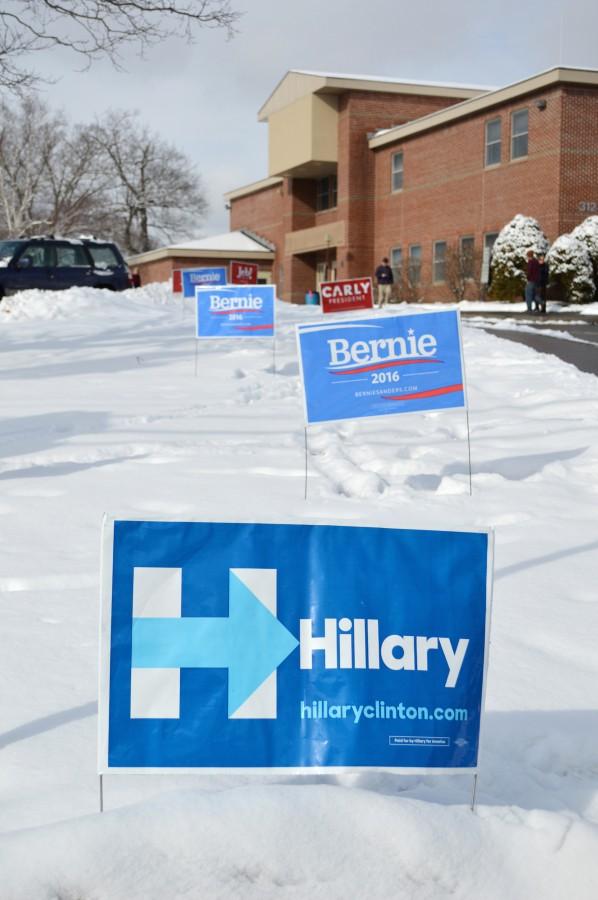 Signs outside the Parks and Recreation Department in Keene, NH, one of the city’s five voting precincts.

Before you cast your votes in the upcoming presidential primary, consider which candidate has your best interest in mind.

By enrolling in college, you’ve made a smart investment. Today, a college degree holds more significance than in years past. College graduates earn $1 million more than high school graduates throughout their lifetime — so your degree may be your ticket to a high-paying job. However, it only takes a glance at your astronomical bursar bill to discourage this thinking; with student loan debt reaching $1.2 trillion, your future looks grim. You need someone who can ease your financial burden as you transition from college to the adult world.

Clinton calls her plan “The College Compact” — compact, as in a formal agreement between two or more parties. Her plan ensures a debt-free tuition, but only if everybody plays their part. First, the plan provides grants to states that “ensure no student graduates with debt.” This means that in exchange for the grants, states must increase funding to higher education. It also means that colleges would have to limit non-tuition expenses. Essentially, the Compact steals autonomy from states and colleges, and gives all that power to the federal government.

They probably won’t give it up quietly.

Clinton also expects families to make a “realistic” contribution based on what they can afford. This certainly makes sense. Only, college students across the country fill out the Free Application for Federal Student Aid (FAFSA) every year. They provide details about their family’s income and then determine how much aid they’re eligible for. That being said, it’s not clear how this differs from our current financial aid system.

Sanders, the idealist, keeps his plan simple. He calls it the “College for All Act” — all, as in everybody. His plan eliminates undergraduate tuition at public colleges and universities. Sounds promising right? Well, critics say that this is unlikely, and they’re probably right. Technically speaking, college wouldn’t be free. Rather, the cost would just shift from the student to the taxpayer. And Sanders’s idea costs a whopping $70 billion. He intends to impose a “Robin Hood Tax” on Wall Street, which he says will fully pay the cost. Again, he’s an idealist.

If the men in suits pass that one, I’ll be shocked.

We also must question: does free tuition mean better education? Sanders said in his New Hampshire victory speech that we need free tuition to create the “best-educated workforce.” Actually, the top three most college-educated countries charge tuition, so this argument lacks credibility.

Likewise, free tuition comes with concern that students will slack off without college cost as an incentive. Even with tuition costs in place, college students skip classes. That being said, it makes sense that students might put in a little effort for a degree worth $1 million. But does the effort have to be monetary? Colleges students were accepted to college because they studied hard in high school. And they don’t just get the degree by paying — they actually have to pass classes.

The winner? Clinton’s plan wins on practicality. However, her plan requires major revision to win over Republican politicians. Sanders’s idea may be a stretch, but at least his ideas are new. He understands that any student who studies and succeeds should get the education they need, without the burden of costs.

Another part of Clinton’s compact requires students to contribute earnings from working 10 hours per week. Idealistically, this would develop a student’s work ethic, and that’s a positive thing. However, Clinton doesn’t consider that college means more than just classes. College means hours of homework outside of class; it means extracurricular activities and (unpaid) internships to build your resume; maintaining a social life and networking. As a result, students struggle to fit part-time jobs into their busy schedules.

Sanders’s plan has the flexibility that Clinton’s lacks. The College for All Act triples the federal work study program to meet the financial needs of low-income students. This way, students still have ample opportunity to build career experience, without the added pressure.

The winner? If Sanders could acquire the funds, he wins this one. Providing students with opportunity over pressure seems like a fair deal.

Though the candidates disagree on much of the issues, they agree when it comes to tackling student loan debt. Your degree may be with $1 million over your lifetime, but loans need to be paid back sooner. With the burden of debt, millennials must push off homeownership until they can afford it. Odds are, you’ll live with your parents a lot longer than you planned. And studies show that student debt could have a more long-term effect because it threatens retirement.

Both plans promise to cut interest rates on student loans in half. Likewise, people already affected by student debt can refinance their loans at lower rates. Though, the fact that they address future student loans means that neither of their plans are as good as they seem. Clinton’s is not debt-free, and Sanders’s is not totally cost-free.

The winner? We have to deal with the fact that nothing is actually free.

In the end, each plan has its flaws and neither seems likely to pass in full. Ultimately, it comes down to which candidate is more committed to reducing student debt.

When you cast your votes on Tuesday, vote with your wallet.