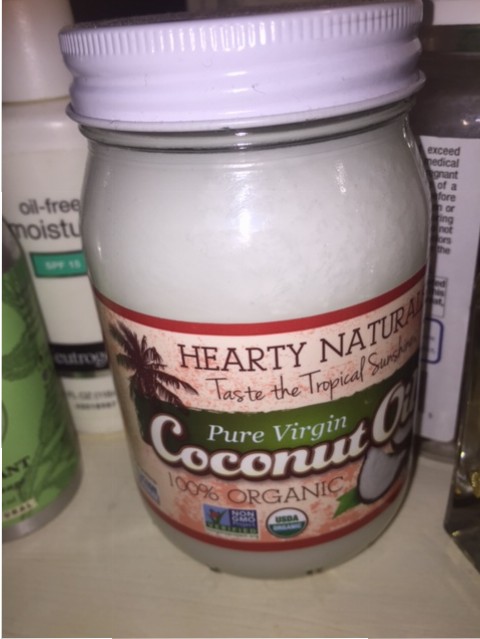 Coconut oil (a.k.a the Beyoncé of all oils) is always in the news for its hundreds of various purported health benefits. What does it do, you may ask? Well, the better question is, what doesn’t it do?

In search of an answer, I decided to do a little experimenting and found that, in most cases, coconut oil really is worth all the hype.

I melted three tablespoons of coconut oil in a pan and slathered it onto every last strand of hair on my head, section by section. Then, I tied my hair into a bun, wrapped it in Saran wrap and let it sit for two hours.

WARNING: Do this on a day when you don’t plan on leaving the house or seeing anyone. It took me two showers (six thorough shampoos in total) to get all of the oil all out. But, despite all of the extra shower time, I would definitely apply this deep conditioning treatment again. Not only does the oil leave your hair smooth and shiny, but also after a few applications, it will help your hair grow longer and stronger.

Try rubbing some of the oil on your cuticles for a similar effect on nail growth.

After getting out of what felt like a seven hour shower, I tried coconut oil in place of body lotion. This was probably my favorite use of the oil overall. Once I got past the thought of rubbing this strange and pungent substance all over my body, I realized the oil moisturized without leaving the oily residue that I’d expected.

The next morning, I was feeling pretty brave and tried “oil pulling,” a trend that’s been around for ages but is just now in the spotlight. Oil pulling calls for melting a tablespoon of coconut oil and swishing it around your mouth for 20 minutes (yes, that’s right, minutes not seconds). The purpose of this “pulling” treatment is to remove the toxins that, after being expelled from your body while you sleep, end up in your mouth when you wake up. Oil pulling removes the toxins while also whitening your teeth, freshening your breath, preventing cavities, stopping headaches, curing hangovers and improving your oral and overall health. While it’s definitely not the most pleasant experience, this treatment is actually not as awful as it sounds. Your mouth will get tired and you may gag or spit the oil out early, but fighting through the discomfort and doing this every day for a few weeks could work some serious magic.

When it comes to actual consumption, coconut oil has previously been shunned for its 90 percent saturated fat content. However, this kind of saturated fat, lauric acid, does not have the same detrimental long-term effects as the saturated fat found in meat and dairy products. When incorporated into your diet, coconut oil provides a source of energy that is not stored as fat, which lowers your cholesterol and reduces your risk of heart disease. For those trying to lose a few pounds, this oil boosts your metabolism and suppresses appetite as well.

Replacing the butter and oils in your diet with coconut oil is very beneficial and easy — if you like the flavor. I recommend this substitute for baking, browning vegetables, spreading on toast and melting over popcorn; you can even add it to your morning tea — any way to get your daily dose in. Tom Brady’s chef made a statement that he only prepares the star football player’s meals using coconut oil. If you weren’t a believer before, I bet you’re ready to run to the store now.

Other than its satisfactory use as a body moisturizer, coconut oil proved merely decent as a substitute for other products.

Rubbing the oil on my eyes as a makeup remover and under my arms as a deodorant pretty much gets the job done, but I found I much prefer my name-brand products. Coconut oil can be a good shaving cream, though I find it easier to just use the soap that’s already in my shower. Some recommend using the oil as a lip balm, but I liken this to rubbing grease on my lips, grease that dries before it can actually moisturize.

Some of the suggested uses for coconut oil work wonders, while others seem to have been added to the list just to make it longer. But, even if it isn’t the solution to all of your beauty and health problems, it is totally worth some experimentation.