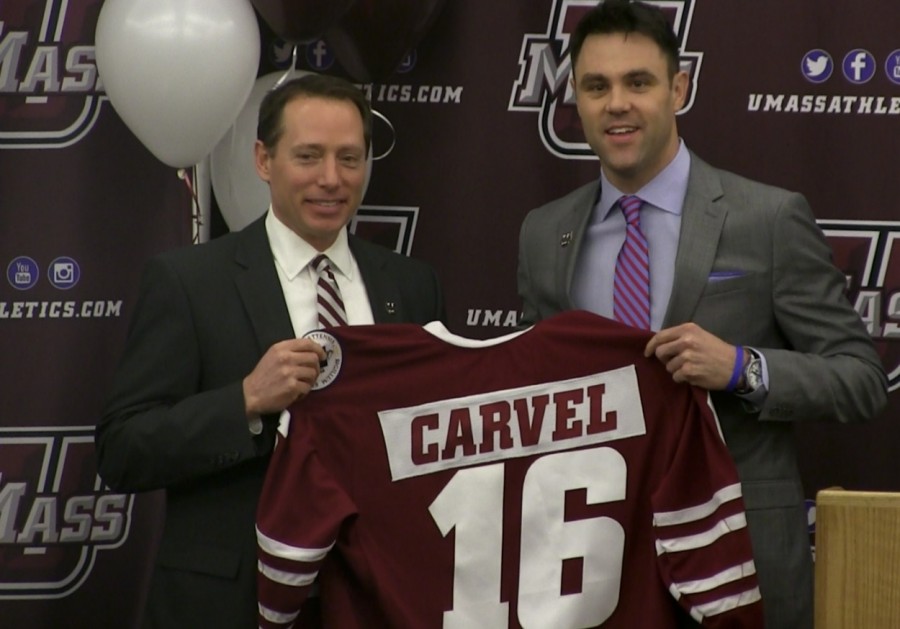 At the end of the 2015-2016 hockey season, the Minutemen finished with an overall record of 8-24-2. When they came in last place in the Hockey East Conference, UMass athletic director Ryan Bamford knew that it was time for a change.

A statement released on March 6, 2016 announced that Bamford relieved former head coach John Micheletto of his position, which he held for the past four years.

“As a part of that search and process, I found out that we needed a leader,” Bamford said during the conference. “Someone who could be a role model for our young men, a hard worker, a strategist, a communicator and a coach who could be a good teammate in our department.”

Carvel grew up in Canton, N.Y. and spent his undergraduate career at St. Lawrence University, where he played hockey for four years. As a senior, Carvel was captain of his team and by the time he graduated, he was ranked ninth on the Saint’s career assist list.

Carvel earned his master’s degree in sports management from UMass and then started his professional coaching career as the director of hockey operations for the Lowell Lock Monsters.

After that, he went on to work with the Anaheim Ducks, starting as a scouting coordinator and working his way up to assistant coach in 2003. A year later, Carvel took an assistant coaching position with the Ottawa Senators until 2011. He went with both the Ducks and the Senators to the Stanley Cup Finals before accepting a job as head coach at his alma mater.

According to Carvel, he is never afraid of a challenge when it comes to hockey.

While head coach of the Saints, Carvel worked to improve the team and create a stronger hockey program.

“We took a team that was at the bottom of the league, and in three years, we pushed them to the top,” he said.

According to Bamford, this is what he was looking for in picking a replacement for Micheletto.

“[Carvel] is extremely well prepared. His team plays hard, they are focused, and they have a great sense of pride,” said Bamford. “He is tough, but fair, and he will develop a program, not just good teams.”

Carvel said that he not only believes in the importance of being a good coach to players, but also being a good role model.

“This is the best four years of [the players’] lives, and they need to have a coach who recognizes that and who wants to be an important part of that and experience that,” said Carvel.

Both Carvel and Bamford are ready to see the team turn over a new leaf and rise up in the Hockey East.

Bamford described Carvel as a “genuine human being” which is something that “really resonated” with Bamford when it came to selecting Carvel as the new head coach.

“I’ve got to get my family settled, and I really have to get a lay of the land,” he said.

That being said, he is excited to start working with the Minutemen and eager to get started.

“This is my next challenge and I cannot wait to jump into it,” said Carvel.

Allie can be reached at [email protected]