Top Five: Ways to reduce your carbon footprint on campus

How can you help in the fight against climate change? 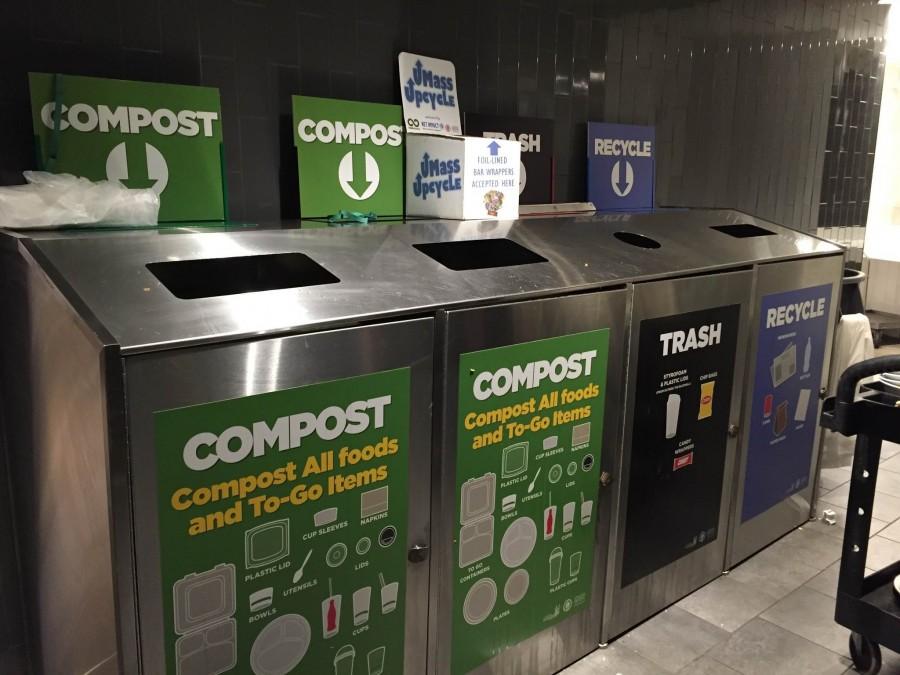 With dire stories about climate change in the media, it’s easy to feel hopeless, to feel like you can’t fix the problem. But the truth is, everyone can take steps to reduce energy use and waste, and save the planet.

Simple changes to our everyday habits can reduce the amount of carbon dioxide we produce. Consider these methods to reduce your carbon footprint this Earth Day.

Many college students keep TVs and microwaves in their dorm rooms, and those who live off campus might even have a coffee maker, toaster, and a washer and dryer.

Between homework, classes and weekend plans, it might feel like a hassle to unplug appliances and chargers, but electricity flows through these devices as long as they’re plugged in — even when turned off. It’s called “vampire energy,” and accounts for as much as 10 percent of electricity use, according to UMass Eco-Rep facilitator Derek Bossi, a biology major at the university.

So why waste it?

It only takes a second to unplug your devices and avoid unnecessary waste. If you have a lot of devices, invest in a smart power strip. These strips have a switch that automatically cuts power to all devices plugged in. Plus, think about the money you’ll save on electricity.

Think twice before stopping at one of UMass’s convenient stores for a $1.50 bottle of water — you can get the same quality water for free from a sink or water fountain.

Bossi explained that plastic water bottles create a lot of waste. Only 20 percent of plastic bottles get recycled, leaving the rest to landfills. He attributes this problem to a lack of knowledge about where to recycle and the lack of recycling bins available in public spaces. He refills his reusable Camelbak water bottle two to three times per day, he said.

“I drink a lot of water,” Bossi said. “If I was drinking plastic bottles, which only have one use, I’d create a tremendous amount of waste in just a semester.”

You can purchase a Camelbak water bottle for $15 at Walmart or Target. UMass also sells them at the campus store for as low as $6.

And after a rough day, a long, hot shower sounds tempting. It’s therapeutic, with the steam around you and water raining down on your head; showering can recharge you. But it doesn’t need to take more than 10 minutes.

Sustainable UMass suggests limiting showers to five minutes, though the Eco-Reps in Bossi’s class explained this can be difficult. During one of their weekly behavioral changes, they struggled to get their shower times down. Freshman psychology major Hannah McNeill explained her long hair takes more time to clean, but she found a solution.

“I shut off the water when I shampoo,” she said. “I don’t need the water until I rinse, anyway.”

Recycling and composting reduce the amount of waste we produce. Any student who has been to Blue Wall has seen the labeled waste bins. The labels and pictures make understanding where to throw your trash out much easier, but not all of the bins are like this.

In 2012, UMass introduced single stream recycling. Whether you have paper, plastic, or aluminum, you can put all recyclables in the bins labeled “All-In-One-Bin.” Before you recycle, make sure everything’s clean. Contamination, such as food residue, liquids, or dirt can cause problems at the sorting plant. Rinse out beverage bottles and yogurt before recycling, and leave dirty pizza boxes in the trash.

So where do you put your compost? At the moment, dorms don’t have compost bins, but you can find them at campus dining locations. If the bins aren’t labeled, look out for green trash bags intended for compost.

Cut back on meat

On your way to class, you’re likely to run into a Baby Berk food truck, and your mouth will water at the thought of a juicy burger. But try to consider the environmental impact the next time you order one.

Bossi explained that one pound of beef takes 2,500 gallons of water to produce. In addition, transporting meat from farms to grocery stores releases fossil fuels into the air.

“You don’t have to go vegetarian or vegan,” said Bossi. “One meatless meal a week makes a huge difference.”

Matt Noke, a biochemistry major, shared a statistic he learned in his Eco-Rep class: one gallon of gas burns about 20 pounds of carbon dioxide. Think about a grocery trip to the Big Y on University Drive; if 10 students take one bus instead of each taking their cars, they’ll reduce 20 times the carbon dioxide emissions.

“I would say riding a bike or a bus instead of driving a car is the single most impactful thing a student can do,” said sustainability manager Ezra Small. “It has a high emission reduction.”

The Pioneer Valley Transit Authority (PVTA) provides free public transportation in the Five College Area. The buses drive students across campus, downtown Amherst, the stores in Hadley and Northampton. Why not take advantage of the free transportation?

UMass also has a bike share program. To rent a bike for 24 hours, bring your UCard to the Student Government Office, located in room 420 of the Student Union. It’s free and comes with a helmet and bike lock.

Try these easy methods today, and see if you can keep these habits going after Earth Day is over.