The Green Party presidential candidate came to talk about divestment and her future plans. 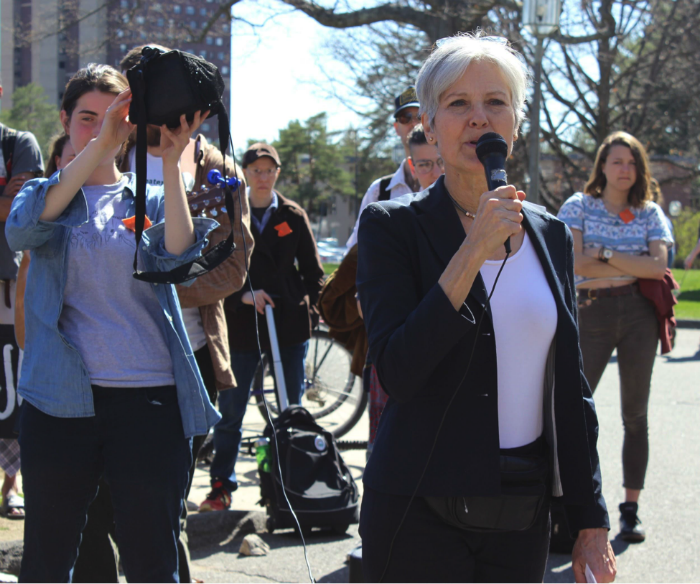 In 2002 the Green Rainbow Party in Massachusetts recruited Stein to run for governor. She considered herself an activist and never thought of going into politics before.

“I always put off mainstream politics, to tell you the truth, because it was always corrupt. [It] always seemed, you know, like there was just so much money involved,” Stein said. “It always seemed like politicians were trying to get something out of you.”

But after Stein ran in 2002, she felt empowered by the support and energy of the community centered around her movement, and the potential of what it could mean to restore democracy.

“It was so exciting to see that there was just a different way to do this and, as an activist and a community organizer, I saw that all of our efforts were being beaten back. So I said, ‘Well, might as well try running for office because everything else has failed,'” she continued.

Stein visited campus amid the UMass Fossil Fuel Divestment Campaign’s recent efforts to push the university to fully divest from fossil fuels. For almost two weeks, the group has organized sit-ins and protests both in and outside of the Whitmore Administrating building, calling on administration to join the divest movement.

“This,” said Stein, referring to the efforts, “is what democracy looks like.”

Stein congratulated the campaign for their work toward climate justice and spoke about her proposed plan for presidency, which focuses on a green economy. She believes that for the planet’s future, the United States must fully divest from fossil fuels that pollute both the atmosphere and water.

“We don’t have a choice; we need to [divest] and the sooner, the better,” she said.

During the rally, Stein urged students to turn to independent politics and critiqued the Democratic Party for being a corrupt system that sabotages well-intentioned politicians, like Bernie Sanders, she said.

“While the Democratic Party has allowed these progressive candidates to stand up and articulate a progressive message, that party keeps moving toward the right as money gets more and more concentred and, you know, over the cliff we go,” she said.

Stein’s proposal plan calls for a “Green New Deal,” drawing from Franklin D. Roosevelt’s New Deal in the 1930s, which bought citizens and the economy out of the Great Depression. The deal will transform food systems, public transportation systems and conservation by creating over two million jobs and move the United States toward 100 percent renewable energy by 2030.

In order to fund the Green New Deal, according to Stein, the government will downsize the military to free up money. By moving toward a green economy, people will be healthier due to less pollution and toxins in the atmosphere, which will then reduce the amount of money spent on healthcare. All of this, she said, will make more money for the energy transition.

Though in 2012 Stein only won 0.36 percent of the election with 456,169 votes, her campaign this year shows her focus on remaining an alternative to mainstream politics.

“We need to work as a social movement together with political voice as well, because looking back over history, that’s where transformational change happens,” she said.

Carson can be reached at [email protected]