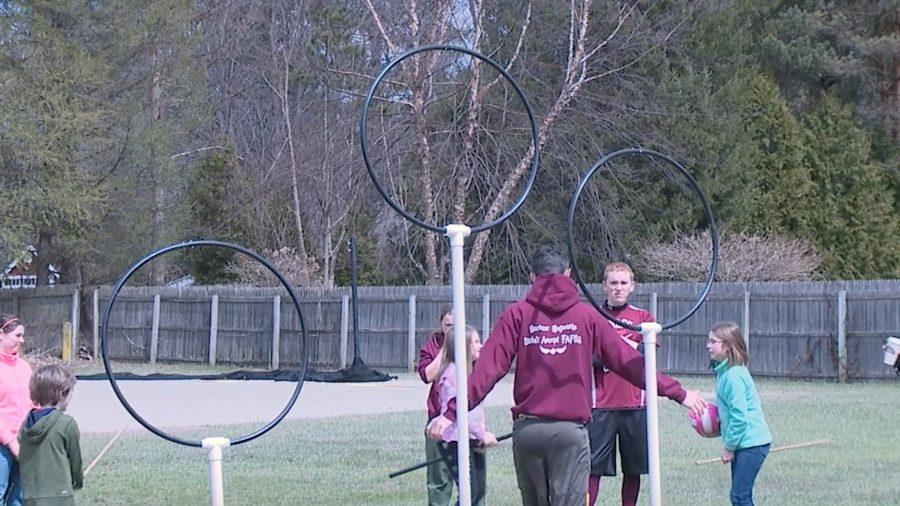 Beaters, Chasers, Seekers, Keepers and the Golden Snitch make up a full Quidditch team. If these names sound like they came straight from a fantasy novel, you’re right. The game of Quidditch originated from the Harry Potter series, written by J.K. Rowling. The game adapted into the “muggle” (human) world and found a home on the University of Massachusetts Amherst campus.

At UMass, campus organizations must commit to community service throughout the semester. This year, the Quidditch team decided to give back to the Sunderland Library.

The chilly Saturday afternoon started with 25 children in robes and sneakers, ready to play the game they grew up reading about and watching in the Harry Potter movies. Phrases like, “I want to be Hermione!” and “I would never want to be a Slytherin!” were yelled in high-pitched voices. Ferro and his team herded the children into a circle and started to explain the game.

Sophomore Quidditch player Kelly Cline said, “In high school, I would babysit and work at summer camps so when I heard we were going to be teaching kids how to play something I love, of course I would be coming.”

Parents watched their children pass, run and throw the balls through the three hoops on each side of the field.

“They had a great time and we had a blast. It’s awesome we could give back to the community and have a fun time while doing it,” said Ferro.

The first time Quidditch was played at a university was in 2005 at Middlebury College; there, the International Quidditch Association (IQA) was born. Now students at more than 400+ universities around the country run around with brooms between their legs to play this magical game. After the influx of college participation, the association changed into the U.S Quidditch Association.

UMass started its own Quidditch team in the spring of 2008.

Michael Ferro, the president of UMass Quidditch, said that although a lot of players drop out, the team is left with dedicated students that love the game.

“We started off the semester with about 50 kids coming out to play, but as the semester goes on, people leave or decide they don’t want to play,” Ferro said. “We have enough people where we are able to play scrimmage games at practices [seven per team], and travel to different schools on the weekends.”