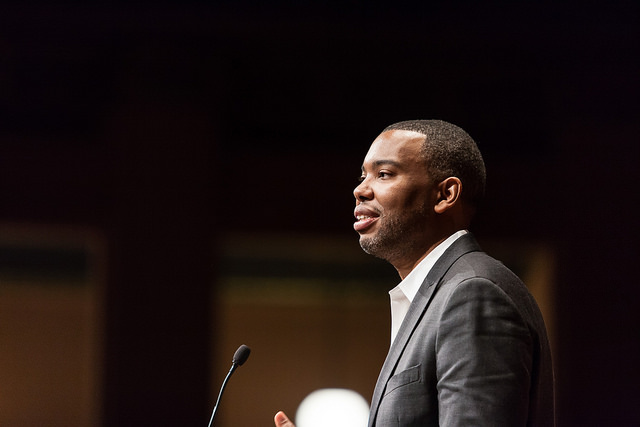 The conversation, which began at 6:30 p.m., encompassed the work Coates does to address issues people of color encounter nationwide, including police brutality and systemic racism.

“I would love to talk about racism instead of race,” Coates said. “Race and racism are two different things.  We think of race as a permanent thing, but different places and different times in history see different races.  (Racism) is always derived from the actual action.”

A correspondent for The Atlantic, Coates has written a series of articles about race in America. In 2014, Coates wrote “The Case for Reparations,” where he discusses making amends to those who have suffered from housing segregation and financial distress since the era of slave ownership.

“He writes directly and unapologetically about racism, and he does so in personal terms,” said Carolyn Martin, president of Amherst College.

According to Martin, Coates has addressed racism in “every medium of expression” including print, television and graphic arts.

Coates’s latest book, “Between the World and Me,” takes a personal approach to problems among the races in modern America. The book won a National Book Award in 2015 and was nominated for a Pulitzer Prize in 2016. It is written from the point of view of a father speaking to his son. Coates expresses his concerns about releasing a black son into a world where he believes the black body is mistreated.

During the talk, Coates mentioned a number of people of color who died at the hands of police. Those deaths have ignited controversy across the country and tension between the black community and the criminal justice system.

Coates spoke about Sandra Bland, a black woman who died in a Texas jail cell in July 2015.  Coates described Bland as “a woman who was threatened to be lit up by a police officer and then found dead in jail, and no one knew what happened to her.”

Eric Garner, also mentioned by Coates, was choked to death by police after selling loose cigarettes in New York a year before Bland’s encounter with the police.

In light of these instances, Coates suggested changing the language of the conversation.

“We live in a ‘no excuses’ culture today,” Coates said.  “Slavery was a mistake; Jim Crow was a mistake.  So the idea is anything that is wrong now is for people of color to deal with — it’s their fault now.”

“Difference in hue and hair is old,” Coates wrote. “But the belief in the preeminence of hue and hair, the notion that these factors can correctly organize a society and that they signify deeper attributes, which are indelible — this is the new idea at the heart of these new people who have been brought up hopelessly, tragically, deceitfully, to believe that they are white.”

In “Between the World and Me,” Coates mentions the idea of a dream. According to Coates, white people felt they were promised and entitled to slave ownership before the Civil War.

They built an organization around the basis of slave labor, Coates said, that they ultimately fought to keep. Coates said he believes the installment of fear in black bodies is linked to the that dream.

During his childhood, Coates said he noted the look of fear on his parents’ faces when they knew they could not protect their children. Coates said he has the same feeling of fear when it came to his son.

“Black people love their children with a kind of obsession,” Coates wrote. “You are all we have, and you come to us endangered.”

In his book, Coates describes the role of race as “the child of racism, not the father.” He said the ideology needs to be conquered without connecting it to the actual concept of race.

“I can be black and still have my culture and my music,” Coates said. “But it’s not natural to see someone choked to death.  It’s not natural to watch someone sell CDs and then be shot dead.  These are dumb things, and we need to adopt a vocabulary that reflects that.”