Will third party candidates make a difference in 2016? 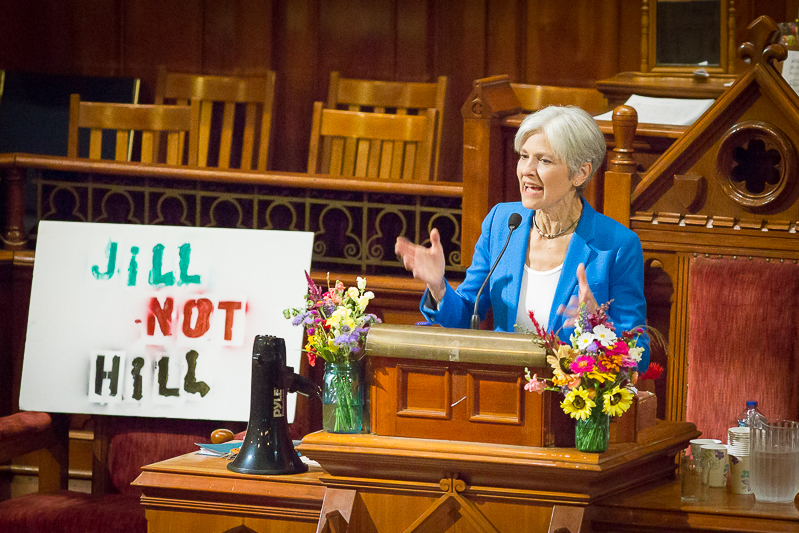 Though Stein’s campaign has been on the outer fringe of the political scene for the last several years,  two recent major polls have found that more than one-third of voters under the age of 30 plan to vote for either Libertarian Party nominee Gary Johnson or the Green Party’s Jill Stein instead of either Clinton or Trump in November.

A defection by Millennials of that size could be devastating for Clinton; in 2012, President Obama won 60 percent of voters under the age of 30, and the bloc provided a crucial advantage in his victory over Mitt Romney. In the 2000 election, many supporters of Democratic presidential candidate Al Gore complained about the “spoiler effect” of the candidacy of third party candidate Ralph Nader.

Stein appeals to supporters of Vermont Senator Bernie Sanders. She is unafraid to make her voice heard when it comes to the environment. During her speech, she spoke about the vandalism charges she faces after spray painting property at a Dakota Access Pipeline protest earlier this month.

Stein said she supports a “peace offensive” in the Middle East. The proposition entails a weapons embargo and would put a freeze on funding for allies who harbor terrorists.

Not long ago, the general public perceived the Green Party as “a bunch of nut jobs” and considered her campaign on the outer fringe of the political scene, Stein said.

But this year, Stein believes voters have changed their minds.

In Massachusetts, some Green Party supporters are prepared to use their votes to make a statement.

“We need to say enough is enough, and now, not after the election, we must start fighting for change,” said David Woodsome of the International Socialist Organization of the University of Massachusetts Amherst.

“It’s upon us as a society to change that system,” she proclaimed before a roar of applause.

Roberta Fox of “Berners for Jill Stein,” explained that now that Sanders is off the ticket, she and many other Sanders supporters will shift their votes to Stein.

Abby Nash and Mica Reel of Divest UMass, a campaign that led UMass officials to formally divest from fossil fuels after 34 arrests and several days of sit-ins at Whitmore Administration Building, also spoke at the event.

“A fight for climate justice is also a fight for social justice,” Reel explained.

Gretchen Siegchrist, 36, of Holyoke said she knows Stein will not win the election, but will vote for her anyway.

“In places like Massachusetts, people have the power to vote their conscience and make a statement,” Siegchrist said.

Casey Pease, 19, a sophomore political science major at UMass, stood outside the church before the event, clad in Bernie Sanders gear. Pease, who served on the Sanders’ campaign this year, has a different perspective on voting for third party candidates.

“I think it’s important that people view their vote more strategically,” he said, ” because at the end of the day, people who vote for third parties are simply not going to see their choice as president.”

This year’s presidential election will be held on Tuesday, Nov. 8. The last day to register to vote in Massachusetts for this election is Oct. 8.