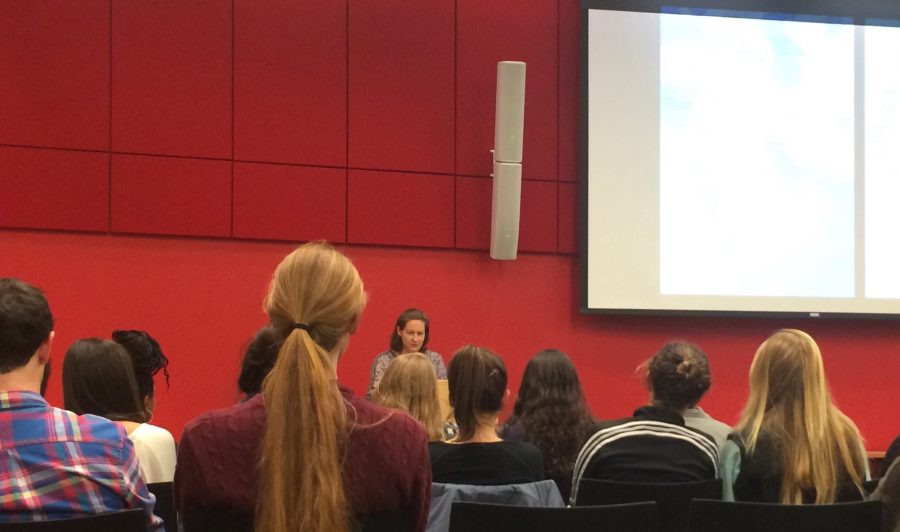 AMHERST — Recounting the Palestine that few people have experienced, author Pamela Olson discussed her book “Fast Times in Palestine: A Love Affair with a Homeless Homeland” on Tuesday night to the public and members of the UMass Students for Justice in Palestine Club.

She shared her experiences in Palestine and called student activists to action.

Over a decade ago, Olson decided to go on a trip to Palestine after graduating college. She said she was captivated by the experience. Because she was so moved by her experience in Palestine, she extended the duration of that first visit from three days to five weeks.

Pictures from her trip were projected as she detailed the culture and natural beauty of Palestine that caught her eye. Olson said she showed pictures of “nice happy things because people don’t see that.”

Her passion led her to return for two more years where she witnessed the gravity of the situation that was unfolding. Pictures of the gorgeous landscape had turned into rubbles of a city.

Olson went on to detail her experience living in Palestine. In one example, five hundred checkpoints or roadblocks were imposed. If someone snuck through these checkpoints, they could die.

“You risked being shot or arrested by settlers,” Olson said.

It is experiences like Olson’s that provide a first-hand account of what it is like in a place foreign to student activists. She told attendees that while all her experiences occurred in Palestine, they would not have to look too far to see things similar to what she experienced.

“When I look at Trump supporters, it reminds me of groups that chant ‘Death to Arabs’ [in Israel],” Olson said.

According to Josh Strassman, vice president of the Students for Justice in Palestine Club, Olson’s message is effective. Olson’s presentation made students aware of what is happening overseas and exemplifies the need for a call for justice, Strassman said.

“One of the main things that we want to do on campus is educate the community on the occupation and what’s happening on the ground,” Strassman said. “This is a good way for people to come and understand the daily violence and hardship.”

At the end of Olson’s presentation, she acknowledged the work being done by student groups like Students for Justice in Palestine at UMass.

Looking to the future, the lingering call to action will not be answered until the oppression and violence in Palestine come to an end, according to UMass Students for Justice in Palestine.

Because of this, the student group is pushing for more.

When pressed on what the group might do next, Strassman laid out tentative plans for the future, which include pressuring UMass to divest from companies that support or are complicit in the Israeli occupation of Palestine.

“One of the things that we’re really hoping to do this year is to pressure the university to agree to adhere to the boycott divestment sanction principles, which would probably look like the university divesting from companies that invest in or are complicit in the occupation,” Strassman said. “We’re hoping to spread that campaign this year.”