‘Neoslavery’ still lurks in the U.S., according to Dennis Childs 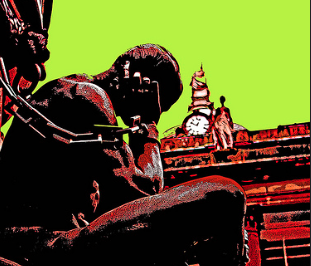 AMHERST — Dennis Childs, author of “Slaves of the State,” challenged the idea that the Civil War and the Thirteenth Amendment ended slavery in America Thursday evening.

Childs, an associate professor of African American literature at the University of California San Diego, gave a presentation titled “U.S. Neoslavery: A History of the Prison Industrial Present,” in the Bernie Dallas room in Goodell Hall at the University of Massachusetts Amherst.

The talk was a part of a lecture series, “The U.S. in the Age of Mass Incarceration,” put on by the university.

In an impassioned, hour-long lecture, Childs argued after the Civil War, alternative forms of slavery persisted in American society under the cloak of the United States penal system. This slavery continued disproportionately against people of color throughout history, Childs said.

The Thirteenth Amendment reads “Neither slavery nor involuntary servitude, except as a punishment for crime whereof the party shall have been duly convicted, shall exist within the United States, or any place subject to their jurisdiction.”

The qualifying clause that permits slavery as punishment for a crime effectively “re-inscribed slavery through the penal system” for black Americans, Child said.

Rather than marking the total end to slavery in America, Childs said the Thirteenth Amendment marked a transition “from the prison of slavery to the slavery of prison.”

According to Childs, the United States incarcerates citizens at the highest rate of any nation in the world.

“Seven out of ten people in cages today are people of color,” Childs said. At current rates, he continued, “one out three black boys born today will spend time in prison.”

This racially disproportionate system of mass incarceration has deep historical roots, according to Childs.

Childs explained black labor was exploited by the justice system in the decades following the Civil War. This happened in two ways, he said, through the convict lease system and the chain gang.

Childs explained that in the convict lease system, which persisted across the American South from the 1860’s until the dawn of World War II in the mid-1900’s, black Americans were bought and sold by white businessmen. They were state-leased convicts who could not afford to pay the fines imposed on them for their alleged crimes.

According to Childs, many people leased out to private businesses were the victims of black codes or laws aimed at controlling black Americans.

“It wasn’t about what you did, but who you are,” Childs said.

Once the state leased these people, they became the temporary property of private citizens and businesses until they could work off the fines imposed on them by the state. Childs said “millions of people called sharecroppers were actual prison slaves.”

During the event, Childs read aloud a letter written to President Theodore Roosevelt in 1903 by a black woman. Her husband had been leased by the state to a private farm. Child depicted the ways these prisoners were subjected to inhumane punishment. Childs said the punishments were disturbing, “including severe whippings, mauling by bloodhounds and even rape.”

Childs also argued black convicts condemned to chain gangs in the late nineteenth and early twentieth centuries were the victims of American neoslavery.

He said black convicts put to labor on public works were “boxed and crammed into portable cages” while building roads and railways. As he showed pictures of these conditions, Childs argued they were reminiscent of “slave ships of the middle passage.”

While these systems were notably different than the chattel, or personal, slavery of antebellum America and the pre-Civil War era, Childs said throughout the lecture that they constituted a form of neoslavery. It was a system in which “overwhelmingly black convicts” were forced to labor against their will, Childs said.

According to Childs, black convict neoslave labor was responsible for “building nearly the entire infrastructure of the South, including roads and railways.”

After raising that point, Childs paused.

“How many of you read about neoslavery in high school?” he asked.

Not one hand was raised.