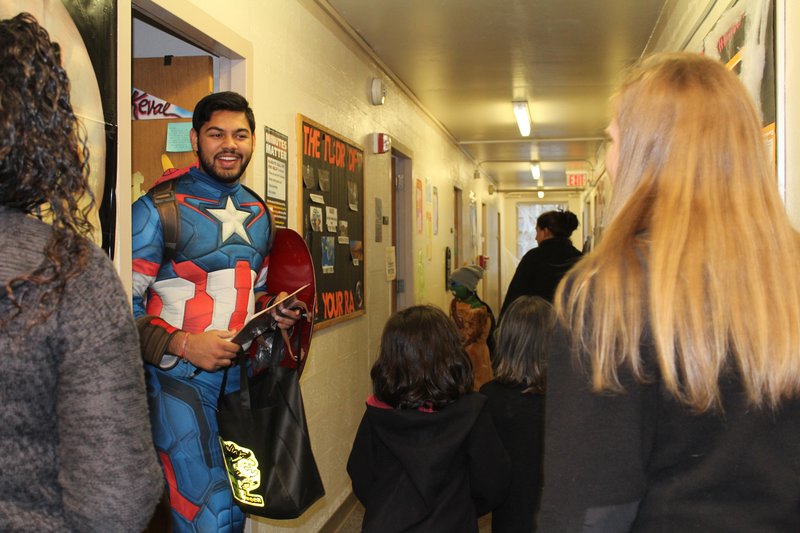 AMHERST — “Trick or Treat!” shouted the array of astronauts, minions and bumblebees as the Amherst community came together Monday, Oct. 31 for a night of trick-or-treating in residence halls at the University of Massachusetts Amherst.

The fifth annual Halloween event was successful its intent to integrate UMass student culture with the town of Amherst. It attracted over 100 students and community families.

“We wanted our area and the university as a whole to involve the Amherst community in one of our events,” said Pranav Heryani, Northeast Area Governor and freshman environmental science and economics major. “We thought it was important to reach out to them, and do our best to fit into that community.”

The two-hour trick-or-treating event opened select residence halls within the Northeast Residential Area, and provided parents and children of Amherst a twist on the traditional Halloween happenings.

Northeast government leaders asked residents whether they would want to participate in the Halloween festivity by giving out candy. Participating residents doors were marked with a sign, and trick-or-treaters could knock for candy.

Beth Wallace, the communication manager for the UMass Amherst Journalism Department, brought her young daughter, dressed as Tigger from Winnie the Pooh, to trick-or-treat at UMass.

“We love coming to the dorms. You can just go to door-to-door inside and it’s much easier,” said Wallace. “It’s warmer, and you don’t have to worry about the weather so much.”

The event doesn’t only work to expand traditional culture among the local community. It takes a broader look into American culture for those who may never have experienced it.

“It’s really cool and really different. At first, I was like there’s a day where people just dress up as things?” said Stephen, a native of Nigeria.

“I find it interesting because something scary is related to candy,” said Cicekli of Turkey, followed by collective laughter from the group of three.

The group of girls were both excited and apprehensive in participating in Halloween festivities.

“We’re having a good time,” said Chinese native Hsue, as she waited for new trick-or-treaters to reach their floor.

The event was accompanied by plenty of smiles all around- from children to candy-givers alike.

“I love the smiles. It’s the best. Every year it’s why I keep doing it,” saidKeval Kapadia, a senior studying legal studies and economics. This was the fourth year Kapadia has dished out treats for the event.

“It was certainly a pleasure to have organized everything. It was a joy to see the smiles on the faces of the kids. It was great to see the residents so excited about giving out candy or monitoring the halls, and overall it was a great success,” said Stephen Condon, lieutenant governor of Northeast Area Government.

Northeast Area Government officials are looking to continue the events for following years and work towards garnering in more members of both the student and Amherst community to participate.

“As for next year, I want to have our meetings earlier in the year, and work to get more candy and volunteers,” said Condon.