"If you aren't attending to power and inequality, you aren't doing intersectionality" 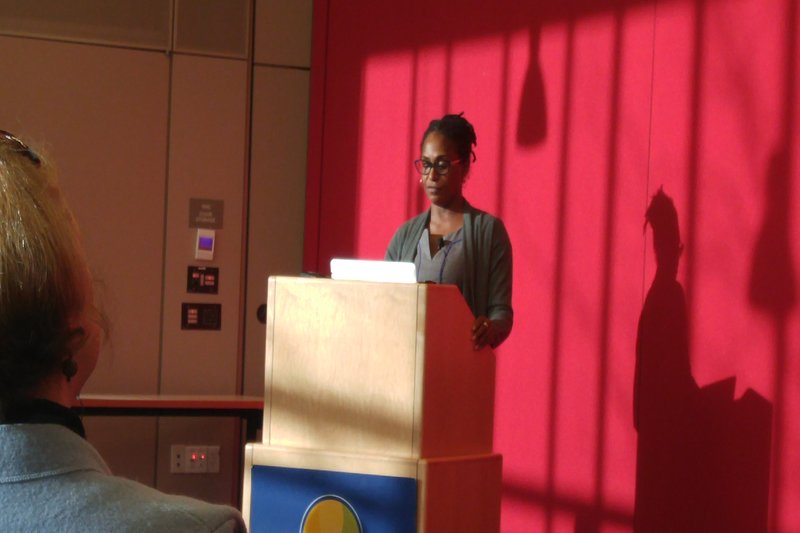 AMHERST — Lisa Bowleg, professor of applied social psychology at George Washington University, gave a talk at the University of Massachusetts Amherst Thursday on the intersectionality of different elements of identity.

The talk, titled “‘Ain’t I A Woman?’ and ‘I Am a Man’: Intersectionality’s Travels from Black Feminist Theory to HIV Prevention and Sexuality Research with Black Men,” was given at the UMass Amherst Commonwealth Honors College Thursday afternoon.

“I’ve never met a short title I’ve liked, ever,” Bowleg said, met by a laugh from the crowd.

Bowleg defines intersectionality as a framework to understand how multiple social identities intersect at the level of individual experience. She argues that understanding the micro-level helps to understand the larger system.

Bowleg explained that identity is complex. Individuals identify with multiple groups via their gender, race or socioeconomic status. Focusing on a single identity without considering its intersection with another identity provides a limited understanding of an individual’s experience.

Intersectionality comes from a place of social justice to examine issues beginning with the lived experiences of people’s everyday lives.

Bowleg read aloud insightful feedback from one of her research focus groups.

“‘Well, it’s hard for me to separate [my identities] … Like once you’ve blended the cake you can’t take the parts back to the main ingredients,’” said Nigel, a 37-year old man in the Washington D.C. area. “‘I’m a gay man. Also there has to be something to say about the aspects of being a black man.’”

While heterosexual men make up the lowest risk group, black men constitute a disproportionate number of HIV diagnoses. In 2014, an estimated 2,700 black men learned of their HIV prognosis according to a 2012 figure by the Center for Disease Control.

According to information from the U.S. Census, about 13 percent of the United States population is black.

Concern over police violence was one of the main themes to come out of the Washington D.C. focus groups. HIV prevention ranks low on the list of priorities, which Bowleg highlighted as she read focus group responses of heterosexual black men.

“‘You can’t see AIDS. Your present reality is that the police are on you all the time … Another participant said, I’ve got 99 problems and I sure ain’t thinking about HIV at the end of the day,’” Bowleg said.

She paused a moment.

“I love this quote. This is going to be one of the titles of an upcoming paper … I don’t care if we are doing a paper on breast cancer,” Bowleg said with a smile. The packed room erupted with laughter.

The late Sojourner Truth was one of the original intersectionality theorists.  At the 1851 Women’s Convention in Akron, Ohio, Truth famously delivered her “Ain’t I a Woman?” speech which dealt with her experience living within two marginalized groups.

“Her race is mutually constituted with her gender. So clearly she’s a woman, but her issue is she is a black woman. These parts cannot be extricated from each other,” Bowleg said.

The goal of Bowleg’s research is to apply an intersectional framework to larger, quantitative studies that will address the data void of black, heterosexual men. Bowleg cited the Take Charge Campaign which targeted exclusively black women in HIV prevention.

“There’s no comparable campaign focused on black men’s responsibility in HIV prevention. Everything is framed in terms of campaigns through black MSM [men who have sex with men] and black heterosexual women. A whole group is absent,” Bowleg said. “It is important because black, heterosexual men do exist.”

This talk, on the intersectional framework, was part of the Tay Gavin Erickson Lecture Series at the University of Massachusetts Amherst. The next installation, Early-Life Chemical Exposures and Female Puberty-Related Outcomes in Animal Models will be held Nov. 29 with Suzanne Fenton.