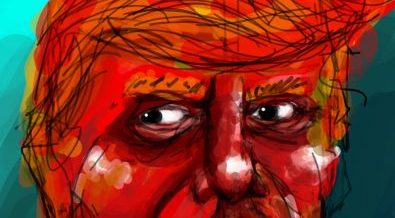 Regardless of who you voted for, the presidential election has come as more than a surprise to a multitude of folks — from the average American voter to the politicians of the highest and lowest offices.

While there are a plethora of factors leading to the rise of Donald Trump taking the most powerful office in the country, one aspect is forgotten.

Yes, we can look at the dissatisfaction with Congress, the pent up rage of the right wing, the chance for bigots and racists quieted by a mostly left-leaning hypersensitive society to have a voice, the circus that was the 2016 primaries, the crap quality of public education and even yes, the liberals who created an environment that made the right-leaning folk’s skin boil with sobbing college students, safe spaces and tidal waves of political correctness. But that’s not what we’re looking at today.

Trump’s rocket to the White House has a very important ingredient in its fuel: Popular culture.

Trump has been a media man for decades. He created such a personality for himself, a profit-hungry media just couldn’t bear to touch him. But what we have seen, even in this election is not the man Donald Trump, but the character Donald Trump.

Trump’s understanding of character presentation, combined with the modern political climate of the United States, has allowed him to take the filthy rich ruthless businessman persona to shift into the ultimate American favorite archetype: the rebel.

Yes, the rebel. Our country was founded on the principle of rebellion taking on a force much greater and more powerful than itself. Our country — with the help of French and Dutch folks — managed to bring one of the most powerful empires of the era to its knees and declare independence.

Since then, the anti-hero, the rebel, has become an icon in American pop culture.

We are a nation of consumers. Meat, plastic, film, drugs, comic books, music, video games, gas, violence, debt, books and magazines all funnel into our bloodstream on a daily basis through a variety of media.

Whether we want to acknowledge it or not, certain trends, archetypes and narratives become an embedded part of our psyche through mass media.

Rebels vs. the Empire.

It doesn’t get much more blatant than that.  These people are fighting some big, bad, monolithic power. Somehow they manage to prevail against all odds and blow up the planet-shattering super weapon in the nick of time. How many stories have been made where the protagonist is somehow outside or turning against the system?

The cop who doesn’t do it by the book.

The patriot warrior who betrays the corrupt government he works for the greater good.

The criminal we all keep rooting for.

The vigilante who ignores the laws of the police for the greater good.

The badass cowboy or cowgirl who caps the corrupt sheriff.

America loves a rebel. Even though many of these stories are works of fiction, their importance in our collective psyche is not lost on us. Entertainment is far more than it appears to be.

Next, take the narrative of the rebel and place it into the real world. The political establishment in Washington will be our Galactic Empire.

The people are the oppressed citizens who no longer feel their voices are heard. There is general discontent with congress on both sides as well as the corruption of the elected among voters and citizens alike. Every politician that seems to pass by is another cookie cut product of political establishment.

Apathy starts to set in among the American voter.

He says what’s on his mind, regardless of the validity. He cordially tells rulers to go f*** themselves as he grabs his campaign by the you-know-what.

The establishment is in utter shock. How is he even still running his campaign? How can he be taken seriously? This plays perfectly into the role of the antagonistic establishment. The American public are secretly conditioned to love it.

And who do the Democrats push out to be the foil against the rebel? Hillary Clinton.

With the exception of her gender, unfortunately, this woman is the embodiment of establishment. She’s been in politics for decades. She’s worked with the dreaded Obama administration.

If there is anything that pop culture has taught us, it’s that the rebels always have to win. Despite Clinton’s array of experience, aptitude, qualifications, expertise and intelligence, she’s still seen as the villain.

Trump is the antithesis of this. He’s the rebel. The Neo. The King Leonidas to fight for the oppressed Republican voter and bring down the big bad Democrats.

While this is far from the only factor that leads to the results we see today, it still plays an important part in the first reality television star to become the leader of the free world. I ask you, the reader, to observe your entertainment more.