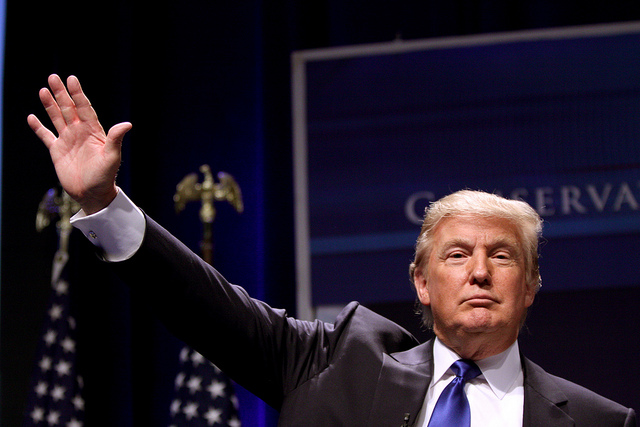 Students and community members gathered in the Stirn Auditorium at 8 p.m. to hear Douthat introduce an explanation for the rise of Trump within the Republican Party.

“When I was invited to speak I thought … that I would be speaking to you tonight in the aftermath of Donald Trump’s defeat,” he said.

Like many other individuals, Douthat thought Democratic candidate Hillary Clinton would walk away victorious from the 2016 presidential election. The crisis of conservatism is then more complicated than Douthat originally believed. It’s a crisis not just of conservatives, but one that affects liberals as well.

He referred to Trump’s victorious campaign as one of the “lowest of lowbrow presidential campaigns that anyone could imagine.”

Douthat said that the idea of conservatism is one that is relative to each country. Conservatism within the United States seeks to conserve distinctive aspects of American culture, American politics and American society, he explained.

This includes conserving a commercial republic and an entrepreneurial and highly capitalist spirit.

In the 1960s and 1970s,  Douthat said conservatives saw the “liberal order” in crisis. A social crisis was entangled with events of the sexual revolution, which lead to high divorce rates and the breakdown of the traditional American family.

Due to these crises, conservatives started to attract the American people that felt failed by their government.

This social crisis began to resolve when conservatives started to run campaigns supporting harsher law and order, which lead to a decline in crime rates in many cities. The social crisis also started to stabilize, Douthat said, with abortion and teen pregnancy rates decreasing during that time.

However, things were soon to spiral.

“Conservatism then became a victim of its own success,” Douthat said.

With a more stable society there were less immediate issues concerning the American people and they started to move away from conservative ideology.

American people began to care more about things such as healthcare costs and wage stagnation rather than conserving American values and ideals he said.

“[Conservatives] no longer had a message that connected viscerally with a lot of voters,” said Douthat.

Then, under the  George W. Bush administration, 9/11 sparked a new foreign policy issue that made terrorism attacks on American soil the focus. This instilled in Americans a deep fear of terrorism, and attracted voters to the conservative ideology.

Conservative politicians illustrated the issue as one rooted in nationalism. This republican ideal focuses on protecting the American people and the traditional ideas of what America should be.

“People would vote for [Republicans] to keep America safe,” he said.

With the Republican losses in 2008 and 2012, conservative voters were looking for a “champion” and “leaders to solve immediate problems.” Then Donald Trump ran as a Republican.

Douthat explained Trump’s primary campaign’s strategy in which Trump went to conservative voting areas that also suffered economically and spoke to the voters himself.

“He held big rallies where he promised everyone they would get their jobs back,” Douthat said.

Unlike the traditional conservative vision, Douthat said Trump tied white identity politics into his campaign platform, making it a visible theme that attracted his voters.

His outsider status and ability to address these voter’s immediate concerns unlike any Republicans to come before him “elevated him to the nomination” said Douthat.

Trump was able to “address grievances” of middle class and working class voters, something Hillary Clinton was not able to do, he said.

Painting himself as anti-establishment, Trump did not use the traditional political jargon  other candidates used during the election. This shift away from intellectualism in politics resonated with the working class voters without college degrees who felt politicians had not spoken to or for them in some time.

Moving forward Douthat said that conservatives and liberals need to understand Trump and his success of reaching out to working class voters.

Conservatives focused on choosing issues that address voter’s fears in America. Trump harnessed that fear and it showed in the voting booths.

He explained that liberalism failed within the election as well. To address the concerns of people who wish to preserve cultural identity Douthat explained liberalism’s only answer is to call these individuals bigoted or racist, which does not work.

“Otherwise, even if we survive this ‘Trump-ining,’ there will be many more ‘Trump-inings’ to come,” said Douthat.