The Hampshire College flag debate: What you need to know 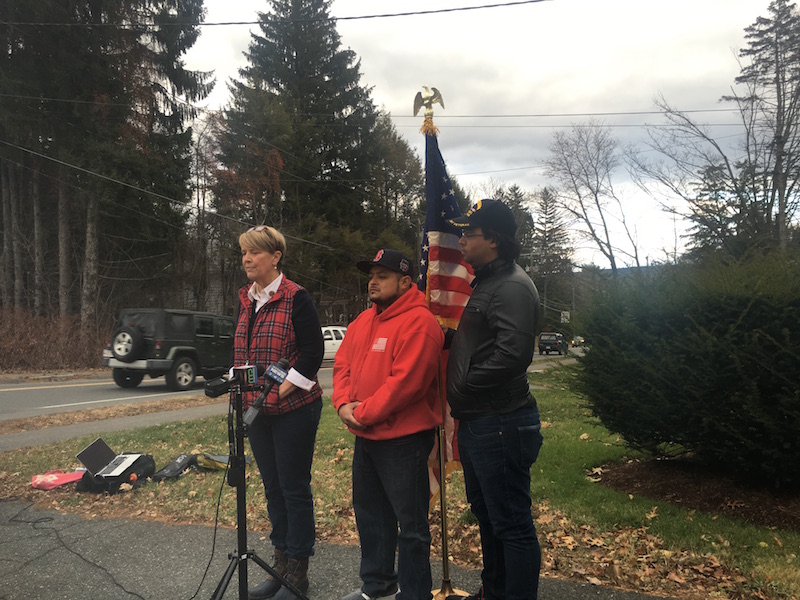 Hampshire College raised the American flag in the heart of its campus Friday morning, two weeks after it was removed Nov. 18. Hampshire College President Jonathan Lash released a statement Friday saying he deeply regrets those hurt by the earlier decision to remove the flag.

The absence of the flag sparked national attention, and a protest drew some 500 people to the Hampshire College entrance last Sunday.

The campus climate at Hampshire College has not been the same since the removal of the flag. According to Lash, the students and community at Hampshire are “alarmed by the overt hate and threats, especially toward people in marginalized communities, which have escalated in recent weeks.”

Pro-flag protesters held a press conference Friday afternoon at the Amherst VFW in response to the flag’s return to campus. Leader Victor Nunez Ortiz, 34, said a protest planned at Hampshire College on Sunday, Dec. 4 is still on.

But rather than a protest, it will be a celebration.

In his official statement, Lash wanted to emphasize that the decision for removal was not political and he or anyone in the Hampshire community did not intend to offend anyone or cause harm to veterans or their families.

The President-elect called for punishment for those who burn American flags with a year in jail or loss of U.S. citizenship.

Despite Trump’s disapproval for this action, it is legal and protected under the First Amendment as a freedom of expression.

In fact, a flag burning dispute was solved in 1989 in the Supreme Court case Texas v. Johnson. The flag-burning controversy started in 1984 when Gregory Lee Johnson burned an American flag at the Republican National Convention (RNC) to protest the Republican nominee, Ronald Reagan.

Johnson was arrested and charged with desecrating a venerated — or sacred — object, which included the American flag. Johnson was tried and convicted in a Texas court. Johnson appealed the case, claiming that his actions during the RNC were “symbolic speech.”

The Texas Court of Criminal Appeals reversed the decision to convict Johnson, citing that it was inconsistent with the First Amendment and did not present a “clear and present danger” as it did not cause any harm to bystanders.

The Supreme Court ruled in a 5-4 decision that Johnson burning the flag was considered “symbolic speech” and was therefore protected under the First Amendment. According to then-Justice William J. Brennan, “If there is a bedrock principle underlying the First Amendment, it is that the Government may not prohibit the expression of an idea simply because society finds the idea itself offensive or disagreeable.”

History has found a way to repeat itself — right here in Amherst.

Hampshire College finds itself in the middle of what many are calling an offensive and disagreeable controversy. Following the election, Hampshire College and its administration made the decision to remove the American flag from its campus after the outrage that occurred among students after deciding to fly the flag at half-staff on Nov. 11 — Veteran’s Day.

On Nov. 18, Jonathan Lash, president of Hampshire College, said flying the flag at half-staff “was meant as an expression of grief over the violent deaths being suffered in this country and globally, including the many U.S. service members who have lost their lives.”

According to Lash, “Some have perceived the action of lowering the flag as a commentary on the results of the presidential election — this, unequivocally, was not our intent. After some preliminary consultation with campus constituents (much more is needed), we decided today that we will not fly the U.S. flag or any other flags on our college flagpole for the time being.”

Hampshire College has the full official statement from Lash on its website.

The administration’s decision to remove the flag is when a social media firestorm erupted.

The controversy caught the attention of Veteran’s groups, in particular Gamalier Rosa, an Iraq war veteran. This spurred him to organize a protest, saying, “The removal of the flag was an act of disrespect for the sacrifices of veterans and their families.”

Rosa said local veterans will continue to pressure the college until the flag is raised.

On Nov. 27, some 400 people gathered to participate in a “peaceful demonstration of freedom” to protest the removal of the flag on the Hampshire College campus.