Will the new villain on ‘The Walking Dead’ revive the show to its glory?

Negan: The delightfully-evil character that viewers have been waiting for 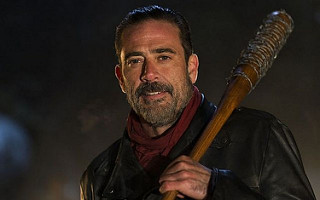 AMC’s “The Walking Dead” has been a staple of America’s Sunday night programming since the show aired on Halloween night of 2010. Every season has registered above a 75 percent on Rotten Tomatoes thus far. Since Season 3, the zombie apocalypse has drawn in an average of 10 million viewers per episode. These statistics are undoubtedly impressive and support the fact that “The Walking Dead” is one of the most successful shows on television.

However, things seem to have gone a bit stale for the AMC juggernaut. Season 6 registered the lowest Rotten Tomatoes score in the show’s history at 78 percent. Since Season 7 began, the show has dropped to its lowest number of weekly viewers in four years.

Then along came Negan, a new character played by Jeffrey Dean Morgan who provides a fresh, thrilling twist to the show with his portrayal of this unique villain. Negan has already brought certain elements to the table that no other character has been able to, giving viewers hope that he just might have the potential to bring “The Walking Dead” back up to par.

Any good villain needs to be played by a good actor. Although he only got a few minutes of screentime in the Season 6 finale, Negan immediately introduced us to a brand new type of villain. What he did in his 15 minutes of screentime caused equal parts captivation and fear among viewers. Morgan depicted a type of creepy that people only confront in their nightmares.

His ability to seamlessly switch between a terrifyingly satisfied grin and an angry, dead-seriousness was masterful. His introduction, chuckling while enlightening Rick Grimes on the gravity of his current situation was haunting.

“You ruled the roost. You built something. You thought you were safe. I get it. But the word is out. You are not safe. Not even close,” Negan said. These lines were delivered with such passion and ferocity that you could physically see the rage in his eyes.

Contrast that with his signature pre-clubbing line of, “You can breathe, you can blink, you can cry. Hell, you’re all gonna be doing that,” was delivered with a such a large, Grinch-like grin, that you knew his character thoroughly enjoyed torturing his victims.

After his first moments on screen, Morgan has continued to flawlessly express how delightfully evil his character is. He showed this side of Negan when Rick Grimes questions his early arrival to Alexandria, in which Negan responds to a grave and serious Rick by simply saying, “I missed ya!”

Morgan also showed Negan’s serious and motivational side when he gave his speech to the Saviors during this week’s episode “Sing me a Song.” Negan talks about how his group is the one that will “bring civilization back to this world,” and that civilization can’t come back “without rules.” His speech shows his desire to restart society and to do so in an organized and systematic fashion.

Morgan has exhibited a strong depth of character with his portrayal of Negan. He’s been funny, cruel, charming and horrifying all at the same time. His acting has been a bright spot and the more he’s is on screen, the better the show gets.

What we haven’t seen yet

We live in an era of entertainment where one-dimensional and “evil for the sake of being evil” villains don’t intrigue audiences the way more dynamic ones do. It takes a villain with unique motives — like Ledger’s Joker proving how ugly the world is — or a tragic backstory to truly captivate and entertain audiences. There are some critics who would disagree with this article on the grounds that Negan has lacked either of those components in his character. But to counter that point, I say ‘stay tuned.’

“The Walking Dead” has done a phenomenal job in the past of highlighting why their characters have become the way they are, especially in the case of villains. The reveal about the Governor’s daughter and the tragedy behind his family was a solid attempt at humanizing and the backstory behind Terminus and the cannibals that inhabited it was a stroke of genius.

Negan is going to have a backstory, a reason why he is the way he is. Whether it be expanding on why his bat is named Lucille or perhaps an abusive family environment pre-apocalypse, expect Negan to become more dynamic.

The way Andrew Lincoln portrayed the breaking of Rick Grimes in the Season 7 premiere was truly a tremendous piece of acting. Over the years, we’ve seen Rick change from a protective father and husband with a “live and let live” philosophy, to a shoot first, ask questions later type of dictator.

Looking at Rick and Negan from afar, the two characters are extremely similar. They both lead survivor colonies with an iron fist, both believe in using violence as a means to survive and both are methodical and calculating. However, Negan provides a side of the leader archetype that Rick doesn’t — comedy.

The foil between these two became most evident during last Sunday’s episode “Sing Me a Song.” When we see Rick with Carl, he acts as a stern and serious father, trying to protect and teach his son on the journey to adulthood. When Negan is with Carl, he acts like everyone’s crazy uncle who lets them do things their parents wouldn’t. Negan gives Carl a look at his wives, lets him hold his beer and trains him in the art of ball-busting. Negan and Rick are flipsides of the same coin — brutal, borderline-despotic leaders bent on survival at all costs. The only difference is the attitudes and personalities they use when approaching these tasks. It’s an interesting comparison that audiences should consider more when watching.

There’s a lot to discuss when talking about “The Walking Dead” and the way in which it goes about exploring its characters. Although he has been underutilized to this point, Negan could very well return this show to its dominant supremacy and bring us a version of the show viewers can be satisfied with.