“Without Craig’s Place, many individuals will have to sleep outside, and some of them will die" 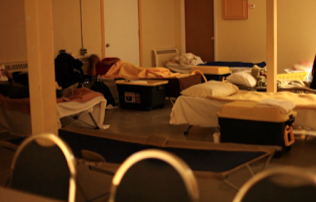 AMHERST — Craig’s Place, an emergency homeless shelter located at the First Baptist Church of Amherst, is racing against the clock to secure $200,000 in funding that has been put on hold by Massachusetts Governor Charlie Baker due to a state budget deficit. Without funding, the shelter is in jeopardy of closing,

If that happens, dozens of its patrons will be forced onto the streets in the dead of winter.

Craig’s Place is operated by Craig’s Doors, a non-profit home association based in Amherst focused on helping those without a home or shelter.

Baker affirmed his plans on Tuesday to make state budget cuts — totaling $98 million, according to MassLive. As a result, Craig’s Doors could lose its funding,

In a press release, Craig’s Doors says that while there is uncertainty looming, there are multiple possible outcomes. Nothing is for certain yet. Kerry Brock, a manager at Craig’s Place, said the shelter will know its fate Thursday.

Throughout the course of a year, Craig’s Place houses nearly 170 homeless people. The shelter accommodates approximately 28 people each night from November to April.

With another brutal New England winter looming, Brock noted the funding could be a matter of life or death for some patrons.

“Without Craig’s Place, many individuals will have to sleep outside, and some of them will die,” the press release said.

“It’s so important,” Brock said. “This place saves lives on a nightly basis and for it to shut down, I’d be really scared to see what’d happen to the people that stay here because a lot of them don’t have anywhere else to go.”

According to Rebekah Wilder, executive director of Craig’s Doors, Baker’s budget cuts are unprecedented for the shelter.

“Craig’s Doors has never had such intense uncertainty before around funding,” Wilder said.

In light of the circumstances, the shelter started a GoFundMe page to raise money to stay open through the winter.

The shelter is not alone in its efforts. From hosting an open mic fundraiser to donating excess dining hall food, various clubs and organizations at the University of Massachusetts Amherst are committed to helping the shelter.

Anthony, who did not wish to disclose his last name, is a homeless individual who is dependent on the services Craig’s Place provides. He commends the effort from the clubs and organizations at the university.

“I think the support is awesome. The community does care … I think that is showing them that they have a heart and that they care for the homeless,” Anthony said. “In return, I’d like to work with the community and help others.”

As an advocate for homeless individuals’ rights, Anthony knows firsthand that funding can make all the difference.

“We need a place to stay … Nobody wants to stay outside in the cold,” Anthony said. “No homeless person wants to suffer, and I wouldn’t want to see that.”

“We’ve got nowhere to go after this. I don’t personally … We’re scared about not having somewhere to go if they don’t find funding for the shelter,” Anthony said.

While the shelter’s fate is still uncertain, the call for help has been greater than ever.

“We have a responsibility as students … as someone in this town to also give back to the town and the people in need here since they give so much to us,” Brock said.

In one final plea, Anthony asks the governor, “Hey — why not take care of our own?”

To help Craig’s Doors, donate money through their GoFundMePage, or call Governor Baker’s office at 617-725-4005.