From D.C. to Dublin: A first-hand look at Women’s Marches around the world

Amherst Wire captured the sights and sounds of the historic protest 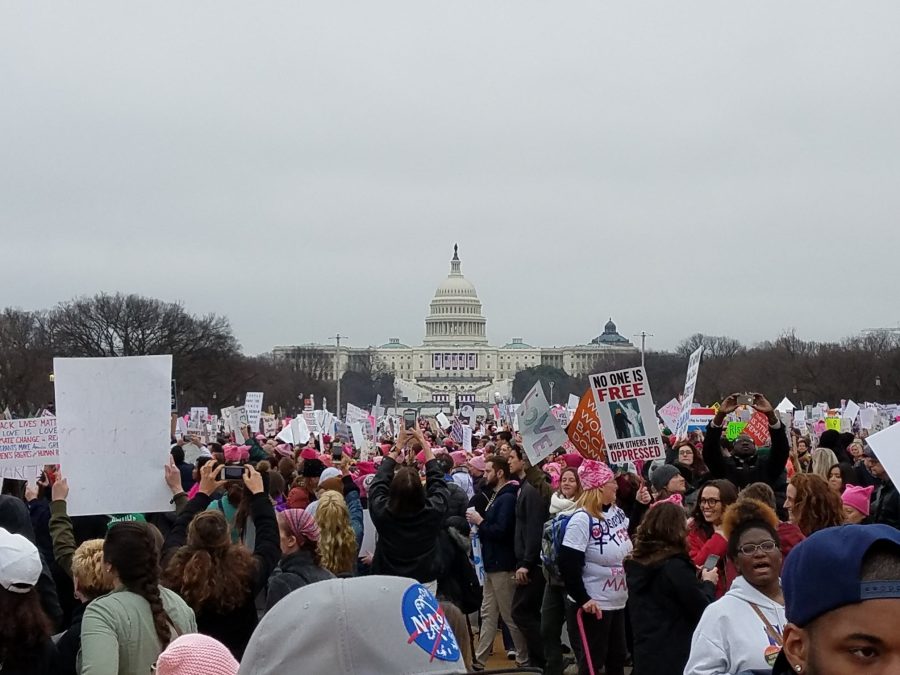 The Women’s March united over 2.5 million people to sound off against President Donald Trump’s discriminatory rhetoric and issues that impact the intersectional identities of women across the globe, including the potential defunding of Planned Parenthood, identity-based inequities and more on Saturday.

Amherst Wire reporters turned out to cover marches across the globe, from the flagship march at the nation’s capital — which gathered a crowd so large there was no room to actually march — to as far away as Dublin, Ireland.

This is what they saw.

The following is an excerpt from an upcoming editorial by Emilia Billett.

More than twice as many people showed up to the Women’s March in Washington, D.C. than were expected.

The crowd far outstretched the range of speakers’ voices, as well as the space that organizers had intended to lead a march through.

The city was overtaken by a hundred smaller break-off marches to the White House, with protesters flooding through every tiny side-street in the neighborhood and leaving no space untouched.

No destruction of property was reported, arrests clocked in at zero and government services from police to first aid all cooperated beautifully with protesters, as protesters did for them in turn.

By Bryan Bowman and Jon Decker

On the first full day of Donald Trump’s presidency, some 175,0000  protesters descended on Boston Common to participate in the Women’s March, a worldwide event that drew millions of participants across the globe.

Many of the marchers wore pink caps that stuck out like little fluorescent buoys in a seemingly endless sea of protesters.

Packed trains brought demonstrators from across the Commonwealth, who held signs and sang songs like “This Land is My Land” and “Lean on Me.”

Ian Camble of Cambridge was overcome by the sense of community he felt throughout the day.

“Isn’t this amazing?” Camble asked while gazing at the crowd from the top of a hill. “There’s so much positive energy here.”

The event kicked off at around 11:15 a.m., opening with the Boston Children’s Choir singing America the Beautiful in unison with the ever-growing crowd. The choir was followed by Reverend Mariama White Hammond, who addressed and pumped up the attendees.

For the next hour and a half, a variety of speakers addressed the protesters behind a massive screen, amplified by a network of loudspeakers.

Speakers included members of Native American groups, representatives of the National Association for the Advancement of Colored People (NAACP), the American Civil Liberties Union (ACLU) and elected officials, including Boston Mayor Marty Walsh and the Democratic firebrand Senator Elizabeth Warren. Her presence was met with thunderous applause and screams from the crowd.

Throughout the speeches, the theme of revolution and Boston pride was prominent.

“This is where the American Revolution began. Right here,” boomed Senator Ed Markey.

At 1:30 p.m., the march began. The mass of demonstrators was herded out into the street by event leaders into a route planned by Boston Police that sent marchers in a snaking motion around the streets adjacent to the Boston Common.

For many of the marchers on hand, the demonstration’s purpose transcended women’s rights alone.

Aimee Ledwell, of Maynard, said that the “intersection of the many different issues represented here today is important to understand. There’s certainly a solidarity and a unity here for all sorts of different people whose rights may be threatened by this administration.”

“I don’t think there’s one issue represented here that’s any more important than another,” she said.

Ledwell said that seeing such large and diverse outpouring of support for progressive issues made her feel “less alone.” She viewed the march as a good opportunity for people to collectively start to heal after a particularly emotional election.

Many saw the march as a statement, if not an act of defiance, against the newly inaugurated President Donald J. Trump.

“[The administration] will have to answer to us with the decisions they make,” said Jennifer Glynn, of Milford.

Others were more specific on taking a stance against Trump.

“I think that we need to be as visible and vocal and united as possible against President Trump’s agenda,” said Massachusetts resident Daniel Ritchie, who expressed his concerns for women’s rights, the environment, racial equality and LGBTQ equality.

Sheri Bernhardt, of Medfield, wanted to state her intentions loud and clear.

“A strong voice that our voice can be heard and they won’t forget us, even though we won a majority of the vote,” she said.

Just 20 minutes from the University of Massachusetts Amherst, some 3,000 women, men and children gathered for a sister march in downtown Northampton, the Daily Hampshire Gazette reported. The Women’s March began at Sheldon Field and continued to Pulaski Park in the heart of the city. Before the march, people gathered at the Unitarian Society on Main Street to watch live streams of marches across the country.

Following the march, protesters rallied at Pulaski Park. Myra Lam of the American Friends Service Committee was the master of ceremonies. Speakers included Mary Ford, who was elected the first woman mayor of Northampton in 1992. Lifetime activist Frances Crowe spoke, as did Diana Sierra from the Pioneer Valley Workers Center. Climate activist Marty Nathan closed out the rally.

By Morgan Hughes and Elissa Borden

About an hour before the Rhode Island Women’s Solidarity March was expected to start, a woman with a bundle of heart-shaped balloons handed out markers and papers to people on the hill beside the South Lawn stairs of the Statehouse. Behind her, a collage of small posters beginning with “We Love…” sat between two banners reading “Not because we lost… Because we love.”

Kim Jodin of East Greenwich, R.I., explained as she untangled the bundle of balloons that her goal was to bring a bit of positivity to all of the negative emotions surrounding President Donald Trump’s inauguration Friday.

She pointed out that many of the signs at anti-Trump protests tend to express anger.

“Underneath anger is fear,” Jodin said. “But people can’t hear anger. If we show our fear, our fear about losing the things we love, I think our message will get through better.”

Stephen Belaus, of Narragansett, R.I., held a sign that read “Father for Daughter’s Rights.” People standing near him and passing by stopped to take photos.

Though many with cisgender and racial identities similar to his were reported to have elected President Trump, Belaus notes he does not jive with that status quo.

“As a 59-year-old white male living in Rhode Island, I see nothing that lines up with my core values in the Republican party,” he said.

Belaus explained that he was at the march to show people that as a person in a position of privilege and power because of his identity, he would not be complacent amidst the misogynistic rhetoric that became a part of Trump’s presidential campaign. As an ally and protector for his daughter and women like her, he is not afraid to be vocal in standing up to his peers using similarly discriminatory rhetoric.

“It’s any man’s obligation to raise their sons respectfully,” he said. “My father raised me to respect women, and I think a lot of people in this country don’t respect women the way they should.”

“You have to tell them what you think … and you don’t have to go along with it anymore,” he added.

Rhode Island resident Helena Barley, 25, held a sign that read on one side “Pence Wants Me Dead,” referring to Vice President Mike Pence’s recorded comments on conversion therapy for attempting to “cure” homosexuality.

Speakers at the Rhode Island event began with Governor Gina Raimondo, and included representatives from Planned Parenthood along with other activist groups.