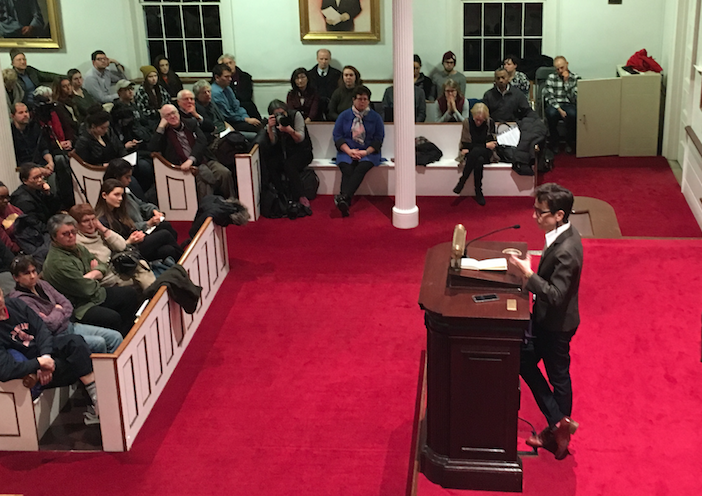 AMHERST — Russian-American journalist and author Masha Gessen spoke to a large crowd assembled in Johnson Chapel at Amherst College on Thursday night. She touched on similarities between the actions of Russian President Vladimir Putin and United States President Donald Trump, though she does not believe a substantive connection exists between the two.

The event, titled, “The Trump-Putin Connect: What We Imagine and Why,” was scheduled to take place in the Cole Assembly Room in Converse Hall, but had to be moved to a larger venue when an over-sized crowd began to exceed the room’s seating capacity.

Gessen is an outspoken critic of Putin and is “widely regarded as Russia’s leading LGBTQ activist,” according to Cathrine Epstein, dean of faculty and event organizer at Amherst College.

Born in Moscow during the reign of the Soviet Union, Gessen fled to the United States as a teenager due to her marginalized status as both an Ashkenazi Jew and an openly gay woman.

Gessen considers herself a refugee and opened her remarks with an expression of solidarity for other refugee people today.

“I came to this country as a refugee, although my situation was much less dire than most of the refugees today,” Gessen said. “I can only feel a little bit of their heartbreak … but I know what it’s like to have your future ripped away from you.”

When the Soviet Union collapsed in 1989, Gessen returned to Moscow. She hoped to take part in the transformation of her country.

She was a co-founder of post-Soviet Russia’s first weekly magazine, Itogi. As a journalist and LGBTQ activist, Gessen witnessed the rise of Putin first hand, culminating in the publishing of her first book, “The Man Without a Face: The Unlikely Rise of Vladimir Putin.” The book is an acclaimed best-seller considered to be amongst the definitive works on the subject.

In 2013, Gessen fled Russia once again due to the hostile atmosphere surrounding journalism, as well as the country’s staunch anti-gay laws that threatened her family. The mother of adopted children, Gessen feared the Russian government would take her children away from her because of her identity.

Gessen lives in New York with her wife and children. She publishes regularly in The New York Times, The New Yorker, Harper’s, the Washington Post, Vanity Fair and Slate.

While Gessen spoke on a variety of subjects Thursday night, the primary focus of her lecture was the similarities she sees between Putin and Trump.

She prefaced this portion of her remarks by saying that she thinks Putin and Trump are “very, very different people.”

Gessen was also dismissive of the idea that Trump is Putin’s “puppet,” or that there is any substantive connection between the Trump administration and Moscow.

She called such claims an, “exercise in conspiracy thinking, which can sometimes be comforting.”

While Gessen did not dispute that the hacking of the Democratic National Committee was perpetrated by Russians, she said that the idea that Russia decided the U.S. election requires a “big leap in logic.” She said she doesn’t find dwelling on the hacks to be “particularly useful,” and pointed out that blaming Russia and claiming that Trump “wasn’t elected by the people of this country is easier to take.”

However, Gessen does think that Trump’s “admiration for Putin is genuine,” and considers both leaders to be “autocrats,” leaders who seek absolute power and total obedience.

Gessen has identified nine traits she’s observed in Trump that, “those of us who have lived in Russia have also observed [in Putin] that I think might be useful” for Americans to consider.

Gessen discussed these binding traits in a well-read article, “Autocracy: Rules for Survival,” published in the New York Review of Books two days after Trump’s victory.

The first of these similarities Gessen discussed in her lecture Thursday night was the way Putin and Trump use language, “the way they lie,” she said bluntly.

According to Gessen, the two leaders “don’t lie for the same reasons most people do.”

“Most people lie because they want someone to believe what they are saying … When it comes to Trump and Putin, they are asserting their right to say whatever the hell they want,” said Gessen. “It’s a classic bully tactic … What are you going to do about it? It’s about power.”

Gessen believes this kind of lying by leaders “requires something different from the media. Fact checking is not enough … we need to analyze and expose how he uses his lies.”

Trump and Putin also both have a similar way of “seeing their reality through the media around them,” Gessen said. Both leaders are known to watch a lot of television.

“Putin watches ‘Putin TV.’ He tells a lie one night, watches himself on ‘Putin TV’ the next morning, and believes himself all the more. Trump has — amazingly — reproduced that same effect without state TV. They both live in a reality of their own making,” she said.

Gessen believes both leaders are also practitioners of something she calls “government by gesture.” She cited Trump’s deal with Carrier, a company that manufactures air conditioners based in Indiana, as an example of this behavior. Not only did Trump fudge the number of jobs he ostensibly saved, according to Gessen, but the entire ordeal was nothing more than a charade. She believes these kinds of gestures are characteristic of any autocrat, and she has observed them time and time again while covering Putin.

Gessen also said during her lecture that both Putin and Trump have “interests, but not priorities.”

“These men have no attention span … their main interest is appearing powerful,” said Gessen. “This explains why Trump loves generals. He’s infatuated with the military. But there’s a lot of important areas of government he is bored with.”

Gessen said she believes this boredom with real policy is dangerous because it allows “people around him, in different agencies, to pursue their own personal agenda. They file ‘good’ reports about their work to appease the boss, but the ruler’s neglect allows them to operate without much accountability.”

The last trait Gessen believes Trump and Putin share is a “disdain” for government, moral authority and the public sphere. “This disdain is not only shared by Putin but by any autocrat,” she said.

“An autocrats disdain for government institutions comes from a yearning for total power,” Gessen said. “They want to be the boss.”

The power of other agencies and institutions, such as Congress or the Supreme Court, undermines their total authority, Gessen explained.

“Perhaps that’s why every person [Trump] picked for his cabinet is opposed to the mission that that agency is supposed to carry out,” Gessen said, drawing laughter from the crowd.

Gessen said that autocrats have disdain for moral authority because “it’s the one thing they’ll never, ever have, no matter what.”

She believes this explains Trump’s attacks on Congressman John Lewis and Khazir Khan, a Muslim father who lost his son in the Iraq war.

“He bypasses traditional media by being so active on Twitter. He wants to control the narrative, and gets upset when he can’t,” she said.

Gessen urged the crowd to be wary of normalizing Trump’s presidency after the initial shock begins to wear off.

“Some normalization is inevitable … But I think in the next few weeks after he finishes signing his decrees, there will be a lull. And this lull contains dangers,” said Gessen. “We will wake up someday soon, the sun will have risen, the children will have gone off to school, we’ll still be in possession of two arms and two legs, and it will feel like ‘oh, maybe it’s not so bad after all.'”

“I’ve had many days like those in Russia. And that’s when the normalization sets in. But weeks, months, years down the road, the full impact will be felt,” Gessen said.