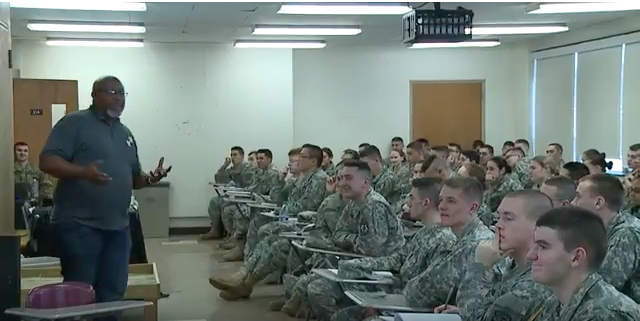 AMHERST — The UMass ROTC Minuteman Battalion saw a new light shined on the growing battleground of cyberspace. Andre Golden, a force integration specialist of the U.S. Army’s new cyber division spoke to over 90 cadets at the event over the weekend.

Golden highlighted the ranks, positions and requirements for being a part of the cyber division. Interest in the subject of computers is a must, he said.

“You have to actually like messing with computers. Both hardware, both software,” said Golden. He went on to cite a few examples of recent incidents in the new field.

Golden spoke of cyberattacks on Iran which set nuclear research back a few years. He also mentioned that the U.S. managed to shut down all of North Korea’s internet four years ago.

The cyber battleground, Golden explained, goes both ways. Cadets were reminded of the 2016 election hacks, allegedly perpetrated by the Russian government, highlighting the U.S.’s vulnerability in cyberspace.

Although the program is looking to grow its staff, they won’t take just anyone with an interest in computers. They want the best and the brightest in the country. Jobs could vary from IT personnel to hackers and coders.

“You have to be in the top tier of not only your class, but the entire country,” Golden said.

Golden also stressed the high security level of working in cyber. Applicants for jobs in the field have to pass rigorous background checks and pass a lie detector test. The polygraph was added recently because of Edward Snowden and Chelsea Manning.

Interest among the crowd varied. Many of the younger cadets were very unsure of what they wanted to do. The older members had already planned out or picked other paths.

Golden described that interests in cyber warfare and security belong to a niche community. He explained that the crowd for his talk at UMass was larger than others.

One cadet, John Geenty, expressed heavy interest in the field of cyber warfare.

“I’ve been a computer science major for two years, I’ve been programming for two years, and I love cyber,” Geenty said. “I really got into it, I had a professor that recommended me for research here. I’m studying to my honors thesis in computer security and networking.”

The cyber security branch of the U.S. Army was created in 2014, and continues to develop.