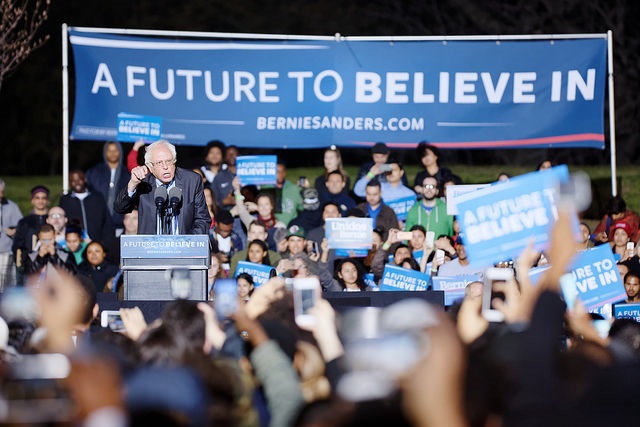 This time last year, I was up in different little towns of New Hampshire during a cold, snowy winter.

Kurt Vile’s “Pretty Pimpin” felt like it was on constant repeat playing out the radio speakers.

One night, I was sleeping on a small couch as a guest in a rustic home in Salem that belonged to an adorable older couple. As I relaxed on the couch ready to fall asleep at any moment, I was surrounded by two friends I had met only months before. We were preparing to wake up at 5 a.m. to hang pamphlets on the doors of New Hampshire natives for Get Out the Vote (GOTV).

This time last year, I was interning for Senator Bernie Sanders’ presidential campaign for one of the earliest primary voting states. When Sanders won that night, all I can remember is the energy inside the Concord High School where he addressed the crowd to celebrate our victory.

But here we are a year later.

We all know how the election turned out.

Nov. 8, 2016 was a day I will not forget, just like the three days I worked on the Sanders campaign in New Hampshire. I saw all the hard work field organizers, interns and other staffers put into securing Sanders’ win in the state.

When I tell you that I met some of the hardest working, most determined people in my entire life, it is not meant to be hyperbolic whatsoever. These organizers were relentless in their pursuit of making the dream of a political revolution to a reality.

And they still are.

While interning for a month leading up to the New Hampshire primary Feb. 9, I called hundreds of people almost every day from all across the country — from Hawaii to Nevada — to make the trip from their home state all the way to New Hampshire.

These volunteers were your everyday American people. Many put their entire lives on pause to work for Sanders. I was just lucky enough to experience the magic for about a month.

On election night, my friends and I ordered a pizza while I was waiting for my boyfriend to arrive by bus from Boston. We all huddled around the television waiting for the results to come in. That night I stayed up until the end. I stayed up until I saw Republican candidate Donald Trump give his victory speech. It all felt so surreal.

At this point everyone else was asleep, or they left once Trump had started winning more and more states. But this was history I thought, and I needed to soak up every second of it. I had to watch.

The next day felt heavy. I ran into one of my good friends whose father I know is a Trump supporter. This openly disappointed her in many different ways. We said nothing and hugged one another instead.

But of course I was not the only one who felt this way. For many people their original thought was, “How could this have happened?”

I would be lying if I said I didn’t think that at first, too. I was in shock. This denial of the results was a privilege to think in itself.

While some Americans seemed to just be learning how racist, sexist and xenophobic the country really was, others had been living that experience for a long time.

Questioning how people can elect a man who ran a presidential campaign dividing people, calling Mexicans rapists, mocking a disabled reporter, and who was caught on tape saying degrading, completely sexist things about women, in a country that was founded on the ideas of dividing people by race, gender, socioeconomic status, etc. It is not a mystery at all.

Today the political division in our country is more obvious than it has been in years. Everyday my phone buzzes with some update from some news organization, always something about our new president, that makes this all seem like a well done episode of Black Mirror.

Except it is terrible for all of us.

Recently I saw Russian-American Journalist Masha Gessen speak at Amherst College about the similarities she sees between Trump and Russian President Vladimir Putin. She said these men live in their own realities they create by controlling the media they consume and by ignoring all other outlets they disagree with.

As a graduating journalism student, it has been hard watching Trump attack the media so harshly and without any credible reason.

A man who fires off tweets yelling, “FAKE NEWS” to any journalist or news organization who simply is reporting the facts, (yes, real facts — journalists have no interest in “alternative facts”) has no real understanding of what journalism is and should be.

We now have a president who tweets as his form of communication to the public. How is this not an episode of Black Mirror yet?

While sitting in the beautiful chapel at Amherst College, in a room filled with faces listening eagerly to how one horrible man relates to another horrible man, I wondered how the people here would be affected by Trump’s administration.

I saw a lot of older white faces, and figured not many. It feels weird discussing systematic oppression within academic settings sometimes. We are only discussing, learning or critical thinking, while people are out there experiencing it every day of their lives.

We must not forget this. Especially those of us who are writing these people’s stories.

Identities are important. Understanding who we are and how different identities intersect with each other is important.

We are the books we read, the neighborhoods we grew up in, the information we digest, and the people we surround ourselves with.

This is something I learned from working on Sander’s campaign. Make friends you want to change the world with.

Last April I traveled down to Washington D.C. to cover a large protest. One person on the bus handed my boyfriend and me a magazine. There was one blue page with white writing that read, “To change anything, start everywhere.”

The page now hangs taped up on my bedroom wall. A resistance takes many forms. The self can be a good place to start.