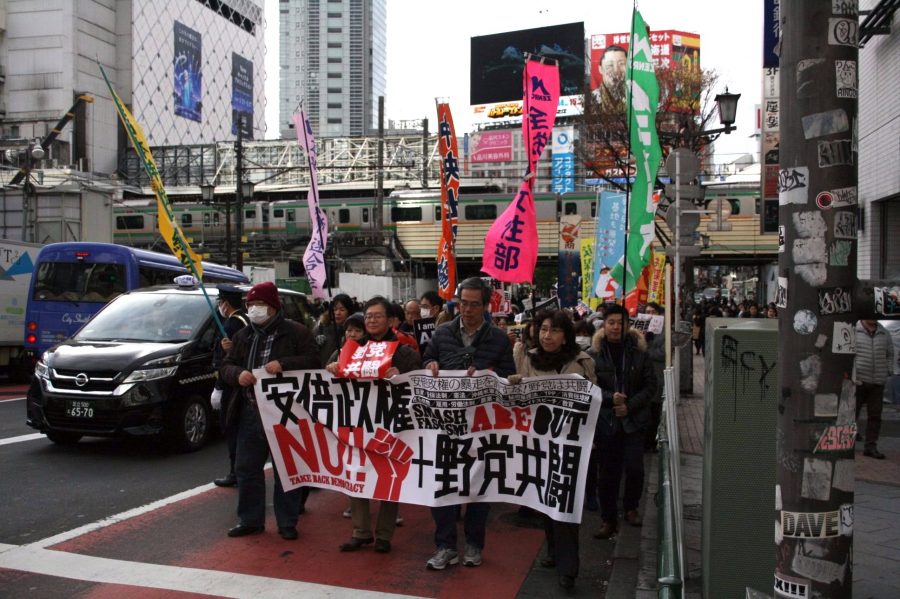 TOKYO — On Jan. 14, 2017, a protest against Japanese Prime Minister Shinzo Abe took place in the Shibuya ward of Tokyo. Police guarded a single lane of traffic to support the hundreds who marched through the downtown metropolitan chanting and holding signs comparing his government practice to fascism.

Signs reading “2031 people dead in Fukushima,” “Smash Fascism,” and “I am not Abe,” complemented chants, which included phrases like “Don’t restart nuclear reactors,” and “Don’t dispatch the Self-Defense Forces overseas.”

The Fukushima nuclear reactor meltdown resulting from the March 11, 2011, 9.0 magnitude earthquake was one of the main motivators behind the protest. Abe’s handling of the situation has been a sore spot for many Japanese citizens, citing the homelessness of many from the impacted areas years after the disaster, and his recent quote stating Japan needs nuclear power to stop being dependent on foreign energy, as key issues.

While on a much smaller scale, parallels to the heavily covered protests across the United States can be drawn. Think back to the heavily covered Women’s March fighting against President Donald Trump’s racist, sexist, homophobic and nationalistic rhetoric, or the grassroots protests erupting weekly or the social media backlash following January’s inauguration.

Even Japan, a country known for being so inclusive to offbeat and quirky personalities, has an arguably nationalistic leader, with a disdain for those who aren’t entirely Japanese. You’d think a country that embraces trends like maid cafes or anime girls dancing in kawaii outfits who look like they were made at Party City would have a more liberal mindset.

Long story short, nationalism is on the rise all across the globe. Maybe it’s because the Greatest Generation isn’t around to warn us of what started both of the world wars (hint: it was nationalism) but history is repeating itself. But even in the wake of these events, it is refreshing to see people in a completely different country using their voices in a helpful, productive way to create change.