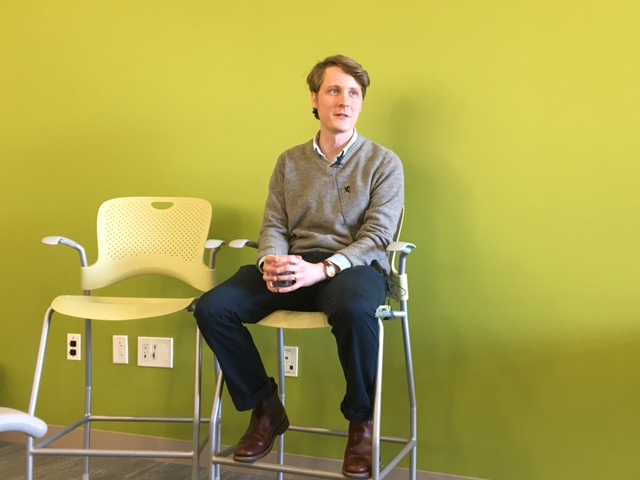 AMHERST — Reporter at NJ.com and University of Massachusetts Amherst journalism alum S.P. Sullivan spoke to a group of journalism students about ethical coverage of his recent piece on sexual assault inside a New Jersey prison.

The piece told the story of a group of female inmates at Edna Mahan Correctional Facility in Hunterdon County, New Jersey who were sexually assaulted by a correctional officer.

Sullivan explained he spent six months digging up court documents and public records, tracking down women involved in the sexual assault allegations and jumping through hoops to get interview time with the women while they were in prison.

He said that he feels reporting on sexual assault is “very fraught.” He took care in upholding a strong set of moral and journalistic ethics, especially in asking for consent to name the victims of sexual assault.

Sullivan said he remained completely transparent in his correspondence with the inmates, letting them know exactly what he knew, how he knew it and what his intention was with the information. He said that one of the older inmates was skeptical about what he was doing. She pinpointed a line in Sullivan’s letter to her.

“I plan to be fair with both sides,” Sullivan said he wrote in the letter.

When questioned about the meaning behind this, Sullivan explained he was planning on giving both parties fair and equal coverage to explain their sides of the story.

“I tried to be pretty frank [to the inmates] about what I knew, how I knew it and how I planned to treat it,” Sullivan said.

He explained to young journalists in the room that it was important to be “up front with the people who usually don’t deal with the media,” because they sometimes do not understand the ethics and guidelines by which journalists find, name, interview and publish their sources.

Sullivan’s greatest struggle was dealing with how to fairly cover each inmate due to the already lingering stigma behind sexual abuse. It was especially difficult given that the women were incarcerated for serious crimes. He also faced the challenge of giving the correctional officer accused of sexual assault a fair chance to defend himself in his article, as ethical journalism demands. The officer declined an interview, so Sullivan had to use third-person information to balance the story.

Sullivan also commented on the difficulty of conducting an interview that required tough and potentially uncomfortable questions about a sensitive topic, all the while respecting the space of inmates.

He said it is important to remember that everyone is human.

“In dealing with interviews, it is important to embrace your empathy,” said Sullivan.

After opening the floor to questions to UMass journalism students, Sullivan addressed a question from editor-in-chief of The Massachusetts Daily Collegian Robert Rigo about using the term “survivor” over “victim” when covering sexual assault cases. He said that, to him, the women’s identities as people are more important than their positions as victims or survivors.

To round off his presentation and the discussion about covering prisons and sexual assault, tactics for investigative journalism and skillful interviewing, Sullivan gave a final remark that summed up his unique experience covering the emotional story of the inmates, as well as the field of journalism as a whole.

“If you’re not nervous, you don’t belong in this job,” Sullivan said.