Ellison, McGovern discuss future of progressivism and the Democratic Party 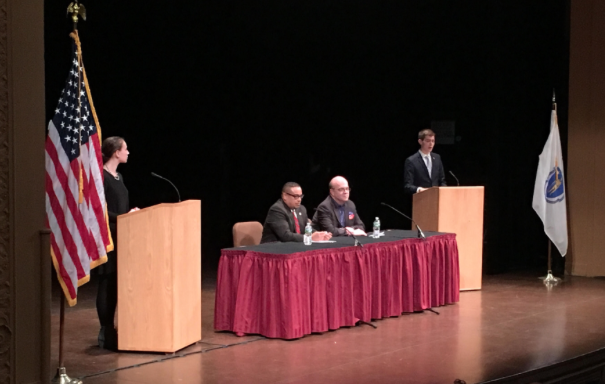 The event took place in a packed Bowker Auditorium and was hosted by Progressive Democrats of America in partnership with UMass Progressives and UMass Democrats.

Ellison narrowly lost a contentious race for chair of the DNC to former labor secretary Tom Perez in February. Ellison had been endorsed by former presidential candidate Sen. Bernie Sanders (I-Vt.), and the race was seen by many as battle between the party’s more centrist, establishment wing and the more liberal, progressive one.

Ellison stressed to the crowd at UMass that while there may be ideological differences within the party, unity is crucial for Democrats to successfully resist the Trump administration’s agenda.

“Tom [Perez] asked me to be deputy chair and I said sure, because disunity could kill us … We got to come together,” Ellison said. “We have got to have tolerance for different points of view and try to find common ground. We have got to seek to understand each other, is that cool? We got to be smart, unified and active.”

After being asked what he would say to those who feel disenfranchised from the Democratic Party, Ellison said “I hear you, I really do. But what I would say is, you got to give Tom Perez a chance. To all those who feel the way my friend here does, I’d say give him a chance.”

Ellison also said that “the Democratic Party is made up of people, and if you engage it you can steer it to the direction you want it to go in.” He added that older members of the party should welcome and listen to younger members because “a lot has changed for young people over time,” citing the difficulty many millennials face find a job and dealing with student debt after graduating college.

Ellison acknowledged however, that if the Democratic Party is too resistant to the progressive wing, it could lose substantial support to third party movements in the future.

“I don’t think the energy in this room would dissipate, but it could migrate … There are third party movements looking to soak some of that energy up. But we can change that if we can carry the progressive agenda,” Ellison said.

McGovern also had some criticism for the party’s establishment.

“It’s easy to be against things, but it’s more important for us to be for things. We need to tell people what we’re for. We need to be more forward thinking, more progressive, more enlightened,” McGovern said.

Both men also discussed their support for getting big money out of politics and reforming the campaign finance system, saying that money in politics has a “corrosive” effect.

Even though the Republican Party currently controls the house, senate and presidency, both Ellison and McGovern said that they remain hopeful for the future of progressive politics.

“I see every reason to be hopeful, even though it feels like we’re all in a collective nightmare,” Ellison said. “This is a tough time for America, but it doesn’t have to stay that way.”

He added that the response to Trump’s election has been what amounts to a “renaissance of democracy in America.”

“There’s a spirit going around all over the country. You can feel it in this room. You could feel it at the women’s marches. Maybe some of you felt it the airport protests. I can feel it growing,” Ellison said.

McGovern said that “I go to work every day and I’m horrified. But I’m determined to fight as hard as I can,” adding that seeing so many people at the event “gives me hope we’re going to get through this.”

Both congressmen said that resisting the Republican agenda has to start at the grassroots level.

“The reason why I ran for DNC chair was to help infuse that institution with a spirit of activism,” Ellison said. “It starts with building progressive infrastructure. That takes hard work, it’s not glamorous. Knocking on doors, making calls, organizing, those are the things that are crucial …We’ve got to take that street energy we’re seeing and move it to the ballot box.”

McGovern agreed, adding that the thousands of phone calls made to members of congress were crucial in killing the Republican health care legislation.

“The reality is, it was you who killed that bill. It was all of you who made phone calls and wrote your congressmen,” McGovern said.

Both congressman stressed the importance of organizing against the Trump administration’s agenda, arguing that Trump represents a threat to basic American values.

“I actually lose sleep at night thinking about [Trump’s] erratic and wacky behavior. This is not normal,” McGovern said.

“Liberal democracy is under threat …We’re not just facing a bad president were facing an existential threat to our system … we have a president who is openly saying that we should ban people based on religion,” Ellison said. “A president who’s openly misogynistic. These kinds of things are fundamentally un-American. Trump is not just a bad president, he is a threat to the republic.”

Ellison added that he is disturbed about Trump’s attacks on the press.

“We’re politicians, we understand that the press can be frustrating to deal with sometimes. But you have to understand that a free press is vital to a democracy. He’s not just attacking the press, he’s attacking your right to know,” he said.

Ellison said that because of these threats, “this is a crucial, patriotic moment to step up.”

“This country’s worth it. Over the course of time … we have prevailed over the ugly past. And now after all we’ve fought for, we’re going to give it on back to the likes of a Trump? Were not doing that,” Ellison said.

“Years from now, our children and our grandchildren are going to ask, ‘What did you do during this crucial period?’ I want to say that I fought like hell,” he said.