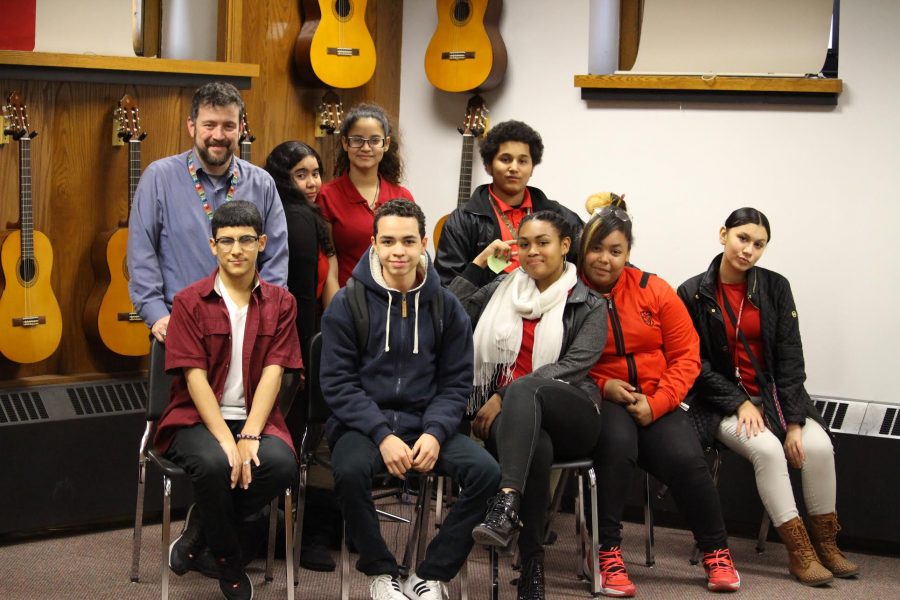 SPRINGFIELD — Students at the High School of Commerce in Springfield are embracing the school’s creativity mantra. Among the school’s arts and performance programs are the Madrigal Singers choral ensemble, student-oriented sculptures classes, a myriad of clubs and even a journalism program.

The school is a hotbed for creativity and self-expression, students say. The school boasts several arts and performance-based clubs, along with various elective courses. A journalism program in partnership with the University of Massachusetts Amherst and an art program have given students unique opportunities.

Brian Damboise, who has taught at the school for five years, supervises the school’s journalism program in partnership with UMass professor Nicholas McBride. Students in the class are mentored by undergraduate journalism students and encouraged to think critically about the world. They gain proficiency in journalism along the way.

Hector Lopez, a student in Damboise’s journalism program, spoke on what the initiative means to him.

“Throughout high school, if you asked me, ‘Hey, do you want to take journalism?’ I most likely would’ve turned it down,” said Lopez. “But I’ve met good people. Mr. Damboise is such a good teacher … You get to know information that you wouldn’t be able to get anywhere else. I like journalism. Maybe it’s something I might pursue after high school.”

The art programs foster student creativity and a firm sense of community. Further, a 2014 President’s Committee essay for the National Endowment for the Arts reported that those “involved in arts education for at least nine hours a week [are also] four times more likely to be recognized for academic achievement and three times more likely to have high attendance.”

“I see our arts program as invaluable,” said Murray. “Students within our demographic have major vulnerabilities … In my art room, I witness students learning to break the barrier of fear and vulnerability.”

Their growth in the classroom has been exponential, Murray says.

“Art is a performance and many come into my art class terrified to create in front of others,” said Murray. “Within the first few weeks, students are encouraging one another and bragging about their friends’ artwork to students in the hallways. [They’re] encouraged to keep going and share everything they create.”

This creative community is fostered through University of Massachusetts Amherst alumnus Ramsey Kurdi. Kurdi is the director of The Madrigal Singers, an audition-based choral ensemble at the High School of Commerce. Kurdi guides the group through discipline and humor alike.

Kurdi has worked at the High School of Commerce in Springfield for five years.

“I’m addicted to eureka moments, my own and my students,” Kurdi said.

“He gets the job done,” said Jamal Long, a Madrigal Singers member. “He’s playful and cheerful, but when it comes to business, he’s always on top of everything.”

Long says Kurdi is an inspiration to the group’s members, citing his understanding and investment in his students even above his teaching methods.

“He’ll defend somebody, or try to protect them from something bad,” Cruz said. “He’s always there. That’s why me and him, our friendship is so strong.”