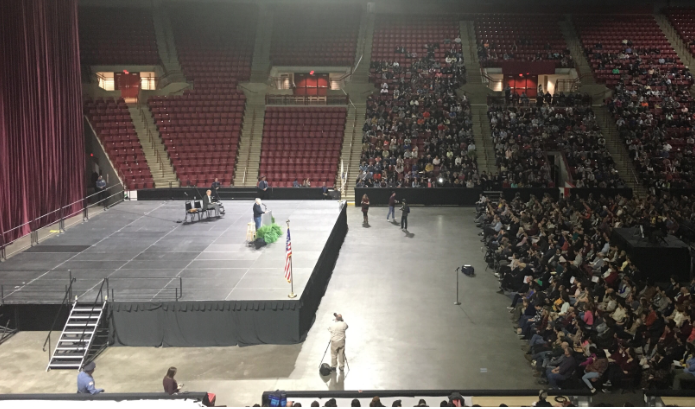 AMHERST — Noam Chomsky, “arguably the most important intellectual alive,” according to the New York Times, spoke at the University of Massachusetts Amherst last week.

Chomsky, a renowned linguist and intellectual, gave a lecture titled, “Prospects For Survival” to a crowd of several thousand people at the Mullins Center.

Chomsky is a professor emeritus at the Massachusetts Institute of Technology (MIT), where he has worked since 1955. The 88-year-old professor has authored over 100 books on various subjects ranging from linguistic theory to cognitive psychology to international relations and politics.

Chomsky is widely regarded as one of the most influential political dissidents in America for his vehement criticism of the American political system and interventionist foreign policy.

In his lecture at UMass, Chomsky focused on two issues he views as “existential threats” to human civilization: climate change and the prospect of nuclear disaster.

He framed his discussion of these issues around a question that biologist Ernst Mayer posed regarding the evolutionary benefits of a species’ intelligence. The crux of the question, Chomsky said, is whether or not “it’s better to be smart than stupid.”

Chomsky contends that our own intelligence could be our undoing, as we’ve created technologies such as nuclear weapons and fossil fuel-emitting machines that could destroy humanity.

“We have a choice,” Chomsky said. “We can prove that it is better to be smart than stupid … the prospect of a decent survival is at stake.”

After discussing the history of nuclear weapons and the cold war, Chomsky concluded that it is “a near miracle that we’ve escaped [nuclear disaster] thus far.”

Chomsky cited that the Bulletin of Atomic Scientists recently moved their famous “doomsday clock” to the closest it’s ever been to “midnight,” since 1953, when the U.S. and the U.S.S.R. both tested hydrogen bombs for the first time.

Chomsky said that after studying the history of nuclear weapons over the years, he believes states such as the U.S. often prioritize the political “security of the state” over the “security of the people.” This leads the government to risky decisions that make the prospect of nuclear disaster more likely.

“There’s a lot of talk about security, but it’s never about real security, it’s about the security of power,” Chomsky said.

The MIT professor said he fears the increased tensions between the U.S. and Russia could ultimately lead to the use of nuclear weapons. These tensions, Chomsky argued, stem from the expansion of the North Atlantic Treaty Organization (NATO) towards the Russian border, and the expansion and modernization the U.S. nuclear arsenal started under President Obama and continued under President Trump.

Chomsky said that the expansion of NATO into countries that border Russia, such as Ukraine, “is a policy mistake of epic proportions.”

He also said that Russia sees the imbalance in nuclear power, brought about by American nuclear expansion, as a “first strike” threat, meaning that the U.S. could conceivably destroy Russian nuclear capabilities by striking first. Chomsky argued that because Russia feels threatened by these developments, they could strike first in turn, which would be “an act that would end organized human life,” he said.

Chomsky lamented the lack of serious media coverage on this issue, saying that the possibility of nuclear disaster “barely registers in the information system … it receives hardly any attention outside some specialized circles.”

Chomsky recalled how he felt the day the United States dropped an atomic bomb on Hiroshima, Japan in 1945, and how it has informed his views on humanity ever since.

“I can recall my own feelings on that August 6, the astonishment that so few people seemed to care that we were entering what may be the final human age: the nuclear age.”

Chomsky then asked the crowd once more: “Is it better to be smart than stupid?”

The professor also extensively discussed the threat that climate change poses to human civilization throughout his lecture.

He said that climate change may be an even greater threat to humanity than nuclear weapons because of the irreversible nature of the issue.

Chomsky said that while we could conceivably agree to get rid of nuclear weapons, “we may be passing a point of no return” with climate change.

Throughout his lecture, Chomsky was critical of the Republican Party’s stance on climate change, especially after the election of President Donald Trump.

“The U.S. is virtually alone in racing towards destruction,” Chomsky said. “And doing so enthusiastically.”

“You can either toe the corporate line or you’re out,” Chomsky said, criticizing the Supreme Court’s decision in the Citizens United case, which Chomsky said “allows unlimited corporate money to flow into the political system.”

According to Chomsky, the rest of the world’s major countries, including China, were willing to pass a binding agreement to reduce carbon dioxide emissions as part of the 2015 Paris climate agreement. But there was an obstacle.

“It couldn’t be done because of one obstacle: the Republican Party,” Chomsky said.

“The budget itself is of unusual savagery, even for the Paul Ryan faction which is running the show behind the scenes while Trump and Spicer grab the headlines,” Chomsky said.

Chomsky ultimately pondered whether or not “civilization can survive when the richest and most powerful country in the world is racing towards the precipice of destruction.”

The professor said that although the present circumstances are bleak, he does believe there is hope.

“The costs of renewable energy is decreasing,” Chomsky said. “And there are ample opportunities, but they will require an enormous amount of energy … the federal government has been turned into a wrecking machine, but states and cities can still do a lot.”

Chomsky left the audience by asking the question again.

“Is it better to be smart than stupid? Like it or not, it’s up to you to answer, and our prospects for a decent survival depend on it.”