Land of the rising sun — and whacky potato chips 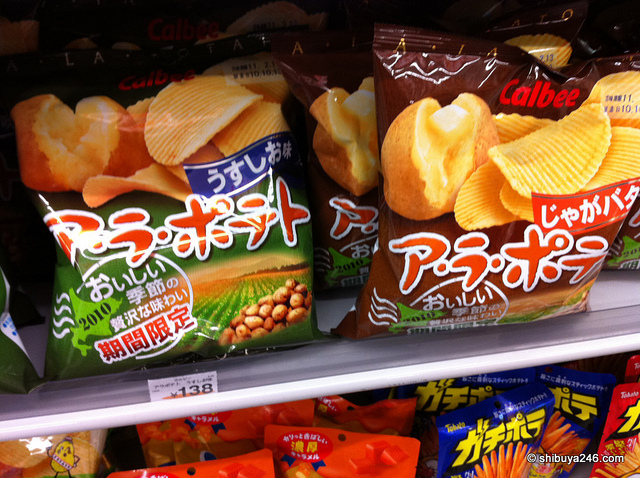 In the ever-continuing saga of Japan creating unnecessary things, Calbee, the most widespread Japanese potato chip manufacturer, has made a wet potato chip.

According to the Japan Times, the chip was actually pretty good for what sounds like a soggy potato. The organization explains the outside is moist and dewy while the inside maintains a traditional crunch.

Unfortunately, the company only offers its wet potato chips at Calbee Plus branches which are few and far between, but unusual potato chips aren’t hard to find. Walk into any Japanese 7-Eleven and you can find an array of obscure flavors.

It’s hard to truly to describe convenience store culture to someone who hasn’t visited Japan.  No where else is the world can a 7-Eleven mean more than feeling bad about yourself for getting a slushie and a terrible hot dog. The workers are truly dedicated to their jobs, there is almost always someone feather dusting and organizing the shelves. Every time a person walks, in they shout words of encouragement to their potential patrons. I’ve seen dirtier and less organized Pottery Barns.

Pizza chips
Just like 7-Eleven, American chains like Pizza Hut and Dominos are wildly popular in Japan. But unlike the U.S., they’re considered a luxury and usually only ordered for birthdays or going away parties. Japanese people also love obscure toppings. One particularly popular Pizza Hut option is the Idaho Special, which is just a cheese pizza topped with potatoes.

Calbee decided to stick with the classic, promising the taste of a thick slice of pepperoni pizza with hot and gooey cheese, next to a generic chip with shards of equally gooey cheese on top. Unfortunately, the cheese shards on the packaging didn’t translate to the actual thing.

Most chips had slight cheese dust on top with a singular piece of cold, processed cheese. With that being said, it did taste like cheese, almost like wavy Lay’s Potato Chips with Cheeto dust.

Matcha chips
Easily one of the best sounding chips, the bag shows matcha chocolate drizzled on top of each individual chip. Surprisingly, every chip in the bag actually had the same three or four stripes of matcha chocolate in almost the exact same spot on the packaging.

This feat alone solidified it as an amazing chip. Unfortunately the chocolate didn’t taste like actual chocolate, but like a sweet, green tea flavored glaze.

Fried pork chips
Tonkatsu, or panko breaded and fried pork, is an extremely popular Japanese dish often included in bento boxes or incorporated into completely different dishes like Katsudon, which is Tonkatsu cooked with egg and a sweet sauce served on rice.

The chips aren’t technically chips, but more like a pork rind. They, like many of the other chips, didn’t really taste like what they were advertising. It looked and tasted like they threw half a pack of pork ramen seasoning into a bag and shook it up. I’ll let you decide if that’s a good or a bad thing.

Looking past the bags unmet expectations, it was actually a nice snack. They have a soft texture and they do that thing Cheetos Puffs do when they melt on your tongue.

Dashi and soy sauce
This is the Japanese version of a salt and vinegar chip. Dashi is a broth commonly used for ramen, made by boiling dried kelp and bonito flakes, which are dried shavings of the bonito fish.

The chip itself tasted like salt, which I’m assuming is the soy sauce aspect of the name, and has a subtle fishy aftertaste. If you haven’t had bonito flakes before, I could only describe it as a very distinct fish flavor.

This was also one of the more aesthetically pleasing bags, with a subdued pink, which reminded me of cherry blossom season.

Which is the best Japanese potato chip? Of all of the choices, I’d have to give the potato chip crown to the dashi and soy sauce chip, since it had a unique flavor to my white bread palate, but wasn’t too much to handle.

Of all the crazy things the Japanese have managed to produce, nothing can really capture their spirit and love for the unnecessary like potato chips can.

Nowhere else in the world can you find such a variety of useless flavors and so many people willing to buy them. That spirit is what makes Japan so unique — just like its potato chips.