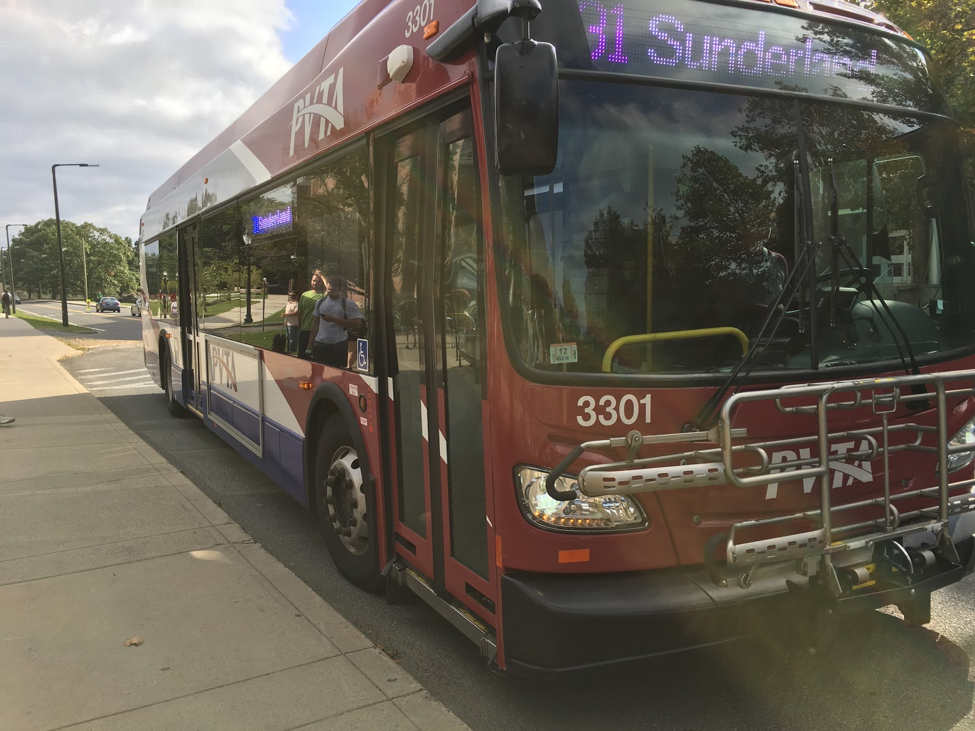 AMHERST — Despite a large budget cut that led to the cuts and eliminations of 16 bus routes, the Pioneer Valley Transit Authority (PVTA) is continuing a safety campaign to install new high-definition cameras and monitors on buses.

The PVTA cut or eliminated at least 16 bus routes this summer, pointing to the state’s fiscal 2018 budget which included a $1.2 million deficit for the transit authority. Capital funding, however, allowed the security upgrades to roll onward.

PVTA transit vehicles have been equipped with security cameras for the past 20 years. This year’s upgrade began as an initiative to better support complaints that the PVTA claims office receives.

“The goal is that these cameras will show a clearer picture if something were to happen on the bus,” said Glenn Barrington, general manager at UMass Amherst Transportation Services. “It would enable us to better handle a claim and make the bus system safer for our riders.”

According to the PVTA website, the administration cut or eliminated 16 bus routes, including the Tiger Trolley in South Hadley and the M40 Minuteman Express.

Springfield buses were the first to receive the new upgrade. Newer vehicles received their upgrades this summer, while many older buses are still waiting.

Monitors are located inside the cabin nearest the driver and they cycle through live feeds of cameras positioned around the entrances and walkways of each bus. The monitors serve as a reminder of surveillance to deter crime and to help commuters feel safe, officials say.

“Essentially, this new technology gives both the PVTA and our commuters the ability to have a proper view of what is happening on and off the bus,” said Barrington.

Upgrades to the security features on buses were planned before the state government released the drastically reduced 2018 budget, according to the Amherst Select Board Chair and PVTA Advisory Board Delegate for the town of Amherst Doug Slaughter.

The upgraded video systems are considered a capital cost, which has dedicated sources of federal funding that can only be used for expenditures dealing with the purchase and maintenance of buses and equipment. Upgraded security equipment on buses has also proven to be cost-effective for the PVTA according to Slaughter, where the cost of the monitoring systems has been regained by changes in other expenses.

“Some of the time, effort and insurance expenses that go along with running a bus system have been reduced as a result of having the monitoring systems,” Slaughter explained. “There are some offsets there from the standpoint of equipment cost and the change in expenses.”

Ultimately, the new monitoring systems on the PVTA buses are there to increase safety for its commuters and to make for a more efficient bus system, Slaughter said.

“You really do it because it makes the buses safer and helps run the operation better when you’re trying to move people around, whether it be for work or for school,” said Slaughter. “That’s the main goal.”

In response to concerns that UMass bus routes like the campus shuttles might be eliminated or reduced, Slaughter said that the PVTA may struggle to receive sufficient state funding in the future.

“We are going to be in a couple years of pretty serious tight budgets, in which we will have to be extremely careful with thinking of how we manage the revenue and expense side of the PVTA budget,” said Slaughter.

Officials have not yet responded to a request for the cost of the new video surveillance monitors.