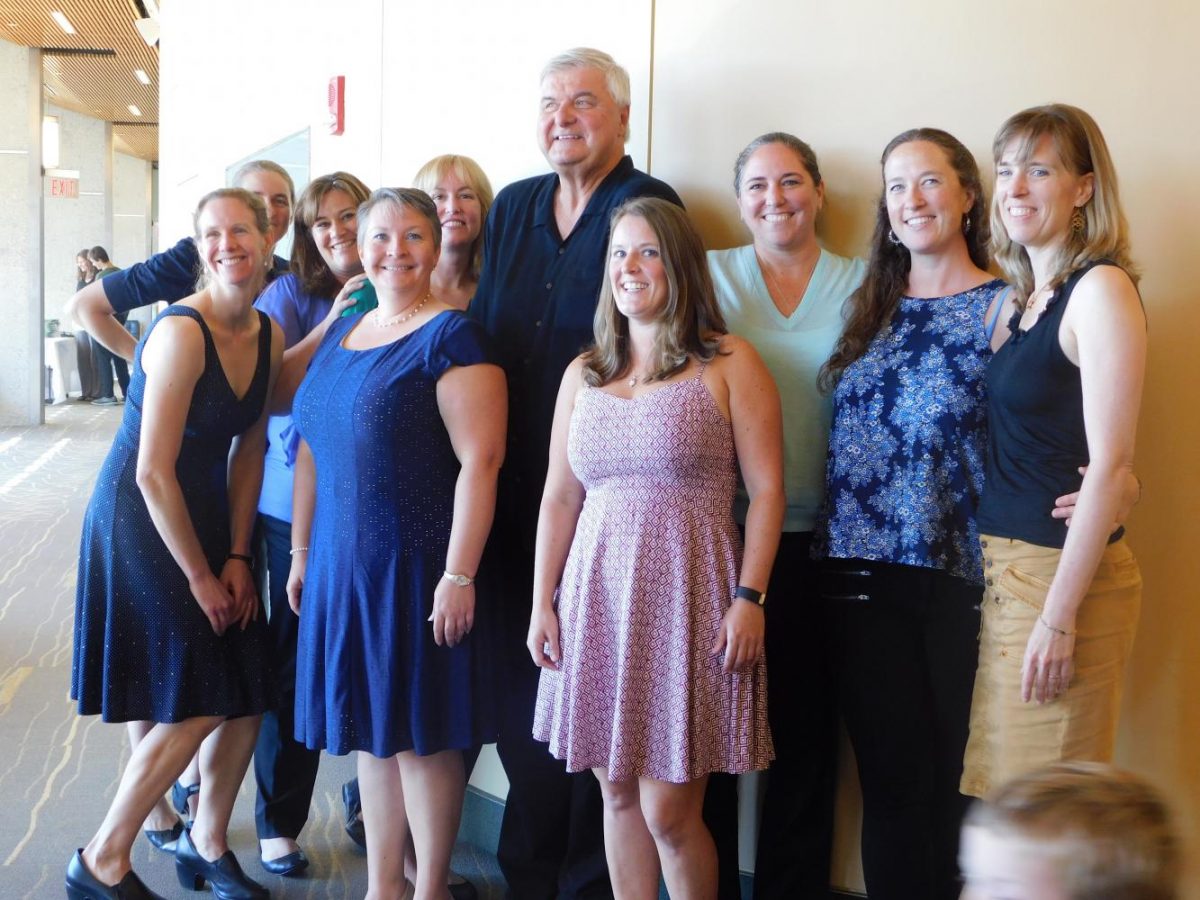 AMHERST- Nearly 25 years after they took the state by storm, the 1992-93 Amherst-Pelham Regional High School Lady Hurricanes Basketball team reunited over the weekend at the University of Massachusetts Hotel to be inducted into the ARHS Hall of Fame, along with the 1991-92 squad.

The team, which went 24-1 on their way to a MIAA Division 1 State Championship, were the stars of the novel, “In These Girls, Hope is a Muscle” by author and UMass Journalism professor Madeleine Blais. Team members and the coach spoke at the induction ceremony on the experience of becoming national figures, as well as what lessons they took with them into their professional lives.

The team reached international fame through Blais’s cover story for The New York Times Magazine, which she expanded into her book in 1995. It quickly became a national bestseller, as well as a finalist for the National Book Critics Circle Award for Nonfiction.

For many, it was one of the first time they saw young women portrayed as “sweaty,” with long ponytails and baggy uniforms.

“Many people were glad that the world had changed enough that that kind of image of women was being honored by an organization as patriarchal as The New York Times,” said Blais.

Blais recalled her first contact with the team during the summer of 1992, when a member of the team, Kristin Marvin, covered for Blais’s regular babysitter and ended up playing basketball with her then 10-year-old son.

“[My son] had that ‘Girls can’t do that’ look and she had that look on her face like ‘Girls can do that,’” said Blais.

Her conversation with Marvin about the team and the upcoming season left such an impression on Blais that she pitched the story to theThe New York Times.

This past July, Blais released an updated version of the book, which features an epilogue updating readers on where life has taken the players from the Lady Hurricanes. Some of the Lady Hurricanes became professional athletes, others became doctors, professors, business leaders and musicians.

“Someone once said ‘writers either write about the world as it is or the world as they wish it to be,’” said Blais, reading from the epilogue. “During a cold stretch in a dreary winter that might’ve otherwise been forgotten, anyone who had the chance to watch these young women play witnessed the world in reality and fantasy. They were one in the same. The truth really was the dream.”

Their coach, Ron Moyer, compared the season to a day where “everything seems to go your way,” but acknowledged there were bumps and obstacles along the way. However, he said he was always impressed that his team could “tear down any wall” that was put up in their way.

“This is not his-tory, this is her story,” said Moyer.

Moyer was raised by his older sister, which left him with an admiration for strong women, and a desire to help young women become stronger.

“When I look around and I talk to folks, [I know] I did my job,” said Moyer, telling stories of their practices and the lessons he and the team taught each other.

Marvin says that the lessons she learned from Moyer are dear to her, and she tries to instill them on both her coworkers, as well as her three daughters.

“So much of what I learned and so much of the experiences I had that year and the years leading up to the championship year, I realized has had such a huge impact on the rest of my life and how I live my life,” said Marvin.

Marvin said the leadership skills she learned as a member of the team carry on into her professional life, and she reminded the audience, especially young women, that they shouldn’t be ashamed of driving towards success.

“I got to be a part of a team of amazing young women who were both my teammates and my role models,” said Dr. Emily Jones, who described herself as “the youngster” of the Lady Hurricanes.

After the speeches, members of the team received commemorative ARHS Hall of Fame mementos, handed out by the current Amherst Regional High School Athletic Director, Rich Ferro, and invited them to head over to the high school to join in at the ribbon-cutting ceremony of the new gym.