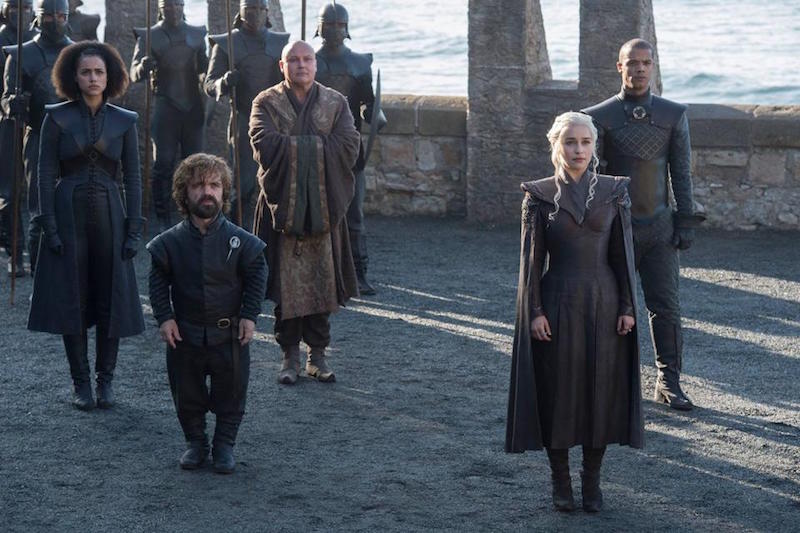 While it’s not too big a leap to guess why we love depictions of sex so much in our media, violence is a bit of a puzzle. Especially when the two become intertwined. For the most part, we are raised to condemn violence.

We are also often traumatized when we witness or experience violence in person. So why do we love watching it so much on television or the big screen?

We say we don’t like violence, but box offices and ratings say otherwise. People eat up slasher films, brutal video games and graphic television like popcorn. Shows like “The Walking Dead,” “Breaking Bad” and “The Sopranos” are famed for their brutality, but few top Game of Thrones in sheer visceral violence and global popularity.

According to the New York Times,  the massively popular “Game of Thrones” is estimated to make at least $1 billion a year. An estimated  9.3 million watch each episode. That’s a lot of people watching and buying merchandise from a show  in which violence is a staple to the narrative.

Characters get gutted, decapitated, crippled, their throats slit, blinded, burned alive, stabbed, castrated and hung from trees, all in rather realistic detail. One scene in the first season shows a woman bent over a pile of slain members of her village getting raped by a group of nomadic barbarians.

Students I talked to who watch the show say the realism of the violence doesn’t put them off. Instead, it makes the fantastical world of dragons, sorcerers, and magic more believable than something like the more tame “Harry Potter” or “Lord of the Rings.”

“I love ‘Game of Thrones,’” said Zach Morgan, a student baking in the sun outside the Campus Center last week.

About that violence?  Morgan has no problem with it.  “How real it is, you know? They’re not afraid to do it. They don’t stop and make things more PG.”

Others shared the same sentiment, excusing the violence for its merits of realism and character depth.

“You get attached to the characters,” explained Rachel Simo, a student enjoying a drink with some friends at the UPub.

“I like it because it’s realistic. Characters die all the time,” said Simo’s friend, Laura Coughlin.

Both are avid fans of the show. As soon as the topic came up, their backs straightened, and excitement filled their faces. Coughlin added that she really liked the war scenes.

Simo was a little more hesitant, saying that “it depends on what it is.”

Coughlin shifted as well after pondering the violence a bit longer: “If it’s war scenes, I’m fine, but the rape scenes, that’s f*cked up.”

A brief silence passed over the table. Another friend, Cory Williams, chimed in. Williams doesn’t watch the show, but is well aware of its content thanks to friends.

“I don’t really question [the violence],” concluded Coughlin, adding, “I probably should.”

But are we secretly sadistic? Are we somehow programmed to seek out violence? Kind of, say some researchers.

Dr. Dayu Lin,  a researcher at New York University’s Institute of Neuroscience and Department of Psychiatry, researches aggressive and sexual behavior using lab mice. She has built a large body of work on the subject.

“They have studies saying the expectation of a fight turns on the dopamine systems,” explained Lin. Dopamine is a chemical that is released during sex, eating and similar activities. This is a feel-good or reward chemical. Lin explained that conflict equates to a contest in our brains, which makes us want to win. And According to Lin, winning makes us happy.

During Lin’s research, a male mouse was put into a cage with two holes to push. Pushing one would signal a researcher to put an intruder mouse in the cage for ten seconds. Pushing the other would do the opposite.

Lin showed footage of her experiments at a presentation on campus. Inside a transparent cage sat a large mouse with a cable coming out of his head to monitor his brain. Every time an intruder mouse was introduced, the original would attack it for ten seconds before a giant gloved hand removed the intruder.

Instead of selecting the hole that meant “I don’t want another mouse in here,” the original mouse would actively choose to have an intruder put in his cage just so he could fight it again.

“In the place [of the brain] we studied, the sexual and aggressive behaviors activated many of the same cells in males,” stated Lin.

Lin went on to explain why simulated violence attracts us so much, citing the rush from horror movies as an example.

“You know for a fact that it’s not real, but you can enjoy it,” she said.

“When there is just a perception of [violence/peril], inhibitors dampen [real fear],” she said. ” The actual flight response doesn’t activate, but you get the aroused state.”

In simple terms, this is the brain letting you have the cake without paying for it. The brain tends to reward things that help us survive or reproduce, so we keep doing these things. This can be seen in the “runner’s high,” or the flood of serotonin we experience after orgasm. The same can be said for when we avoid and experience danger. It’s the rush known to adrenaline junkies and horror fans.

So why does the brain specifically reward aggression? The science isn’t completely in yet. That’s why research like Lin’s is still ongoing, but it does shed a little more light on our fascination with brutality and cruelty in entertainment like “Game of Thrones.”