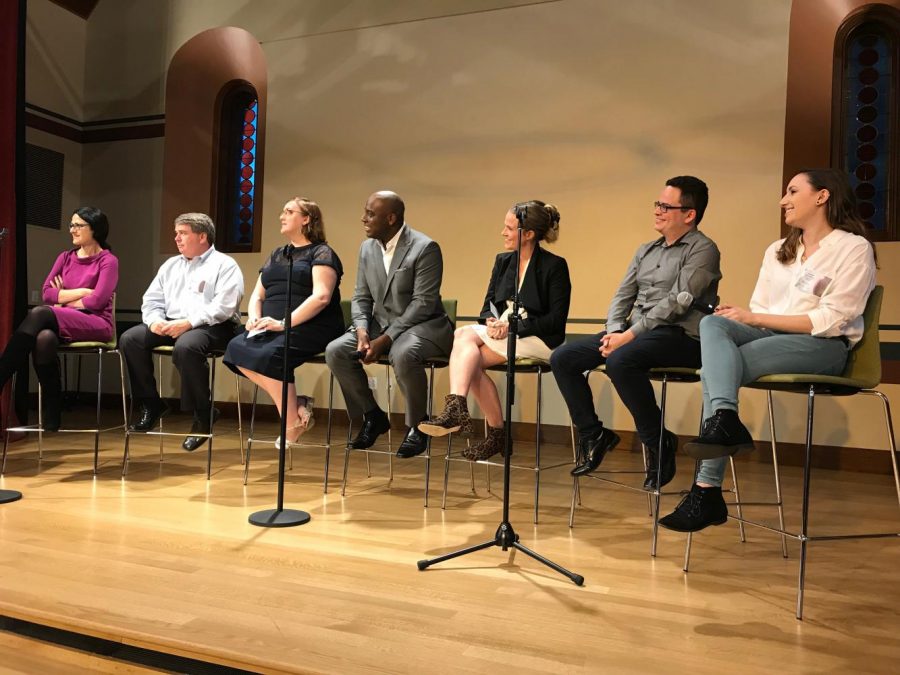 The “journalism all-stars,” as dubbed by members of the UMass Journalism Department, shared stories from their varying jobs —  broadcast, public relations, digital journalism and print. Although the seven-person panel differed in job experience, all were appreciative of their time at UMass.

Panel member Aviva Luttrell is a 2015 graduate and a news reporter for the Greenfield Recorder in Greenfield. During her time at UMass, Luttrell interned at the Daily Hampshire Gazette and was news editor of the Massachusetts Daily Collegian.

As a former news editor at the Collegian, Luttrell said she learned fundamental skills that carried over to her job as a news reporter. She encouraged students to participate in campus media.

“It will teach you so much,” Luttrell said to the students. “You have the freedom to follow your own curiosity.”

Another panel member, Maria Sacchetti, an immigration reporter for The Washington Post and a graduate of the Class of 1991, spoke to UMass Journalism students about the importance of courage.

“There’s a need to have courage,” Sacchetti said. “You must have the courage to pursue the facts.”

During her time as an immigration reporter with the Washington Post, Sacchetti has learned the value of courage when conducting high-profile investigations and forming relationships with sources, especially those in devastating circumstances.

Dan Wetzel is a 1994 graduate and has been a national columnist for Yahoo and Yahoo Sports since 2003.

Although Wetzel is considered an “all-star” at this stage in his career, he joked with students about his time at UMass and remarked on what he would’ve done differently.

All jokes aside, Wetzel advised students to continue to produce quality journalism and stick to the facts.

“There’s so much cheap content out there,” Wetzel said. “Excellent journalism is so important.”

In an age of technological innovation, journalists across the globe are using social media to share their news. Recent 2015 alum Daniel Rodriguez is a part of the new era of digital storytelling and works as a production associate at NBC News Digital.

Rodriguez helps run NBC’s Snapchat program “Stay Tuned,” a newscast that is only minutes in length on the app’s Discover platform.

With a Snapchat audience mostly under age 30, Rodriguez and his colleagues have to sort through a multitude of content and condense it down to a time appropriate for audiences to view.

Shortly after the Las Vegas mass shooting, Rodriguez said he sifted through loads of videos and pictures, making sure the content wasn’t too graphic for the Snapchat audience.

“I saw some scary videos and had to use my ethical judgement about what to show,” he said.

In order to succeed as a journalist, Rodriguez encouraged students to do as many internships as possible. At Columbia University Graduate School of Journalism, Rodriguez interned with “Dateline NBC” and worked on conducting interviews for a high-profile murder case.

“You have to practice journalism in order to learn it,” Rodriguez said. “You have to mess up and take chances. The more you can do hands-on is key.”

Kori Chambers, is a 2003 graduate and a news anchor for WPIX11, a news station in New York City.

Chambers shared a similar outlook on internships and encouraged students to gain as much hands-on experience as possible.

As a college intern, Chambers learned most of his broadcasting skills by working hands-on with broadcasting equipment and forming relationships with professionals in the field.

“All the experience I got with journalism was through internships,” he said.

Chambers’ love of the fast-paced media began as an intern and only grew as he worked his way up to an anchor position where he began to report breaking news stories on live television.

In the rush of the news, UMass Journalism alum Frannie Carr Toth, a 2004 graduate and an editor of WBUR’s opinion page, said that journalists will often be assigned to a story, cover it and then forget about it. But she stressed the importance of self recognition.

“Your work has a real impact,” she said to the crowd.

Panel member Stacey Shackford is a senior consultant for the public relations agency, Bioscribe PR and Communications, and a 1999 graduate.

During her time at UMass, Shackford studied classics, then went on to receive her master’s degree in journalism at the University of Strathclyde in Glasgow, Scotland.

Although Shackford didn’t study journalism at UMass, her love for the field began while writing for the Collegian. Eventually she found herself studying what she was truly passionate about in college — journalism.

She left students with a piece of advice: “Studying what you love is worthwhile.”

After the panel discussion, UMass journalism students and faculty were invited to meet and mingle with the all-stars, with hors-d’oeuvres. More than 120 students who attended the event were given free range to network with the panel.