Turning up the demand for vinyl 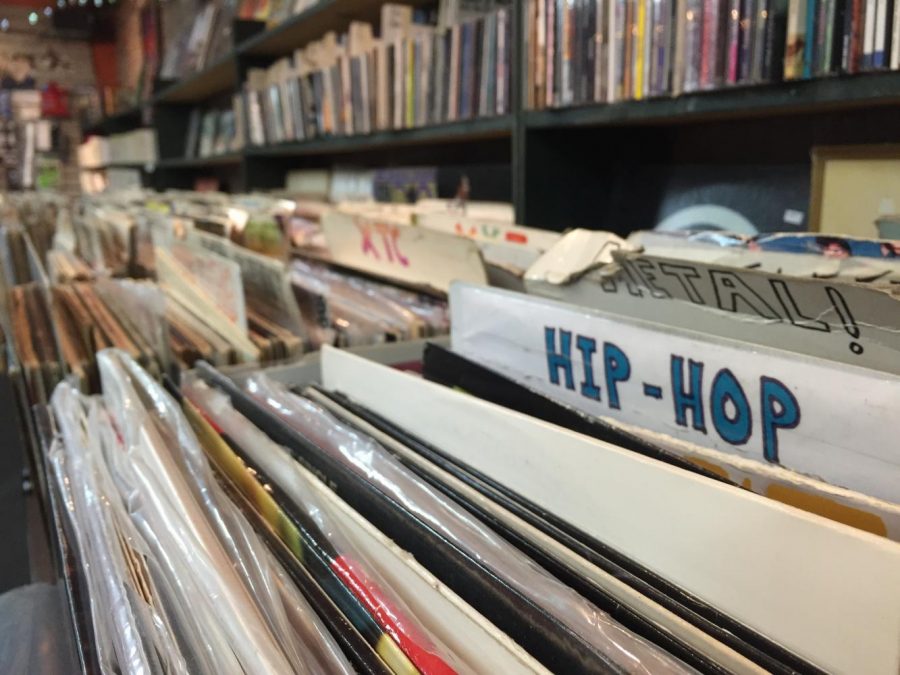 NORTHAMPTON — Of all the trends the 21st century has brought, the revival of vinyl is one thing grandma won’t complain about.

Records have grown in popularity for a variety of reasons, and this niche gains more significance every year. According to the Recording Industry Association of America, revenues from vinyl albums grew to $416 million in 2015. They haven’t been that high since 1988.

“The demand for vinyl has changed greatly,” said Joshua Bean, 41, manager of music store Turn It Up in Northampton. “CDs used to outsell vinyl here by a ridiculous amount, and now that number is minimal.”

Nestled below the sidewalk of Pleasant Street, the store invites customers to descend the stairs and enter a vintage world. The store contains rows and rows of records, CDs and DVDs, and is decorated with yellowing posters and trendy stickers. Old music fills customers’ ears as they shop, serenading them as they travel back in time.

Bean has worked at Turn It Up for over 16 years and has watched vinyl take over the store’s shelves. When he first began, there was only one bin of records. Now customers can find them all around the store.

A music junkie himself, Bean boils the return to the turntable down to two main reasons.

The first reason, Bean said, is that some people just prefer to listen to vinyl, whether it is because of the sound quality or the experience.

The other, Bean said, is nostalgia — and that isn’t limited to older generations that grew up with vinyl.

“I think younger people can have a nostalgia for a bygone time that they missed out on, but they enjoy and appreciate,” he said.

Katie McGauley, 20, is a UMass student who received a record player as a Christmas present last year. From The Beatles, to Mumford and Sons, to The Beach Boys and The Lumineers, she has a humble collection of about 20 records that are both new and old.

“I like the meaning of listening to songs back to back by an artist. I feel like that doesn’t really happen now, and it forces you to listen to the whole story,” she said.

McGauley said people don’t listen to music the way they used to. She likes old music better because of its meaning, and vinyl is a great way to enjoy music of the past.

“I just like the sound. There’s more of a rugged sound, like you were in the studio with them,” she said.

While modern artists have started releasing their albums on vinyl, many old records manage to stand the test of time.

Turn It Up primarily sells older records. When the store does receive more modern music, it’s newer records that people trade in. As demand has grown, the store has expanded its selection of vinyl to keep customers coming through the door.

“I think when you walk into a record store, part of the excitement is the unknown,” Bean said.

How much vinyl is sold at Turn It Up depends on the day. It depends whether or not a really good batch of vinyl has come in. If it’s been awhile since the last good buy, the store will typically sell fewer records.

The record store experience is also part of what makes vinyl so appealing.

“What we try to offer people is a place that people can come and feel comfortable talking to people about music and engaging with other people with music, and obviously finding things that they’ve either always been looking for or never thought they’d find,” said the manager.

Max Passa, 29, strolls into the store like it’s a second home. He’s greeted by Bean, who is organizing CDs towards the back of the store, before peering around at the selection through his thinly framed glasses.

Passa is a regular at Turn It Up. The Easthampton resident has shopped at the store since it opened in 1995, and said his family loves the store as well. He comes in once or twice a week — whenever he’s in downtown Northampton.

“I’m happy when I come in here. All the employees know who I am, and they know my family, too,” he said.

And Bean said he loves running the store for this very same reason: the relationships he builds and community feel it brings.