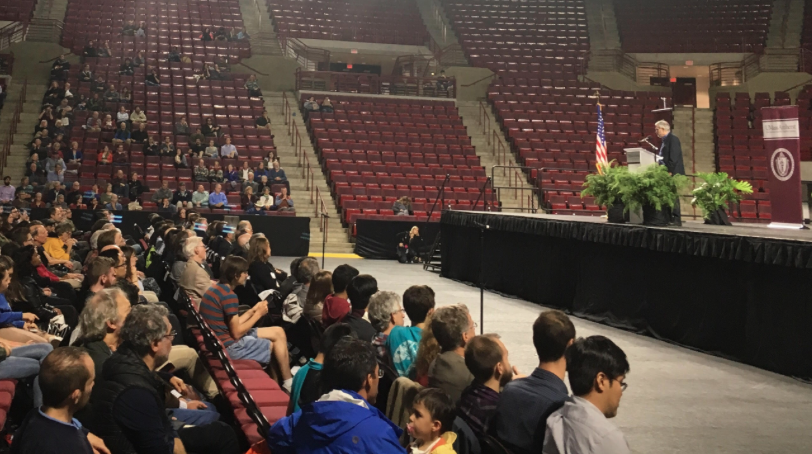 Krugman received the Nobel Memorial Prize in Economic Sciences in 2008 for his work on international trade theory. He works as a distinguished professor at the City University of New York’s Graduate Center and regularly writes columns for the New York Times.

In his lecture, “What’s the Matter with Economics?” Krugman reflected on the shortcomings of the field, particularly before and during the Great Recession of 2008, and spoke about how the field can improve and be more useful in the future.

“Looking back as somebody who’s been a professional economist for a long time, I hope that all this work we do to try to understand the economy makes the world a better place,” Krugman said. “I think this is an occasion to ask ourselves, ‘What have we been doing?’ and ‘Why aren’t we more useful?’”

Krugman said the recovery from the 2008 financial crisis was slow and painful, and that the residual effects of the crash are still being felt in the United States and around the world.

“So why did we seem so ill-prepared to deal with what happened? And why didn’t we do better?” he asked.

According to Krugman, there are two prevailing narratives that answer those questions — neither of which he believes are entirely correct.

He said the first narrative is that “economists had nothing useful to say” when the economy crashed and were “completely unprepared to deal with the crisis.”

Krugman disagrees. He argued that the basic macroeconomic theory pioneered by renowned economist John Maynard Keynes in the early 20th century held answers that could have been more useful in 2008.

“This was not a case of not knowing what to do. We knew what to do. But we went ahead and did some of the wrong things anyway,” Krugman said.

The second popular narrative that explains the shortcomings of economics in dealing with the crisis, Krugman said, is that economists are less influential than they think.

Krugman conceded that there is certainly some truth to that idea, and said that “the reach of economists is always more limited than we think.”

He compared the limited reach of economists to climate change scientists, pointing out that although there is a near total consensus on that issue, policy has not changed in a very significant way to address it.

But this is not a complete proposition, Krugman said. According to Krugman, policy makers in government listened a lot to what economists had to say in the immediate wake of the crisis.

He said their response was “weaker than what a lot of us wanted … but it was in the right direction.”

The problem, Krugman said, was a lack of unity in the field.

“For the first few months after the crash, economists appeared to speak with one voice … But as time went on, that apparent unity fractured, leaving policy makers free to choose the theories that fit their preconceptions,” he said.

The real reason why economists failed to make a bigger difference in the wake of the crisis is more nuanced than either narrative, Krugman said.

“Economics can matter only when we have sufficient realism and are not divided by our own intellectual vices,” he said. “A crucial part of what went wrong is that economics itself got off on the wrong foot. A lot of what we should have known, and used to know, got lost in the shuffle.”

To make a bigger difference in the future, Krugman said the field of economics should return to its roots.

“Good old fashion macroeconomics told us this was going to happen, and we should have listened better,” he said.

Krugman said that throughout the 1970s and 1980s the field began to stray too far from convention and became overly analytical and unrealistic.

To make a bigger difference in the future, Krugman argued that economists occasionally need to put down their calculators and leave the comfort of their office.

“We need to do something we hardly ever do: Go out and actually talk to real people.”