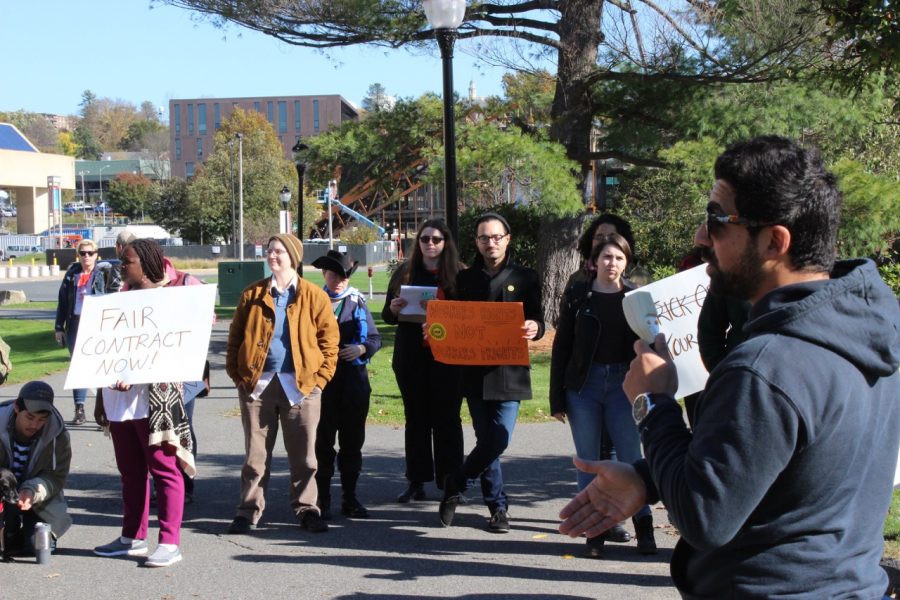 Santiago Vidales addresses a group of protesters on Tuesday afternoon outside of Whitmore (Elissa Borden/Amherst Wire).

AMHERST — Members of the Graduate Employees Organization gathered outside of the Whitmore Administration Building at the University of Massachusetts Amherst on Tuesday to protest in favor of an 18 percent wage increase for graduate student employees.

A crowd of about 40 graduate students met outside Whitmore and shared stories of financial struggle, as well as support for one another. As they spoke, protesters filled out cards with reasons why they need a pay increase to be distributed to administrators in Whitmore in a ‘reverse trick or treat’ style protest. They planned to begin at Whitmore and continue the protest at the Goodell Building.

“We are currently negotiating our contract with the university, we’re in the bargaining process, and one of the biggest, most important demands that we have is an 18 percent wage increase for workers here on campus,” said Santiago Vidales, co-chair of the GEO.

Frustrations have grown high among members of the GEO.  Negotiations have been ongoing since April, when they first brought the idea of an 18 percent pay increase to the table.

Though they have seen a response from the university, members of the GEO say they feel that it was not enough. According to Vidales, Brian Harrington, the lead negotiator from the university who has been communicating with the GEO, offered a 6 percent increase over three years. However, negotiations are still underway.

“We’re in this catch-22 of not really knowing who is making these decisions. And what is at stake is people’s raises, people’s ability to feed their children, and at the end of the day, people’s ability to live in a dignified way so they can finish their degrees in a timely manner,” said Vidales.

Vidales, Co-Chair Alyssa Goldstein, and Member Mobilization Coordinator Nyari Changamire gave a speech to graduate students, before they went inside Whitmore. They shared stories of the struggles graduate students face, as written on the cards. Several of these included times when graduate students were told to go to local food pantries in order to get food for the week.

“A lot of our members have families or are international students, so that 18 percent wage increase it’s not just an abstract number that we pulled out of thin air, it’s a sort of thing that research went into it and it’s the kind of raise that we need to make sure that people are in a better position,” said Vidales.

Mary Dickman, a member of the GEO bargaining committee, said that while she isn’t personally struggling, there are plenty of graduate students who are.

“I don’t have any children but I know people that are international students with children that are suffering,” said Dickman, who moved from Florida to attend school at UMass. “I mean I’m in significant debt just to move here, the four or five grand that I’m working on paying down. So the wage increase would then help alleviate some of the burden of debt that I’m going to get through graduate school.”

In an email, UMass spokesman Ed Blaguszewski said, “We have no comment about the ongoing contract negotiations.”