Sketch 22: The art of committing to the bit

This UMass sketch-comedy troupe is serious about being funny 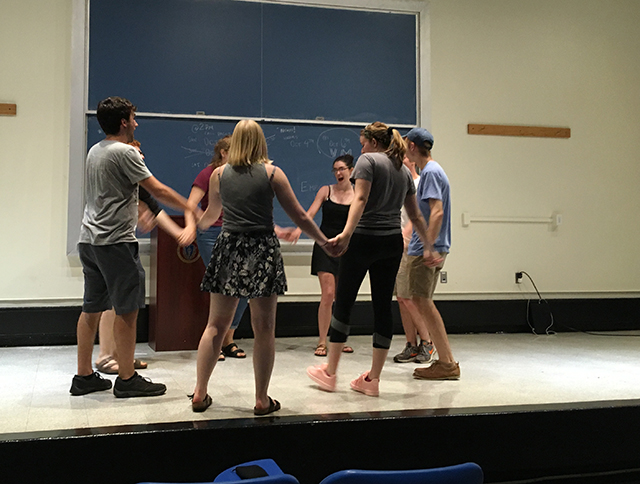 AMHERST — The auditorium in Herter Hall at the University of Massachusetts Amherst can hold more than 200 people, but on a Wednesday at 7 p.m., eight personalities fill the space. Sitting on the stage floor that’s been subjected to their insanity time and time again, they laze around an open bag of cheddar and sour cream Ruffles and catch up.

Tanner Goldberg, a senior theater and English major, stood above the other seven members of the troupe. He wore a gray “Sorry I’m late, I didn’t want to come” graphic t-shirt. It was his turn to check-in.

“My professor every day is like, ‘You should probably take out a piece of paper and pen,’ and I’m like, ‘I’m not gonna do that!’” Goldberg said while throwing his hands in the air.

After each troupe member gave an update about their lives outside of comedy, including academics, work and overall well-being, the group got to work. Over the next two hours, they rehearsed the 13 sketches for their show this week, playfully titled “Fidget S’inners.” Behind their outrageous style of humor is a dedication to do just about anything for the sake of comedy.

They started with the show opener, “Do Re Me Fall Down a Flight of Stairs.” The sketch, written by senior Jeff Heithmar, parodies the Sound of Music classic “Do Re Mi,” and is about students in a residential academic program (RAP), “the Von-RAPs.” In the sketch, the children innocently consider studying all weekend fun and “exchanging numbers” crazy. Soon they are corrupted into what you could call a collegiate reality. The sketch ends with a song and dance to lyrics, “Bud, a beer, a real cheap beer. Class, where no one really cares!”

At the end of the run-through, Goldberg, who was not in the sketch, asked, “So what happened? I definitely felt the energy dip.” The group spoke openly about what they could improve and ran it again.

Formed by a group of comedy-loving students in 2003, Sketch 22 is always changing. Auditions each semester bring new cast-mates, while graduation steals the seniors. This semester’s group is an equal mixture of males and females ranging from sophomores to seniors. They know each other’s strengths, weaknesses and who would be best at playing what character. Above all, they share a passion to make their sketches the best they can be.

As part of the UMass Comedy League, Sketch 22 has two sister troupes, Mission: IMPROVable, a short-form improvisation group, and Toast!, a group that does long-form improvisation. Since Sketch 22 does not improvise like UMass’ other comedy troupes, it requires a different level of preparation and dedication.

“There’s a phrase we use: commit to the bit,” said Andrew Cunningham, a sophomore computer science and computational linguistics double major. “We just have to do crazy things sometimes, and we have to do them right.”

The troupe will go to great lengths to make a sketch successful. They’ll quite literally bear it all, with some even providing their own nude photographs for Friday’s show.

Heithmar, a biochemistry and public health double major, recalls the time last year when they started a show off by running from the Student Union all the way to Herter Hall in their underwear, “like it was an Olympic race.” They live-streamed the race so the audience could see them run through campus, ending in the packed auditorium, “completely exhausted and completely naked.”

Goldberg, a senior who has been in the troupe since his first semester freshmen year, offered an explanation for the intense dedication. It’s simple: they’re “serious about being funny.”

“There is a real striving for improvement and there’s also a wanting to one-up each other,” Goldberg said. “We know that we can write the craziest things for anybody, and anyone will be willing to step up and be like, ‘I’ll be the one you can push down a flight of stairs.’”

And as the video sketch “Stairs” — available on Sketch 22’s YouTube page — shows, they really are willing to do just that for the sake of comedy.

With three shows every semester, Sketch 22 constantly works to produce quality material. From writing, rehearsing, filming and getting props together, putting on a show is a rigorous process. “I spent the last six hours sewing together squirrel tails,” Goldberg said. “Like, I’ve got full-sized human squirrel tails in my car that I just have spent so long on. It just has to get done.”

On Friday, Sept. 29, groups of students collect outside the doors of Herter 231, patiently waiting.

Among the crowd was Eliya Hakim Moully, a senior psychology major who has attended almost every Sketch 22 show since she has been at UMass.

“I love them. They’re creative. They’re really not afraid to break boundaries and make a mess, literally make a mess,” Hakim Moully says. “There were shows that they spilled vegetable oil all over the ground, they broke plates, they’ve had spaghetti all over the room. I love that about them.”

As the clock hits 8 p.m., the doors swing open and the members of Sketch 22, dressed up in all black, screamed. Newcomers to the show jump at the greeting, but most are familiar with their cue to get up and grab seats before they inevitably ran out.

Soon, the same empty chairs from Wednesday’s rehearsal are full.

The stage illuminates and the Von-RAPs are in character ready to perform. They sing and dance through the crowded auditorium, weaving between rows and feeding audience members from Nos energy drink cans.

Becca Regan, the director of the troupe, joins Goldberg on stage in large, brown squirrel tails for the sketch “Squirrel Debate.” The audience laughs at the absurdity of the props within the bit.

Cast members take on the role of the Doritos marketing team, exploring the concept of “sex sells” in the sketch “Dorito Dust.” Their long-anticipated nude photographs, which had been censored with the famous nacho snack, are projected on the overhead screen, and the audience eats it up.

After the final sketch, the crowd roars with appreciation. On stage, the eight members beam with a proud exhaustion that can only come from giving everything to what they love.

They followed through on their commitment to the bit.